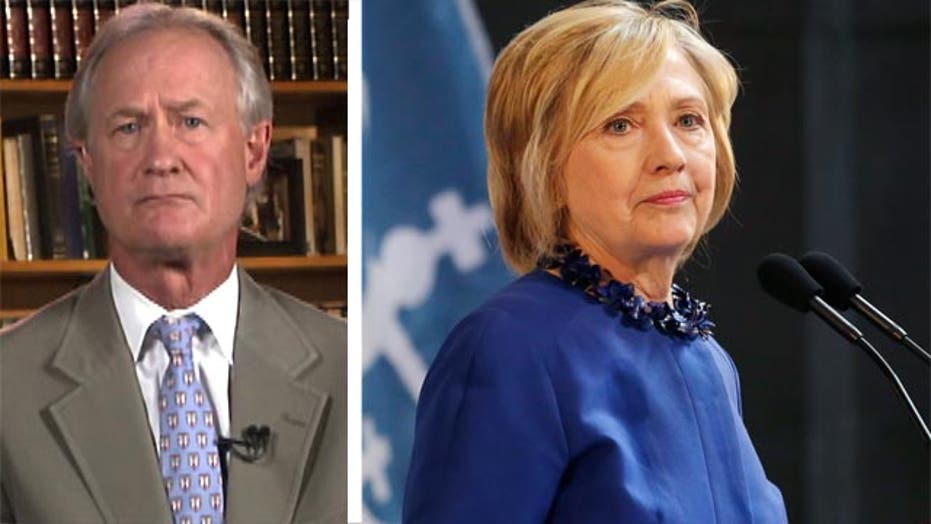 Lincoln Chaffee: Clinton is not the inevitable nominee

Democratic presidential candidate on 'Your World'

This is a rush transcript from "Your World," June 22, 2015. This copy may not be in its final form and may be updated.

MAYOR BILL DE BLASIO, D-N.Y.: I don't think he represents the values of the vast majority of New Yorkers. And I -- as I said the other day, I'm not going the talk about the details of the Republican field.

NEIL CAVUTO, HOST: Well, that's one guy who could be entering the 2016 Democratic race for president.

To another who is already in, former Rhode Island Governor Lincoln Chafee.

Always good to have you, Governor. Thank you very much.

CAVUTO: I think they did.

Bernie Sanders fills that role. Maybe you fill that role. Are there going to be a lot coming out to challenge Hillary Clinton in that role?

CHAFEE: I don't think so. It's not like the Republican side.

On this side, you have just got Governor O'Malley, Senator Sanders, and myself, maybe Jim Webb, former Senator Webb.

CHAFEE: So, this -- the Democratic side is much different.

CAVUTO: Now, it's very early, Governor. I think you would be the first to state that.

CAVUTO: But the one catching fire, at least some -- some at least response on the stump, is Bernie Sanders.

What do you make of that and the fact that he has narrowed the polls mightily, not only nationally among Democrats, but in key races, key states like Iowa, like New Hampshire?

CHAFEE: Well, I have always thought that Secretary Clinton was not the inevitable nominee that everyone portrayed her as, this coronation.

I never thought that was true. And earlier in the show, we talked about -- I heard before going to break all the troubles with the VA, the troubles with Iran. So, that Iraq War vote is still going to resonate. And Secretary Clinton voted for the Iraq War.

We wouldn't have all this trouble if it weren't that mistake of getting into Iraq, and plus the creditability issues. So, I have always thought that this field was going to change. And here it is changing very quickly here in June, with Senator Sanders getting close to Secretary Clinton.

CAVUTO: There is thought that given the fact, you know, your poll numbers have upticked a little bit since you announced, again, not as markedly as Bernie Sanders, but there does seem to be a feeling that, with more establishment Democrats looking at the gains folks like you, Bernie Sanders are making, Governor O'Malley to a lesser extent, but that there is something there that bespeaks of maybe a 1968 development among the Democratic Party, where there's a revolt against the leadership and a hard drive left.

CHAFEE: Well, '68, Gene McCarthy and what happened there.

CHAFEE: Yes, that is what's happening here, I think. And you just can't forgive that Iraq War vote quickly. It's a credibility issue.

CAVUTO: Is that what it all comes down to, Governor, is that is the deciding issue for you and for -- the anger on the left goes back to that vote, despite the fact she comes back and said she regrets it, et cetera?

CHAFEE: I think it's part of it.

And I think the tenure as secretary of state also, where it was the same muscular approach to the world, and didn't really resolve any of the difficulties we had, the conflicts around the Middle East and North Africa, so it was continuation of that unilateral approach to the world that is not working, that is causing us more enemies and fewer friends.

And so I think the people are looking for something different. But that's part of it. Certainly, Senator Sanders is talking about the income disparity.

CHAFEE: There's a lot of anger about that.

So, it's a combination of issues.

CAVUTO: Do you ever worry though that -- and you're a very good student of political history. You mentioned 1968. I didn't even have to coach you through that. You remember Gene McCarthy.

You remember, I'm sure, as well in 1972 when Democrats took a moderate front-runner named Ed Muskie and went to George McGovern. You know how that ended. And that the party is risking driving itself to extremes and losing the vast majority of Americans? What do you think of that?

CHAFEE: Well, this will play out, whether that's true, whether Senator Sanders might appeal to red states, if he really takes off. It doesn't seem likely, a former socialist. But you never know.

And it's a long way to go. So, I think the Democratic Party certainly does not -- after keeping it in '08 and in '12, but losing the House and the Senate, cannot afford to lose the White House in '16. And the experiences of 2000 with Ralph Nader and what happened are resonating in every Democrat's mind.

The reason why I ask, Governor, is that, given the fact that many have turned on the president within your own party on deals like the trade deal and everything else, that it is a hard drive left and that Barack Obama is hardly a moderate, and for the left to turn on him indicates the party is into uncharted, worrisome territory? You say what?

CHAFEE: Well, it's still early. It's June, so we don't how the party is going to react.

So, yes, Senator Sanders is getting huge crowds. But I'm against -- I'm for the president on fair trade. And I support the Pacific trade partnership. So, we will see if Democratic voters want to be more moderate. I'm the only Democrat that is advocating for President Obama and the fair trade.

And I don't mean to disparage some of your competitors, that they might be, but I guess what I'm asking you is this concern, when it comes to issues of trade, whether you think your party is being penny wise, pound foolish, and by being deemed anti-trade or cynically in the pocket of unions, say those that oppose this, that they're killing themselves.

CHAFEE: Well, it's similar to the Republican Party.

Sometimes, on the Democratic side, you get pulled a little bit to the left, especially, as you mentioned, with the union support.

CHAFEE: And I know, now being in the Democratic primary, I get a lot of communications from the unions to oppose the fair trade, President Obama's fair trade.

I'm sure that's what Secretary Clinton has on her mind, the union support.  And so you just have to be brave and explain -- explain to the voters why this is important. And it's going to keep our American jobs here and have rules on the environment and labor. And trade is going to occur in the Pacific Rim anyway. Let's have rules.

CAVUTO: In the meantime, you have made the metric system, and the U.S. going metric -- we're the prominent power that has not -- as a centerpiece of what you're doing. Do you think that was a wise idea?

CHAFEE: I thought it was just one piece of a symbolic move.

CHAFEE: After all the mistakes we made for American credibility, telling the world that we -- that Saddam Hussein had weapons of mass destruction, that was -- that was a false assertion to the world, that we have some repair work to do. And we want to be integrated back into the global community.

CAVUTO: So, that's where the metric comes from, to get in synch with...

CHAFEE: That is. It's a piece.

CHAFEE: It is very symbolic.

CHAFEE: And it is also good for our economy.

CHAFEE: It's good for our economy. Everyone will say that.

CAVUTO: Yes. I guess I wasn't too good at those courses. We will have more after this.