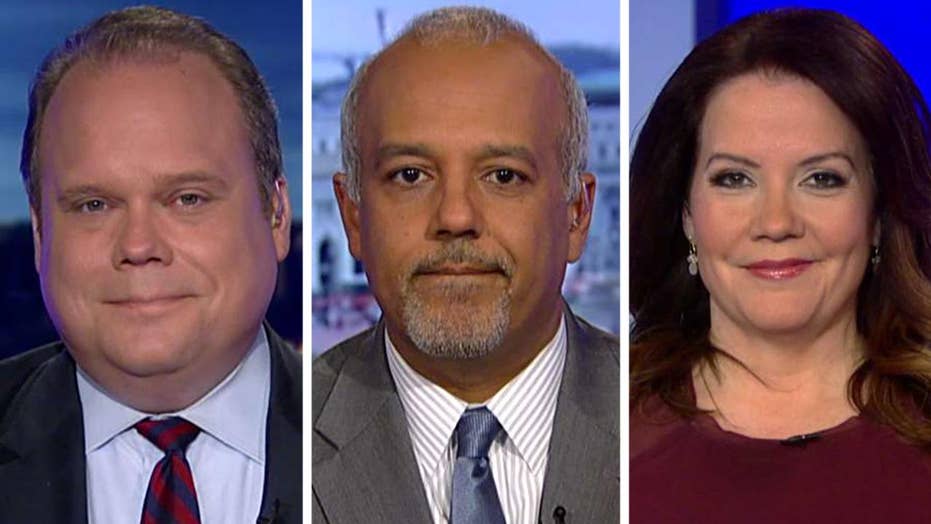 President Trump threatens to shut down border with Mexico; reaction and analysis from the 'Special Report' All-Star panel.

This is a rush transcript from "Special Report with Bret Baier," April 1, 2019. This copy may not be in its final form and may be updated.

SENATE MINORITY WHIP DICK DURBIN, D-ILL.: When the president says he is going to close the border, that is a totally unrealistic boast on his part.

KELLYANNE CONWAY, COUNSELOR TO PRESIDENT TRUMP: It certainly isn't a bluff. You can take the president seriously.

JEH JOHNSON, FORMER HOMELAND SECURITY SECRETARY: By anyone's definition, by any measure, right now we have a crisis at our southern border.

MICK MULVANEY, ACTING WHITE HOUSE CHIEF OF STAFF: Why are we talking about closing the border? Because, not for spite, and not to try and undo what's happening, but to simply say, look, we need the people from the ports of entry to go out and patrol in the desert where we don't have any wall. We hate to say we told you so, but we told you, so.

BRET BAIER, ANCHOR: White House Chief of Staff there, other officials saying the president is serious about his threat to close the border, and is serious about holding back on aid to three countries, Guatemala, Honduras, El Salvador. If you take a look at the last year, or rather 2017 numbers on aid, 2018 data has not fully been reported, but 2017 data, Guatemala, $241 million, Honduras $150 million, El Salvador $94 million. A lot of pushback from Democrats up on Capitol Hill saying that will not help Central America in their efforts.

But let's bring in our panel: Chris Stirewalt is politics editor here at Fox News; Mollie Hemingway, senior editor at The Federalist, and Mo Elleithee, executive director of the Georgetown Institute of Politics. Chris it sounds like the president is serious, and may be moving forward.

CHRIS STIREWALT, FOX NEWS: So, that is a big Matzah ball to put out there, because you are talking about billions and billions and billions of dollars of economic consequences for the United States. It is an extreme move. But there is this. There is a crisis, and now everybody agrees that there is a crisis. Republicans and Democrats are now at a point, whether you want to call that humanitarian crisis or a security crisis, everybody is there now. And I think we are getting to the point where something has got to give. Something has got to give here.

BAIER: And 100,000 last month, possibly. Mollie, the threat is real. Is it designed to get Mexico to get off the ball and do something from their point of view?

MOLLIE HEMINGWAY, THE FEDERALIST: I think you are seeing all of these things where we have been providing aid to different countries, we have been working with other countries, and we're not seeing enough in response. But to me the bigger issue is what is happening in our own Congress. Congress didn't want to work on border wall or border security under threat of a shutdown. Fine. They still don't seem to want to do what they need to do, which is reform particular laws that are incentivizing this crisis that we have.

HEMINGWAY: There are different loopholes that make it so that it's very reasonable to come either as underaged person or travel with an underaged concern that is leading to this crisis, and Congress absolutely needs to do something about it. And I hope that Chris is right, that everybody now realizes it's a crisis. It does seem like people, I think people thought this was just something Donald Trump was talking about, but now everybody realizes it's really happening.

BAIER: To hear President Obama's Homeland Security secretary come out and say, hey, listen, it is a crisis, that is a moment.

MO ELLEITHEE, GEORGETOWN INSTITUTE OF POLITICS: I think a lot of people he agree that there is a humanitarian crisis at the border. And a lot of that is precipitated by abysmal conditions in these Central American countries, which is why people are seeking asylum here. Which is why I wonder if the sort of one-two punch that the president puts out there of closing the border and shutting down all aid might actually have a series of unintended consequences that would be devastating to the United States, the economic engine down there, all these small businesses along the border that are reliant on traffic through the legal points of entry are sweating today.

But you also see most of the programs in Central America he is talking about cutting they are programs that are not direct aid to those governments. It's for programs, humanitarian programs, many of which are administered by the United States. What we need to do is actually improve conditions in these countries, that's the greatest disincentive to coming here and seeking asylum. And I worry if this isn't cutting off our nose to spite our face.

HEMINGWAY: It does seem that people are more willing to do some sort of proactive things like giving aid to other countries so long as we actually have our border security handled, and that's one thing that we really don't have a good handle on. And just having so many people flowing every unmanned entry points is not sustainable, and there just needs to be -- we can give money as long as we lock down our border.

ELLEITHEE: The question is, taking this money away, do we make it even worse? There are a lot of folks out there, experts who have been looking at these programs who say we are actually bringing the number down, that it would be much worse if we weren't putting this aid in, into these U.S.- funded, U.S. programs. And so I just, I worry that it makes it even more challenging.

BAIER: Chris, to your point, Mexico is the third largest trading partner with the U.S., roughly $1.5 billion cross border action every day.

STIREWALT: Every day. And it is one of the most important global border crossings in the entire planet. This is a crucial place, because, of course, one of the things, whether it's NAFTA or MCA, YMC --

STIREWALT: Whatever you call it, the amount of trade that flows across that border every day is mindboggling. And the way of life down there, it is the busiest border crossing in the world for a reason.

BAIER: All right, turning now to the efforts on Capitol Hill to subpoena the full, unredacted Mueller report. How do you see this, Mollie?

HEMINGWAY: I think everyone wants to see what's in the Mueller report and everybody wants to sees a much as possible. I personally would like to see everything in there, all the underlying documents. But I think what you seeing on the Hill are people are trying to sort of salvage what they had going for many years, which was this Russia conspiracy theory, and learning that there were no indictments coming out of the Mueller report dealing with any American, much less anyone affiliated with the Trump campaign for criminal collusion with Russia or for obstruction of justice is a huge deflating thing what's happening on the Hill.

As they get the information on the Mueller report, let's hope that we also get information about how this conspiracy theory started, how it got seeded throughout the federal government, how the investigations, which there were multiple ones against the Trump campaign, got started. We have some information. We need much more. How many wiretaps were levied? What was going on with human informants? I'm all for transparency, but let's make sure we get the transparency on the actual problem.

BAIER: But the likelihood of another special counsel, pretty small.

HEMINGWAY: I don't think so. I think in fact it might be one of only ways that you find out who all was involved, how they behaved. What's most important right is for people to have a restored trust in the FBI and other law enforcement agencies, and you need accountability to get there.

ELLEITHEE: I think we know how it all got started. That's pretty well documented. George Papadopoulos was out boozing --

HEMINGWAY: That is such a ridiculous --

ELLEITHEE: -- with an agent of another government and started --

HEMINGWAY: That's such a ridiculous theory that we know has to be more than this.

ELLEITHEE: It really isn't. But, look, I think the fact that the administration, that the attorney general is going this long without giving us anything, without showing the full transparency that we have been promised from the beginning, without showing, just allows the administration to control the narrative as long as it possibly can. And what you see, I think, are Democrats who, yes, may feel like they have lost the narrative a bit, saying we are not going to let you have the entire narrative either. So let us have everything.

BAIER: You know what we're missing, Mo, is that in the letter that the attorney general sent, he points out that Bob Mueller is working alongside him on the redactions. It's not like Attorney General Barr is just concocting this summary on his own. He is saying here's what I can and cannot put out. I'm going to put out as much as I can.

ELLEITHEE: But at the same time, there really doesn't need to be a prolonged delay. And I think Democrats are trying to pressure them as much as possible for fear that there would be a long delay. So, I'm on board with let us see everything. It's one area where Mollie and I absolutely see eye to eye on it. Let's see everything here. Let's see, and answer some of the questions that remain unanswered at least in public conversation around obstruction. That was left inconclusive, and so let us take a look at it so that we can figure out what next steps, if any, are warranted.