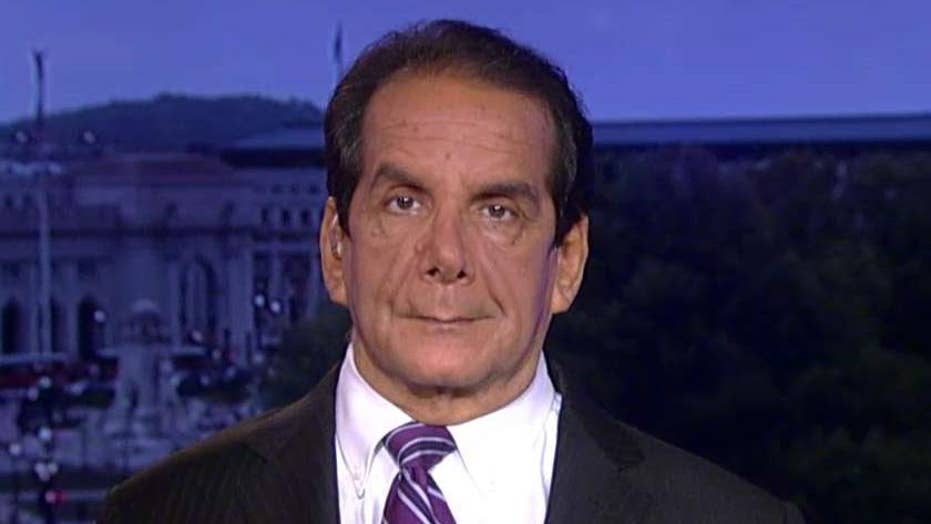 Krauthammer: Steve Bannon is a double-edged sword for Trump

This is a rush transcript from "Special Report with Bret Baier," August 21, 2017. This copy may not be in its final form and may be updated.

STEVE BANNON, WHITE HOUSE CHIEF STRATEGIST: Trump had those ideas, had that energy, had that vision that could galvanize a team around him of disparate -- look, we are a coalition. A lot of people think, have strong believes about different things. But we understand that you can come together to win. And we understood that from August 15th, and we never had a doubt and Donald Trump never had a doubt that he was going to win. And I think that is the power of this movement.

BRET BAIER, ANCHOR: Steve Bannon out as chief strategist at the White House, saying he is going to fight on the outside for Trump against his opponents. But telling The Weekly Standard just within the last hour or so, I'm quoting here, "Bannon was candid and blunt, quote, "The Trump presidency that we fought for and won is over," Bannon said. "We still have a huge movement and we will make something of this Trump presidency, but that presidency is over. It will be something else, and there will be all kinds fights. And there will be good days and bad days. But that presidency is over."

Politico has a headline tonight that says "Get ready for Bannon the barbarian." "In the days before his departure the Trump guru told associates he was itching for a return to guerrilla warfare."

Charlie, when he says I'm going outside to fight for Trump and against his opponents, what is clear is that some of the opponents he sees are inside the White House.

CHARLES HURT, THE WASHINGTON TIMES: I think it's about to get very interesting. I know that there are some people, some Republicans in Washington who are probably cheering at this. But a very significant bear has just been unchained from the White House. And I think that a lot of these people, and you are right, there are going to be some of them in the administration, in the White House. I think there are even more of them up on Capitol Hill who have just earned themselves a new enemy. And I think he is not going to quit.

But I also think that it's we can make a little too much of it as well. There are these issues like the environment or illegal immigration where Donald Trump has refused, has been unshakeable in his commitment to those things that he and Steve Bannon have both been fighting for for a long time. I think in the other areas like Afghanistan and some of these global affairs issues or trade with China, things like that, I think that's where we are going to see a lot of the fireworks.

KAREN TUMULTY, THE WASHINGTON POST: There is nothing linear to the Trump presidency. So to declare that something is over or something has begun is almost, you know, meaningless with this president. But we do know is Trump's world is the Hotel California. He has checked out, but is he not likely to leave. He still has the president's cell phone number.

TUMULTY: Steve Bannon. Is he off the leash in the new sort of order that General Kelly is trying to impose where the White House chief of staff controlled who goes in to and out of the office and who sees the president. But I think Steve Bannon is very much going to be in President Trump's ear.

BAIER: You look back at this interview with The American Prospect that he gave, and some of the things that he said. Among them you have the white nationalist movement. "These guys are a collection of clowns. Ethno-nationalism, it's losers. It's a fringe element. I think the media plays it up too much and we have got to help crush it, you know, help crush it more. The Democrats, the longer they talk about identity politics, I got them. I want them to talk about racism every day. If the left is focused on race and identity and we go with economic nationalism, we can crush the Democrats." In the wake of everything we saw this week it obviously was not a message that was well received.

CHARLES KRAUTHAMMER, SYNDICATED COLUMNIST: I think that was part. It was several strikes against Bannon about that interview. North Korea, the undermining of the president's policy, basically saying it's a bluff and it's an empty bluff. The China part where he said we're at war, economic war with China just when the president is trying to use Chinese influence on the North Korea problem.

And then this. I mean, it may be that they have made their calculation, the president has, particularly when he came out for retaining the Confederate memorials. This is a winning issue. If you look at the polls, it is winning issue. And they want to play this in part to get away from the Charlottesville press conference, but also in part because it's a winning issue, a cultural issue inside the country.

But you don't say it out loud. That's what I think was so amazing about this. Bannon is saying we want race to be an issue. We want the country to be divided over this because we're going to win. So you add that, I think, on the ledger of things you simply don't say in an interview, and you add what I called on the show earlier the "Scaramucci moment."

KRAUTHAMMER: There are certain things that you simply can't say and survive, and he didn't survive.

BAIER: So there are conservatives, Charlie, who are saying that this is the last of the Trumpians besides President Trump himself. And Tucker Carlson earlier on this show said look at everybody else who is advising the president, and would they feel uncomfortable in a Hillary Clinton administration? I mean, what about that for conservatives who look at this administration and say, this is not the one that I saw?

HURT: I think that's a very good point. But it's also worth remembering that Donald Trump is not afraid to roll any of the people around them. And he has rolled a lot of people. He rolls his own daughter on the Paris climate deal. I just I think that the fact that he is -- that Trump himself is the last Trumpian in the White House is a very significant detail. And the loss of Steve Bannon is significant, but I don't think that it necessarily changes all of that.

BAIER: And on the outside, he has a huge megaphone in Breitbart News. He apparently now is back to being the executive chairman and also led the afternoon editorial meeting today. It happened quickly. Executive chairman of Breitbart News Friday afternoon, the tweet went out. He has a lot of information, a lot of inside scoop from that White House that now is at his fingertips.

TUMULTY: And I think, perhaps even more significant than his return to Breitbart is the fact that he reportedly on Wednesday night, Steve Bannon, had dinner with Robert Mercer, one of the

BAIER: Who was the hedge fund billionaire.

TUMULTY: Biggest financiers of his form of nationalism that there is. And so I wouldn't be even slightly surprised if they come up with some entirely new organism for carrying this out.

KRAUTHAMMER: Absolutely. Look, what happened today is that the civil war moved from inside the White House to outside the White House. But the war continues. Bannon is very clearly going after the same list of people he found were undermining the president that he talked about in that interview. He is going to go after them from the Breitbart platform or any other. He's going to go after all the softies as he sees it on policy.

And, you know, this is going to be really a bloody affair. I think he has been immensely strengthened. I mean, who heard of Bannon a year ago? Everybody has heard of Bannon now. And I think the meeting with the Mercers is very significant. He has billions of dollars behind him, the platform, the machinery of Breitbart under him. And he has got a clear free fire zone. He is not held back anymore.

This -- I mean, for Trump, it was quite a risk which is I think why it took him so long to get rid of Bannon. It was a double-edged sword, and he is now going to have to face one of those edges.

HURT: Obviously it's been bloody up to now as well.

BAIER: You look at that list. We put up the list earlier, the 11 firings or resignations since February 13th.

HURT: And then also on the Hill you actually had the Trump administration fail to get key things through. And I think with Bannon on the outside there is a good chance he will be able to help get some of these things through.