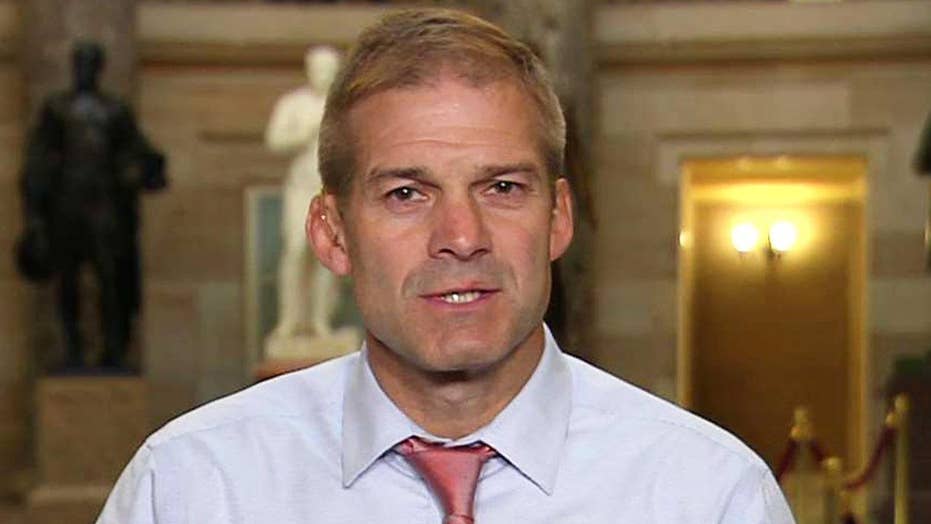 On 'Your World,' the congressman on President Trump working with Democrats on the deal

This is a rush transcript from "Your World," September 7, 2017. This copy may not be in its final form and may be updated.

NEIL CAVUTO, "YOUR WORLD" HOST: What does Ohio Republican Congressman Jim Jordan make of that?

Congressman, others might say, well, if Mark Cuban is praising you, be on guard. But, having said that, he does admire the outreach to Democrats, even though many of your colleagues are annoyed.

Where do you stand?

REP. JIM JORDAN, R-OHIO: Well, I mean, we will see what happens in December.

What I do know is lack of preparation tends to lead to few choices, and those choices that are there typically aren't the best. I think that was the major problem here. We in the Freedom Caucus, we called for staying throughout August and putting together a debt ceiling plan.

And so I think that was the bigger concern. We will see how it shakes out.

What I will say this. We got a three-month increase in the debt ceiling, and we did not do anything to address the underlying problem, which is namely a $20 trillion debt. So, some the options we put forward, we will raise the debt ceiling. We understand that needs to happen.

But we will do it if we actually address the underlying problem, cap spending in the future, do some other things, things that need to happen to deal with this huge debt burden that we currently have.

CAVUTO: Congressman, there was also talk later on in the today that the president was cobbling together another deal regarding the debt ceiling with Chuck Schumer that would end this, this Kabuki theater we go through every 14 or 15 months.

I don't know the details of it, but apparently it wasn't discussed with Mark Meadows, your Freedom Caucus chairman. And when I chatted with him about it, he was just concerned. He could move on. He could understand where the president might have been coming from here to try to clear the deck, so to speak, for tax reform, all of that.

JORDAN: Well, we do need to get tax reform done. I understand that.

And the American people want to keep more of their money to spend on their goals and their dreams and their family. But I do think the debt ceiling gives us an opportunity when it comes around to address the problem, which is namely Congress spends too much money.

So, we have done some things in the past that helped address that problem, helped at least begin to move in the right direction, that understands the magnitude of this problem. And we need to do something.

I would hate to give up the opportunity that a debt ceiling presents to actually go after the underlying and the big concern we have.

CAVUTO: Well, it's a done deal for the time being, right?

CAVUTO: I guess what I'm asking you is, are you frustrated with Speaker Paul Ryan, who was apparently startled by this move himself?

I know, Congressman Meadows, maybe yourself included, sir -- sorry, I apologize for not knowing in advance -- met with Speaker Ryan, expressed concern about how conservative issues were getting buried, and then a lot of priorities were getting sidelined here.

CAVUTO: Are you more concerned about that?

JORDAN: I will tell you this, Neil.

I spent five-and-a-half weeks going across our district, and it was just like I expected. The people in the Fourth District of Ohio and I think people across this country are frustrated because we're not getting done what we told them we were going to do, what they elected to us to do.

And part of getting that done is preparing and putting out a plan early, so you can go have the debate and actually accomplish something that's consistent with what the voters elected you to accomplish.

That hasn't, wasn't done in this process. That's why we wind up, I think, in the position we do. Let's hope that improves. That's what we talk -- I talk with all of my colleagues. I talked with the speaker, talk with all our colleagues about we all need on do that and focus on that. And if we do that, I think the country will be better off.

CAVUTO: The president will outline the details that we're told fairly soon that tax cut that he's working on.

I know you have been working on that, and the leaders in the House and the Senate. But if it doesn't include a tax cut for the wealthy, or it's not as low as 15 percent corporate taxes -- I think Speaker Ryan was saying it might end up in the vicinity of -- I think he said 22, 22.5 percent.

Would you be upset?

JORDAN: I'm for lowering taxes on families, letting them keep more of their money and producing a tax code that's conducive to growing our economy, increasing GDP.

CAVUTO: Well, would that do it, what I said, the 22.5 percent, not 15 percent, if that is where it settles, and for the wealthy, no tax cut?

JORDAN: Neil, the biggest problem is, we don't know any number yet.

So, let's have a bill. Then we can have that debate. We want to put forward a piece of legislation so we can begin the debate.

But the fundamental thing we have to do...

CAVUTO: Where is it? Do we know where it is? I mean, who's coming up with all of this stuff?

So, they have been working on it. But it's time for, show us the bill. Time to see the legislation and have the full debate.

But even with this delay, and getting this whole debt ceiling thing solved, and finding -- kicking the can -- I think you're right -- down the road, you're not quite convinced the time is there to get everything done?

But let's get going and let's get a bill out there so we can have the appropriate debate and actually get something accomplished for the American people.

The biggest problem, though, is trying -- some people want to function in this revenue-neutral world. And we have had this discussion before, Neil.

JORDAN: Revenue-neutral is a fancy way of saying, the burden stays the same, we just shift around who pays what.

JORDAN: Yes, longer -- lower rates, longer budget window, those are the keys that I think have to come forward.

CAVUTO: All right, Congressman, always good talking to you. Thank you, sir.