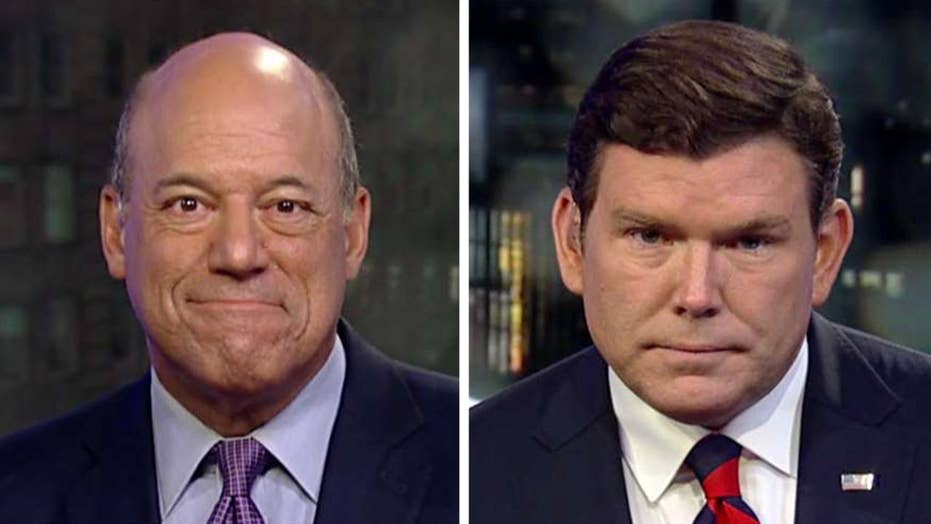 Former Secretary of State John Kerry admits to meeting with Iranian officials; reaction and analysis from the 'Special Report' All-Stars.

This is a rush transcript from "Special Report with Bret Baier," September 12, 2018. This copy may not be in its final form and may be updated.

ALI AKBAR SALEHI, IRANIAN NUCLEAR CHIEF: If we have to go back and we stop the nuclear, I mean withdraw from the nuclear deal, we certainly do not go back to where we were before. We will be standing on a much, much higher position.

JOHN KERRY, FORMER SECRETARY OF STATE: Every secretary of state, former secretary of state, continues to meet with foreign leaders, goes to security conferences, goes around the world. We all do that. And we have conversations with people about the state of affairs in the world in order to understand them. I think everybody in the world is sitting around and talking about waiting out President Trump.

BRET BAIER, ANCHOR: The allegations on Iran policy are that former Secretary Kerry and others are talking to Iran and the Europeans, telling them to wait out President Trump and do a deal with a Democrat in 2021. The president referencing this a couple months ago via Twitter, saying "The United States does not need John Kerry's possibly illegal shadow diplomacy on the very badly negotiated Iran deal. He was the one that created this mess in the first place."

What about this? We'll star there. Let's bring in our panel: former White House press Secretary Ari Fleischer; Philip Bump, politics reporter for The Washington Post, and Bill McGurn, Main Street columnist for The Wall Street Journal. What about this, Bill?

WILLIAM MCGURN, WALL STREET JOURNAL: I think that Nikki Haley is drawing a red line on some of these issues. And I think the Logan Act is pretty silly, right, but I think it was silly when Sally Yates said that was her concern with General Flynn. I'd like to hear what Sally Yates thinks of John Kerry attempts to understand Iran. It looks like a lot more than attempts to direct Iran and advise Iran than simply understand. I think I understand Iran and I haven't met with a single foreign leader there.

BAIER: The reference he's talking about there, Phil, obviously is Mike Flynn talking to the Russians before he becomes national security advisor. How is this different than that?

PHILIP BUMP, THE WASHINGTON POST: It's a fair question. I think we don't know a lot of the details about what exactly Secretary Kerry had done. The Boston Globe first came out with this story, certainly suggested he was doing more than what he said to Dana Perino today, so, this is just sort of what ex secretary of states do.

That said, I think we should keep in mind that this is not necessarily all that unusual. We had this incident in 2015 when basically every Republican senator sent a note to Iran saying, hey, any deal that you make with the Obama administration will only be good essentially for the duration of the Obama administration. There were Logan Act questions that were raised at that point.

BAIER: In part that was, though, Ari, because it wasn't a treaty. And this Iran policy that they are not trying to put the squeeze on Iran, what do you think about that and where it goes?

ARI FLEISCHER, FORMER WHITE HOUSE PRESS SECRETARY: And legislators have a very different jobs than secretaries of state or former secretaries of state. Legislators talk. That's what they do. Diplomats negotiate. And this is a question, what was John Kerry doing? What was he saying? What were the specifics? I don't think it was general. I think he was giving Iran advice about how to wait out President Trump.

And the biggest problem here is Donald Trump is really fixing things in the Middle East, especially when it comes to the two biggest failures of the Iran deal. One is a to address funding of terrorists which Iran has gotten away with, in fact we paid them to fund terrorism, and secondly it did nothing about Iran's conventional missile threat. And if John Kerry is out giving advice to Iran about how to maneuver around what Donald Trump is doing, it's insidious. I don't know if it's legal or illegal, I don't care about that side of it. It's wrong. We should support whatever administration is there as Americans and then take your opposition out domestically on our soil to oppose Donald Trump if you oppose him.

BAIER: On the policy, Bill, Iran is clearly feeling the pinch. And the Iran parliament is rising up, saying this is not going to stand. And it's just starting, it sounds like.

MCGURN: There's a lot of bluster. Iran has been a thorn in our side for a long time. I think it's responsible for deaths of American servicemen in Iraq over the years, supplying IEDs and other kinds of equipment. I think it's an enemy of the United States.

I'll just say, John Kerry has a history of this. Wasn't he over in Hanoi too when Hanoi was our enemy. And Philip raises a great question. I think you were alluding to the Tom Cotton letter when they were negotiating the Iran deal. John Kerry acted very angrily when someone was doing that to him.

BAIER: Yes, I want to raise this next point, which is the election executive order today, take a listen to the national intelligence director.

DAN COATS, DIRECTOR OF NATIONAL INTELLIGENCE: This order leads us and directs us as an intelligence community to assess whether or not there has been any individual, entity, country, that has authorized, directs, sponsors, or otherwise supports interference in a U.S. election.

BAIER: Phil, it sounds like the president wants to take a more active role in saying, hey, look, we are going to punish anybody who does this.

Part of that is of course Congress wants to be able to be the ones that are exacting that punishment. But I think that this is the sort of thing that people have been calling on him and his administration to do. We have seen in the past that there have been times that Trump has seemed a little timid about engaging with adversaries, and the administration has then stepped in and taken a hard line, particularly on Russia. And I think this gives him the ability to do that.