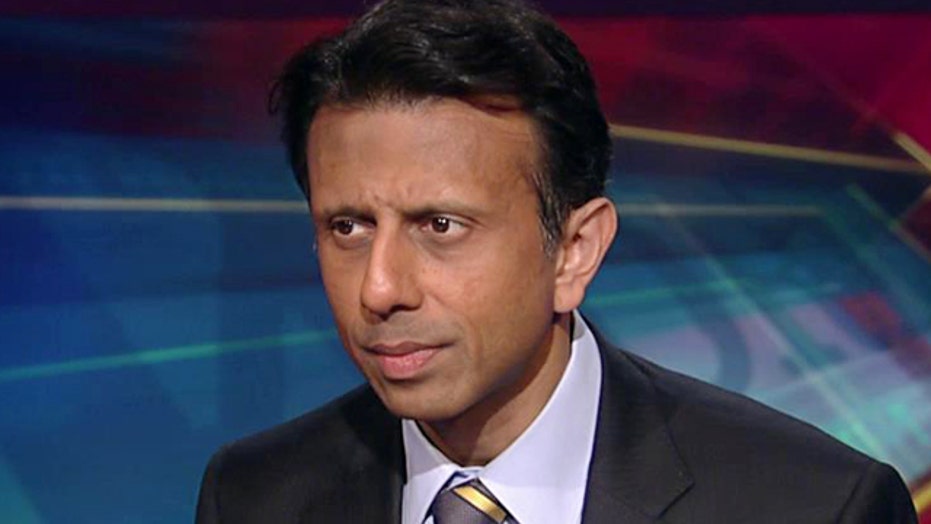 Jindal on Obama's gun control comments: 'Now's not the time'

This is a rush transcript from "Your World," June 18, 2015. This copy may not be in its final form and may be updated.

NEIL CAVUTO, HOST: He was referring us to the president's comments on this earlier today, the present commenting on the shooting in South Carolina.  Take a look.

PRESIDENT BARACK OBAMA: Now is the time for mourning and for healing. But let's be clear. At some point, we as a country will have to recon with the fact that this type of mass violence does not happen in other advanced countries.

It is in our power to do something about it. I say that recognizing the politics in this town foreclose a lot of those avenues right now.

CAVUTO: Sadly, these kinds of things do happen in other countries. We don't have full title to most violent place on earth here.

Just going through some of more obvious ones very recently, in the Eastern Ukraine, we had an attack that killed 13 people, a shooter in New Brunswick, Canada, who killed three Royal Canadian Mounted police. I could go on to talk about those in the Philippines, in what is the old Bulgaria, the Czech Republic, dozens killed in all combination and all variety of attacks courtesy violent gunmen, of course, one of the more famous, in Norway, that took out close to 70 children.

So it's not just our country. It's the world.

And to Louisiana Republican Governor Bobby Jindal on if now is the time to necessarily be targeting guns or make this a unique American drama.

Governor, very good to see you.

I take the president at face value that he is stricken, as we are all, when we hear incidents like these. But then to bring guns into and it talk about how this is a unique American problem, it seems to be a world problem.

GOV. BOBBY JINDAL, R-LA.: Well, I think it's completely -- you're being very polite.

I think it was completely shameful. Within 24 hours of this awful tragedy, nine people killed at a Bible study in a church, now, let's stop and think about that. Nine people coming into the church who are saying -- to praise God, to study's God Scripture gunned down.

This monster then says he is going leave some victims alive so they can go tell the world what he has done. Within 24 hours, we have got the president trying to score cheap political points.

Thank God for law enforcement for capturing this monster, and there's no other word for him, this monster so quickly. He has got a job as president to help begin the healing process, to unify us. For whatever reason, he always tries to divide us. Today was not the moment.

CAVUTO: But one of the things that comes up -- and I know you're entertaining a possible run for president yourself. And if you were to become president, sadly, I'm betting, you would have to deal with issues like these, and maybe more than you would like, and that was the gist of the president's remarks, that he deals with this a lot and he thinks it's because of the easy access to guns.

If you were to become president, would you, do you think you should, rein in that easy access to guns?

But now is not the time. My point is, whether he and I agree or not, now is the time -- look, there are children wondering, why do things like this happen? There are families at home trying to understand, how does it happen in a church?

CAVUTO: Do you think easy access to guns has anything to do with it, or easier?

JINDAL: I think, for today, what the commander in chief should have done, he could he emulated what Nikki Haley did. What a great example, a great governor of her state, coming forward and speaking for the people of South Carolina, saying our hearts are broken and literally having that candid moment on TV.

You could see the emotion. You could see -- that's beginning the healing process. The president could have asked the country. He could have said, instead of talking about politics today, we're not Democrats, Republicans, independents, blacks, whites. We're Americans, and we all need to worship together. We need to -- what would have been great sign is to call for people to fill those churches, because don't let anybody be scared from going to church.

We're not going to deterred from lifting our prayers...

CAVUTO: No, no, I hear what you're saying. But the president started this debate today, if you don't mind my continuing to indulge it.

So, I guess what I'm asking you is, is this an issue, today, the timing notwithstanding, that should be addressed, or is this going beyond access to guns, that we have just more incidents of violence globally, period?

Well, look, I will say a couple of things real quick. In Louisiana, we have done things to make sure that the mental health records are part of the background check, part of the federal system. That was existing law.  It should be done. I know other states have taken those steps.

Let's be honest. There's evil in the world. What you're seeing today, what we saw last night, that was evil. There are -- and that's...

CAVUTO: So, we were looking for ISIS evil. And this kid doesn't appear to have anything to do with ISIS.

JINDAL: And law enforcement will figure out what his so-called motivations were.

We shouldn't try to pretend we're going to understand his mind.

JINDAL: I would love to tell you there's some predictable line between A and B.

Look, the problem is this president thinks the government can answer every problem. There is evil in this world. Ironically, I was in South Carolina just a few days before this, calling for a spiritual revival.

And the reality is, we know there is good and evil. I have got -- as a father, I have got to reach my kids that bad things sometimes do happen to good people.

CAVUTO: But now you have got to teach them too that it's not only you go to a theater -- and there are fears of that, the trial of that -- shooter going on as we speak -- but now when you go to churches.

CAVUTO: I mean, what -- kids, all folks are going to be concerned, now, regardless of whether this is access to guns or not.

As a governor, as a potential president, what do you do? What message to do you send?

JINDAL: Well, I would say a couple things.

CAVUTO: What about metal detectors?

JINDAL: Look, I would leave that up to the pastors. They can decide what is best in their situations for their sanctuaries, for their -- I want the church to be a place where anybody can go.

I think what the president can be doing is, this is a teaching moment, but not about politics or guns or anybody in America. It's saying to our children, look, bad things do happen to good people, but we believe in an all-powerful, loving, forgiving God. Some things will only make sense in his kingdom. There's evil in the world. I'm a Christian. My faith teaches me that there's evil and sin in the world.

Government is not going to eradicate evil. And that's why it would be also a good time to call America to prayer. That president doesn't seem to like to do that, but it's an important, important part of our country's tradition.

CAVUTO: All right. He's got 18 months left, right, or thereabouts.

And now the focus seems to be on what will be the tone of the next president or whoever takes over now. Many argue the Democrats have driven far left on a lot of populist issues, torpedoing the president's wishes on trade. Republicans today cobbled together something that they hope will lead to a trade pact before the July 4 recess.

But having said that, Republicans seem to be tripping over themselves who can off the lowest taxes. Rand Paul comes to mind, Governor, with a 14.5 percent flat tax. I guess it's flatter than other flat taxes. But he freely acknowledges in this proposal that it will mean over 10 years $2 trillion less in revenue over the next decade.

And I haven't looked at his proposal. I don't know all the specifics. But I do think we need to shrink the size of government, not slow its growth rate. We need a lower, flatter tax code. That means Republicans have to give up their carve-outs, just like the Democrats.

Both sides would say no special treatment.

CAVUTO: Well, what are your proposals? He has a 14.5 percent flat tax, one size kind of fits all. Others say that's regressive.

JINDAL: Well, look, if I were to become a candidate, we would often a detailed tax reform policy.

CAVUTO: So, you would cut it.

JINDAL: But we also have to cut spending.

JINDAL: We also have to cut spending as well.

CAVUTO: I understand that, but how low would you cut?

We have spent -- now we're averaging 22 percent. It's usually been lower than that. And with 20 percent, we have got to get back at least to those historic norms. We have got to cut the size of government.

JINDAL: Well, again, look, we will sit down and figure out a comprehensive tax plan, but it needs to be lower and flatter.

CAVUTO: That's going to be part of your announcement next week?

JINDAL: Well, we will make a decision whether to run next week.

I'm saying, if we run -- we have already offered details plans on energy, on health care, on defense, on education.

CAVUTO: There's no doubt that you're going to run, though, right?

JINDAL: If we become a candidate, we will have detailed plans on tax...

CAVUTO: And you will let me know?

CAVUTO: You will let me know?

JINDAL: But it needs to be pro-growth. And that's what the Democrats -- it's not about redistribution. It's about growth.

Governor, thank you very, very much.