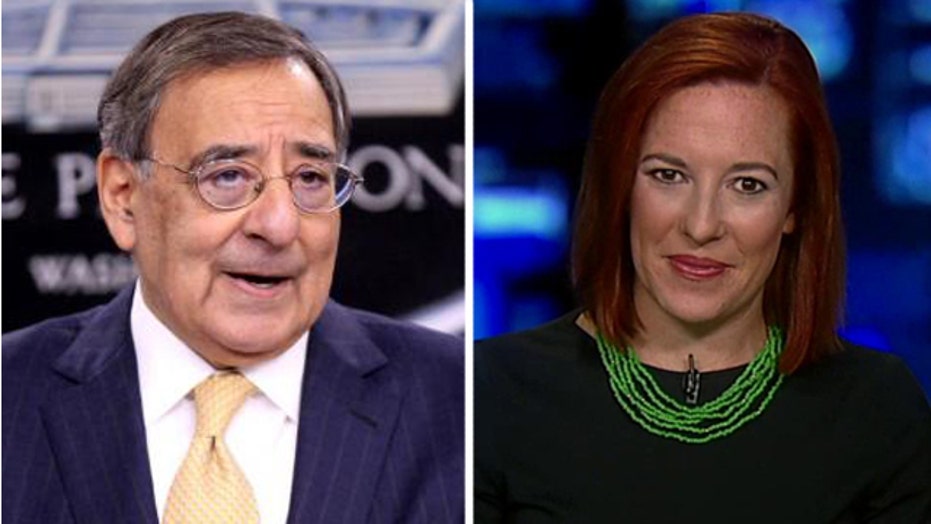 This is a rush transcript from "The Kelly File," October 2, 2014. This copy may not be in its final form and may be updated.

MEGYN KELLY, HOST: Breaking tonight, the president's battle plan in the Middle East takes a major hit as former Defense Secretary Leon Panetta suggests that Mr. Obama's own actions are directly to blame for the chaos we are seeing today.

Welcome to "The Kelly File," everyone. I'm Megyn Kelly.

It was just weeks ago that when questioned about the vacuum left in Iraq after all U.S. troops left, President Obama declared that removing the troops wasn't his decision.

PRESIDENT BARACK OBAMA: What I just find interesting is the degree to which this issue keeps on coming up as if this was my decision.

So, let's just be clear the reason that we did not have a follow on force in Iraq was because the Iraqis were -- a majority of Iraqis did not want U.S. troops there. And politically they could not pass the kind of laws that would be required to protect our troops in Iraq.

KELLY: But Secretary Panetta, who served as both secretary of Defense and CIA director under President Obama, says the Pentagon and the State Department both wanted a residual force, but the president did not.

He writes in his new book, "Worthy Fights" that as he and others were objecting to the complete withdrawal of the troops, quote, "The president's team at the White House pushed back, and the difference is occasionally became heated. And those on our side viewed the White House as so eager to rid itself of Iraq that it was willing to withdraw rather than lock in arrangements that would preserve our influence and interests."

Earlier tonight, I spoke with Jen Psaki, spokeswoman for the State Department.

KELLY: Thank you very much for being here. We appreciate it.

So, your reaction to that direct accusation by the former CIA director and secretary.

JEN PSAKI, STATE DEPARTMENT SPOKESWOMAN: Well, Megyn, let me first say that Secretary Panetta is someone who has had such a distinguished and well-respected career in public service and a range of positions as you know.

But what happened in 2011 was that there were two major factors, one was Iraq is a sovereign country. They decide with cooperation with the United States of course what kind of presence there would or wouldn't be.  The second is we didn't have the troop protections that we needed. There were legal challenges there. There was a desire to have that go through the parliament. And that just wasn't going to be politically possible.

KELLY: OK. But the reason it wasn't politically possible -- and this is what Mr. Panetta is saying and this is what Secretary Gates said and this is what many have said -- the reason it wasn't possible is because the number of troops being offered by the administration, by President Obama, was so paltry and so under what the Pentagon was recommending, what the State Department was recommending, that it was a joke for Maliki. He couldn't take the political risk of going back to his country and saying, "Hey, give them immunity, they're going to give us 5,000 troops," when our Pentagon was saying," Mr. President, you need to give them at least 24,000, the least option we have available to us is 10,000, but that is not wise."  And the president ultimately said, "We'll do five" and Maliki said, "No deal."  How do you blame that on Maliki?

PSAKI: Well, look, one, I think a number of people including Secretary Panetta have spoken to that exact question over the course of the last couple of years.

KELLY: He has. And it's not favorable to the president, what he's saying.

PSAKI: Well, we're not placing blame on anyone. But we're placing -- the facts are the facts here.

PSAKI: Megyn, the facts just don't align with that. The fact is none of those individuals you named would have left our troops there without the protections they needed.

KELLY: If he offered more troops they would have gotten the protection.  That's their allegation.

PSAKI: We could not force Iraq, a sovereign government, to accept a presence there.

KELLY: If we had offered a greater presence, we would have gotten the immunity.

KELLY: Let me -- but this is the issue. Our general said, we need 24,000. The President said I'm not doing that. That's too many. They said the bare minimum is 10. He went back to Maliki with five. Maliki was politically exposed because a lot of the Iraqis were like the Americans, immunity. He needed it to be a substantial enough force that he could take the political risk. Five thousand wasn't going to do it. If we had offered 24,000, we would have gotten the immunity. And we would have had a status of forces agreement.

PSAKI: One, there's no way to know that. That's an accounting of fact -- or accounting of details that isn't consistent with many people who were there at the time. And regardless, even if we had had a presence there, had a residual force there, that would not have prevented and changed the facts that we've seen over the last eight months.

KELLY: Much different scenario. But we had basically won the war after those 175,000 troops were there. We had won. The Vice President said that Iraq can go down as the administration's greatest success.  Things changed after we did the surge in Iraq. We were doing much better.  And then the president's critics say, we snatched defeat from the jaws of victory because we pulled out the troops and there was no one there to protect the gains.

KELLY: It's not Megyn Kelly arguing it. It's Leon Panetta who is in a much better position to know. He talks about how, "I voiced to the President that this country could become a new haven for terrorists to plot attacks against the United States" if we withdrew all the forces. Isn't that exactly what happened?

PSAKI: That is not what happened. Also, the growth of ISIL was not just in Iraq, it was because of safe havens in Syria where they were allowed to grow and prosper for the last couple of years.

The president when he was running for re-election, Jen, went out there and had a debate with Mitt Romney in which Mitt Romney said, I think you agree with me that we should have had a status of forces agreement that would have left these troops in Iraq. The president denied it. The president didn't say, you're right, I did want one, but Maliki and so on and so forth.

Let me play the exchange for you.

MITT ROMNEY, R-FORMER PRESIDENTIAL CANDIDATE: With regards to Iraq, you and I agreed, I believe, that there should have been a status of forces agreement.

ROMNEY: Oh, you didn't? You didn't want a status of forces agreement?

OBAMA: No, what I would not have done is left 10,000 troops in Iraq that would tie us down. That certainly would not help us in the Middle East.

KELLY: There it is.

PSAKI: Well, Megyn, the facts are that the secretary of state, the secretary of Defense at the time, many other members of the administration would not have been negotiating with the government of Iraq about having a presence there if it wasn't supported by the president of the United States.

KELLY: That's not what Mr. Panetta says though, Jen. This is your department. He's saying in his book that state and Pentagon, and Defense, were on the same page. But the folks at the White House who worked for the man who ran -- who ran on the promise of getting us out of Iraq, that they were in a heated disagreement and they couldn't convince the White House that if we didn't keep these troops there, this was going to create a vacuum that would create a safe haven for the terrorists. That they couldn't convince them. And now Leon Panetta, an honorable man, I mean, you don't think he's misleading us in his book, do you?

PSAKI: I think I just stated how honorable he is.

KELLY: Right. So why can't we just accept that that is what happened and then talk about why it happened. Why is there a disagreement? Why does the president come out to try to tell us now that he wasn't responsible for this decision when he sat across from Mitt Romney and said, yes, I made the call because I didn't want to get bogged down in the Middle East with 10,000 American troops still there?

PSAKI: Well, Megyn, first of all the facts of what happened on the ground at the time, I should say, or that we didn't have the protections for troops to remain there.

PSAKI: That is just simply not consistent with what happened at the time. There are a range of people who were involved in this. I know you're referring to --

KELLY: Including Leon Panetta. And he says it happened the way I'm saying it.

PSAKI: Megyn, first of all, there were events that didn't allow us to keep the troops there. There are accounts that people look back and say it could have, should have, would have. We couldn't keep troops there because the Iraqi government did not want to have troops there. Period.

But let me ask you this, this is one of the reasons why, you know, people are focused on this.  And you can see it in the polls. People want to understand what's happening. And they're worried, obviously. Everybody's worried.

PSAKI: Sure, of course.

KELLY: Because President Bush was asked even today by our own Brian Kilmeade who interviewed him, about why he didn't withdraw the troops. Why he thought it was important to leave them there. And he referenced with Mr. Bush an earlier prediction he made back in 2007. I want to play the exchange because it just happened today. And get your reaction to it.  Standby.

BRIAN KILMEADE, CO-HOST: You knew it in 2007. In fact, this is George Bush, President George Bush in 2007 before the surge.  You're trying to tell people we need a surge. And here's why. Here's what you said. And here's how accurate it is.

THEN- PRESIDENT GEORGE W. BUSH: Begin withdrawing before our commanders tell us we're ready, it would be dangerous.

It mean that we would be risking mass killings on a horrific scale. It would mean we allow a terrorist to establish a safe haven in Iraq to replace the one they lost in Afghanistan. It would mean increasing the probability that American troops would have to return at some later date to confront an enemy that is even more dangerous.

KILMEADE: How did you know?

BUSH: Well, I know the nature of the enemy.

So, we're back at the same place where there were challenges that prevented us from having a residual force. And we don't believe it would have prevented the circumstance that we've been dealing with over the last eight months.

KELLY: Jen, it's been fun having you on. I appreciate it. You and Marie had done a good job coming on in the program. And all the best to you both.

PSAKI: Our pleasure. Great to be here. Thanks, Megyn.