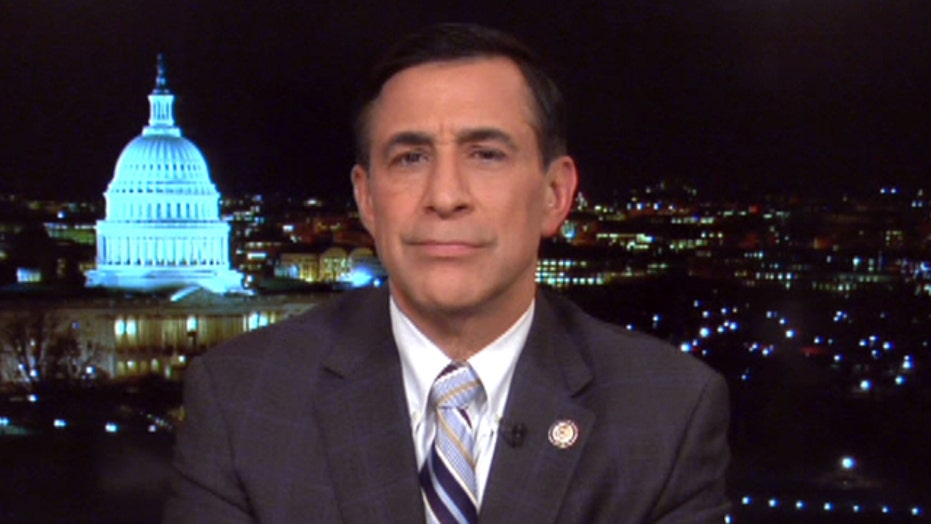 This is a rush transcript from "The Kelly File," March 6, 2014. This copy may not be in its final form and may be updated.

MEGYN KELLY, HOST: Allegations of racism and oppression as Democrats demand the powerful Republican looking for answers in the IRS scandal lose his job.

Welcome to "The Kelly File," everyone, I'm Megyn Kelly.

Democrats are fired up over House Oversight Committee Chair Darrell Issa and how he handled the hearing into the IRS' targeting of conservative groups. They are outraged that Congressman Issa adjourned that hearing without allowing his Democratic counterpart to speak, sparking this exchange yesterday.

CUMMINGS: But first, I would like to use my time to make some brief points. For the past year, the central Republican accusation in this investigation --

ISSA: We're adjourned. Close it down.

CUMMINGS: Directing -- against the White House. Before our --

What is your question?

CUMMINGS: If you will sit down and allow me to ask a question, I am a member of the Congress of the United States of America. I am tired of this.

ISSA: I gave you the opportunity to ask a question. You have no question.

CUMMINGS: I do have a question.

ISSA: I gave you the opportunity to proceed.

CUMMINGS: Mr. Chairman, what are you hiding?

Also today, chairwoman of the Democratic National Committee Debbie Wasserman Schultz compared Chairman Issa's behavior to a dictator in Venezuela and to Russia and the Ukraine, oppressing the masses.

Just hours ago, Democrats pushed a former resolution to condemned Chairman Issa on the House floor. They wanted his leadership power stripped of him. That resolution died along party lines.

A short time ago this evening, I spoke with Chairman Issa who maintained that Mr. Cummings had no right to speak since he said this was a hearing that was a continuation of one that begin months ago in which all parties were heard. And wait until you hear what else he said.

ISSA: Mr. Cummings and I both had opening statements nine months ago, he asked me before the hearing, if he would be allowed to make an opening statement, I said no, this is a continuation of a hearing specifically recessed. I then adjourned the hearing. After I adjourned, Mr. Cummings, in what appears to be a pre-staged event, then went into this I have a right to talk, and screaming and so on.

I broke no rules. I did exactly what is according to the books. I had a script in front of me that has been approved by the parliamentarian, and I followed it.

You know, it's sad, my last chairman, Chairman Ed Towns and I were dear friends, we worked well together. Elijah Cummings got this job quite frankly by saying, he would be different than Towns, that he's hold me to a stop, he'd keep me from accomplishing anything.

KELLY: I get that Mr. Chairman.

ISSA: And that is what the investigation is.

KELLY: I apologize for interrupting you, but I have a lot of questions I want to get to. I get the deal with the IRS that you're looking for answers. But the point is, he was going to make a statement, he is probably going to rip on you, from the beginning of what we heard from you, we're going to rip on you. But who cares, so let him have his couple of minutes to rip on you. You're a big guy, you can take it. And then you wouldn't have distracted from the issue that you were trying to call attention to.

ISSA: Of course. Megyn, anybody would do something over again if they could. But the fact is I had adjourned the meeting before he asked. He didn't raise a point of oral or parliamentary inquiries, the normal ways, the people, especially as experienced as he did. He asked -- can I ask you a question, I said we've already adjourned, but go ahead and asked a question. He then went into that diatribe and point --

KELLY: All right. So, you were irritated. You're irritated by you're saying anybody would like to do it over again. Do you apologize to Congressman Cummings?

ISSA: You know, I broke no rules, and he broke the decorum of the House, but I might mention that several years ago, Henry Waxman pounded a gavel and said he would have me removed because I was pointing out that he was breaking the rules. We didn't launch any sort of House attempt, and I certainly didn't say that he was somehow anti-Arab-American.

The fact is that I did things according to the rules, I followed a script and then Mr. Cummings decided to have quite a hissy fit. The truth is, if he wants to talk I give him lots of changes to talk. And we're going to have additional hearings on the IRS. Ms. Lerner -- he had a chance to speak as much as he wanted in the vote. Which by the way --

KELLY: I get that, you're not going to shut down your probe of the IRS just because of this dust-up. And 71 percent of the American people agree with you, because the polls show as recently as late February that they want the IRS investigation to continue. This is a side issue. Because people are saying that the Democrats are now using this. I mean, the Democrats are using this against you and are making a big deal out of this. And you're a powerful man and you're one of the only people who's pushing on this investigation. So now even some Republicans are mad at you because they feel that you've distracted from what is a legitimate issue, and it's now become about, oh, does Darrell Issa want to shut down debate? As Elijah Cummings put it, does he want to shut out the minority voice? Is that what Republicans stand for? Shutting down -- not minority African- American, minority in the House -- the Democrats' voice?

ISSA: Well, actually, the accusation was that I was somehow anti- African-American. That kind of accusation I think is beneath response. But the fact is that next week I'll be working with Mr. Cummings on legislation that we're both involved in. And, you know, he lost his temper, he screamed and yelled after the adjournment. And quite frankly, he had a simple ability to say, I would like to have a recorded vote on adjournment, I'd object to adjournment, he didn't do any of that. He asked if he would be able to ask a question, and then yes, he did irritate me because he said he wanted to ask a question, and then he went into this diatribe accusing me of somehow being in a witch hunt.

Now, you know, if I had to do it over again I probably would have set there for a very long time, let him say a lot of things and then, you know, walked away. But you know what? We're all human. It was a long day. I didn't break any rules. I did everything according to the rules. He was not denied any due process. But in fact when the Democrats were in charge for the first two years of President Obama, they didn't do no such hearings, they found no accountability.

KELLY: Well, I mean, I understood. And in your defense, when Nancy Pelosi was in charge, she shut off the lights on Republicans trying to make their voice heard, more than once. And over in the Senate, Harry Reid is actually changed the rules to shut down debate based on 51 votes instead of 60, which has caused a lot of raised eyebrows as well.

Chairman, I have to run. I'll give you the quick final word.

ISSA: The quick final word is that Mr. Cummings periodically asked for more time and he always gets it. Sometimes he goes on for 10 minutes in opening statements. I never stop him. The fact is yesterday, one of those time in which I had adjourned, and according to the rules I was done. Thank you.

KELLY: I got it. If you keep going, we will have to cut your mic.

ISSA: That happens on TV.

KELLY: Good to see you, sir.