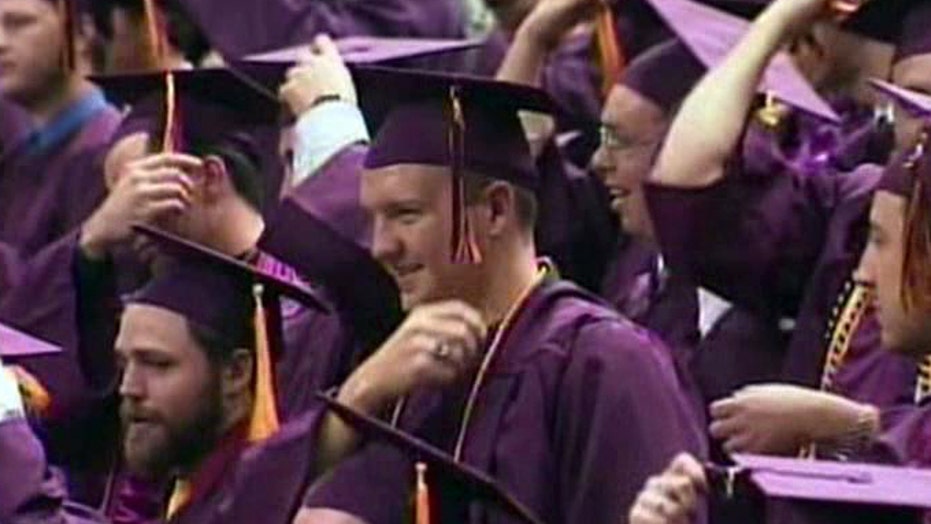 Is your degree paying off?

Report: Nearly half of all workers with four-year college degree have job which doesn't require degree

STEVE FORBES: Absolutely, it's done 2 things; one, it's done a catapult of college into an albatross because of tuitions are going 4 times the rate of inflation because of government subsidies. It's also making kids indentured servants where they come out of college with a mortgage- like loan. Instead of having a bright future it will take years to pay off those loans. It's a horrible situation.

RICK UNGAR: There's a lot of things to be concerned about how kids are coming out of college and not getting jobs. I find the question profoundly troubling because it only leads to one answer and that is to say that if you don't have money in this country, then you shouldn't be able to go to college. How are you going to go to college if you don't have money? That's what subsidies do. They make money available for deserving kids to go to school.

ELIZABETH MACDONALD: Same questions that human resources are asking across the country, do we want somebody that has more experience in the workplace or do we want a blue chip pennant that is overpriced? This is a circular problem. I hear what Steve is saying, government subsidies means college and universities hire more administrative staff. There is more administrative bloat. Administrators outpace the number of faculty by 10 times. When you have that bloat, you have to say to yourself who pays for that bloat? It's college tuition. It's the middle class family in America.

MIKE OZANIAN: These subsidies are bad, they raise the cost of tuition. They'll hurt the economy in the future because to pay for these subsidies tax increases are coming and there could be more debt issues to pay for these costs. But that's not why these kids cannot get jobs today. It's because the economy is terrible. The economy actually shrank in the fourth quarter of 2012. If this economy was growing the normal 4-5 percent that it does during a typical recovery many of these graduates would have jobs.

RICH KARLGAARD: It's unfortunate and we have reached this point where technology has changed the whole game in a way we are just beginning to realize. These online universities, some started by 2 Stanford professors, they offer world class education for free, or near free. What are employers looking for? They are looking for intelligence, drive and discipline and it used to be that a college degree stood for those things. Now employers have fast and better ways to determine whether they want to hire someone.

JOHN TAMNY: They're worthless and I'm not going to defend them and what bothers me is this notion of a job that requires a college degree. What a laugh! I don't care if you want to be investment banking analyst out of college or a Starbucks barista there is nothing you will learn in those 4 years that has anything to do with job you'll eventually do. Hence the idea that college would make us better or worse, it's a credential device. Jobs aren't plentiful right now because the government is getting in the way of economic growth.

RICH KARLGAARD: It's tough medicine for sure I feel sorry for the appointees who base their lives around the salaries they are now getting but the key word is unconstitutional, that's what the lower court said. The Supreme Court will probably look at this and if they reverse the lower court's ruling then reinstall people and their salaries. We have to draw a line in the sand about this unconstitutionality.

RICK UNGAR: Let me tell you something else about unconstitutional. Let me tell you what's likely to be unconstitutional, the legislation that these senators are suggesting because it's likely to be a bill of attainder, you can't target 3 people. A bill of attainder means Congress cannot target individuals to tax, take away their salary, whatever. These guys have it going on right now, the republicans are on the right side of this, and they are doing everything possible to screw it up. If they really want to do something here, they should ask people to post a bond. That's how litigation works.

STEVE FORBES: Posting a bond, you might as well take away their salary. In terms of a bill of attainder this is about collecting salaries unconstitutionally; don't collect it no more. What's even worse, in collecting their salaries, they are still allowed to make rules; they are acting like Hugo Chavez in Venezuela. The rulings of the past year should be null and void.

MORGAN BRENNAN: I'm not for or against this decision, but I think it's very premature to bring this forward for docking people's pay because this ruling is being appealed right now. To be fair, flies in the face of earlier precedents established by other courts. I think this is very premature. I think as long as President Obama, who is essentially is the Labor Boards boss, as long as they are working, they should be getting paid for that work.

JOHN TAMNY: They do and that's a separation of power, but I agree cut their pay. What we are missing the bigger problem here in that the federal government does weigh too much. There would be no incentive for President Obama to recess appoints someone and there would be no incentive for publicans to block him if we did not have the federal government involving itself in what should be a private matter between employer and employee. Definitely cut their pay but let's get rid of this.

ELIZABETH MACDONALD: I think their pay should be cut. This is the NLRB its part of the government; by the way the federal workers are unionized, my God. Steve has it right the republicans are angry that the NLRB is being treated as if they are voting members, when they are not. The recess appointments were unconstitutional; by the way this isn't Washington DC, District of Caracas. If its unconstitutional, they don't get paid.

MORGAN BRENNAN: I actually think this is great for business. Whether it ultimately works or not, this represents innovation in the workplace. I think this is good for the equality of pay as far as genders is concerned. That has been a big issue as we have seen. I also think already have elements of this in the workplace. Government workers have to disclose their salaries. We also see this with publicly traded companies; executives of publicly traded companies disclose their compensation. I don't think this is a new idea, I think it's actually pretty innovated.

MIKE OZANIAN: I hate collectivism, if you want to know what your worth is, talk directly to your boss, or talk to a competitor. That's the best way to find out what you're really worth.

RICH KARLGAARD: I don't think you would call the San Francisco 49ers or Baltimore Ravens collectivists or Whole Foods which is a great capitalistic organization. They make salaries very transparent. I agree with Morgan, some companies should try it, I personally wouldn't like to work for a company that. Experimentation is what capitalism is all about.

RICK UNGAR: I won't be against it if you tell us all your salary right now. I think disclosing your salaries and bonuses is a stupid, terrible idea. It's nobody's business.