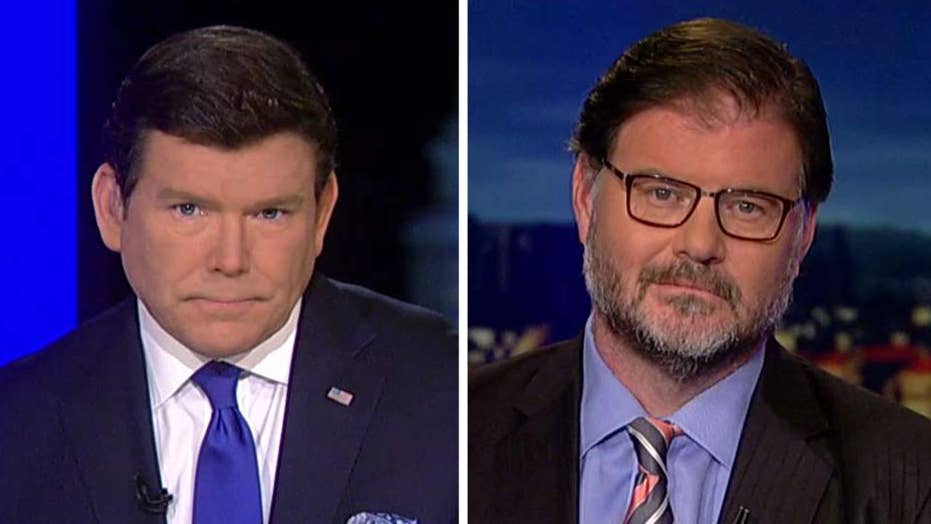 Is there political bias on the Mueller team?

This is a rush transcript from "Special Report with Bret Baier," December 13, 2017. This copy may not be in its final form and may be updated.

REP. BOB GOODLATTE, R-VA.: These text messages prove what we all suspected. High-ranking FBI officials involved in the Clinton investigation were personally invested in the outcome of the election and clearly let their strong political opinions cloud their professional judgment.

REP. JERROLD NADLER, D-N.Y.: He instructed to not say anything about Donald Trump that the majority of Americans weren't also thinking at the same time.

DEPUTY ATTORNEY GENERAL ROD ROSENSTEIN: The decision to remove Mr. Strzok off that case was made by Director Mueller based upon the circumstances known to him. It's important to understand, though, those text messages were uncovered in the course of the inspector general investigation which is not complete.

BRET BAIER, ANCHOR: But it is being completed soon as you see the deputy attorney general up there on the Hill, a fiery hearing today. Those text messages in question deal with FBI agent Peter Strzok, and he was sending these texts to FBI lawyer Lisa Page with whom he was romantically involved. Here is one of them from March. Lisa Page, "God, Trump is a loathsome human." Strzok says "Yes, yet he may win. Good for Hillary it is. Would be worse president then Cruz?" "Trump? Yes, I think so." "I'm not sure. OMG he's an idiot. He's awful. America will get what the voting public deserves. That's what I'm afraid of. God, Hillary should win 100 million to zero. I know."

Then in August, and this one really took up a lot of time in the hearing, "I want to believe the path you threw out for consideration in Andy's office, that there's no way he gets elected. But I'm afraid we can't take that risk. It's like an insurance policy in the unlikely even you die before your 40."

What is the policy and what are they talking about? Let's bring our panel: Jonah Goldberg, senior editor of National Review; A.B. Stoddard, associate editor at Real Clear Politics and host of "No Labels Radio" on Sirius XM, and Matt Schlapp, contributor with The Hill.

We just received this letter where they detail how all of this came out, and it is in regards to the inspector general's investigation that's ongoing, Jonah. But that second text really got a lot of attention.

JONAH GOLDBERG, NATIONAL REVIEW: The second text, the optics on all the texts is bad. The second text is the one that actually could point to actual behavior, to actually taking action. There is no crime for FBI agents or Department of Justice agents to have political opinion. I know some who have very strong political opinions on the other side of the partisan aisle. What matters is whether or not you put your biases or your opinions into action. And the optics on that look bad, and I think this is sort of a hot mess.

It's not helped by the fact that there are a lot of people who want to connect dots that cannot be connected yet, that there is no evidence of wrongdoing yet, and that there are actually two tracks that people want to muddy into one. One is how the Department of Justice and the FBI dealt with the Hillary Clinton investigation. And I do think that needs to be probed somehow, maybe not with a special consul but with an outside prosecutor. And then also how they dealt with Donald Trump. And right now we just don't have enough facts, but a lot of this I actually think is worrisome, and I've been a pretty big defender of Mueller so far.

BAIER: Here he is, Trey Gowdy, on these conflicts.

REP. TREY GOWDY, R-S.C.: What happens when people are supposed to cure the conflict of interests have even greater conflicts of interest than those they replace? You nor I nor anyone else would ever sit Peter Strzok on a jury. We wouldn't have him objectively, dispassionately investigate anything knowing what we know now. Why didn't we know it ahead of time?

BAIER: And other questioning Rosenstein answers. Take a listen.

REP. STEVE CHABOT, R-OHIO: How, with a straight face, can you say this group of Democrat partisans are unbiased and will give President Trump a fair shake?

ROD ROSENSTEIN, DEPUTY ATTORNEY GENERAL: We recognize we have employees with political opinions and it's our responsibility to make sure those opinions do not influence their actions. I believe Director Mueller understands that and he is running that office appropriately.

A.B. STODDARD, REAL CLEAR POLITICS: Mueller transferred Strzok for the reasons that we are talking about, and I agree with Jonah. I think it looks terrible. I think he behaved unprofessionally, perhaps unethically if it leads to some kind of measurable behavior.

There was some reporting at the end of last year before the election about how the FBI was Trump-land. There was so much anti-Hillary, pro Trump, especially in the New York wing of the FBI, that this is the reason that James Comey ruined his reputation by coming out and doing what he couldn't do and shouldn't do, commenting July 5th on Hillary Clinton then releasing it October 11th, both of which she believes were fatally injurious to her campaign. And so he did it because he was so afraid she would win that the pro Trump forces in the FBI would leak on him making it look like he covered for her. In the end Peter Strzok, no matter what he did in the Flynn interview, did not make up the case against Flynn.

BAIER: Sure, understood, and it is based on facts. But I guess when they are talking about Andy's office, about the path that they throw out for consideration and that they should do this as an insurance policy because "I'm afraid," he says "we can't take that risk" that Trump gets elected, what are they talking about? Don't we want to know what that path is? What are they talking about doing? We talk here about conspiracy theories and staying to the facts. This goes down that conspiracy theory lane.

MATT SCHLAPP, THE HILL: What we see is that prosecutors have wide discretion, I am going to disagree with A.B. just a little bit, where they can destroy people's lives not even on a conviction but on charges. In Washington, D.C., it's very easy to get an indictment against a Republican, really easy.

And what you see here is people who have a lot of power, FBI agents who have a lot of power, and it goes to this question of did Obama politicize the FBI in a way to try to harm the ultimate political opponent which was the Republican nominee taking on his hand chosen Democratic nominee. And I think there are real questions that need to be answered here.

This is beyond just smoke on the idea of James Comey and what Obama did during the election. Think about this along, Bret. General Flynn worked for President Obama. Obama fired him, and then eventually the Obama administration had a role in spying on General Flynn. That might have all been right and good, but this is also Nixonian and scary. And this email may be can defined, maybe there are antecedents to those pronouns that are fine. But I think we have to know, or the FBI really never walks out of this with the same reputation they walked into this with. And I think it's bad for the country.

BAIER: Now what I'm talking about, Bruce Ohr and his wife who works on the Trump dossier with Fusion GPS which is also talked about in this hearing.

GOLDBERG: That's right, and I agree with Matt. I think the problem, though, is that there are a lot of people who want to blur distinctions that are important. As a rule of law faith and confidence in the Justice Department, Strzok apparently reported that Flynn spoke -- that he thought Flynn spoke truthfully. And so when Flynn --

BAIER: Actually that is what Comey testified behind closed doors up on Capitol Hill.

GOLDBERG: Right. So Flynn, according to Strzok, didn't lie to the FBI. Flynn later, the decision to charge him, which he has pled guilty to, came from Mueller's office. So you have a lot of evidence coming out that is damning about how the FBI, the Justice Department dealt with Hillary Clinton, and there are people out there trying to say that proves the Mueller investigation is illegitimate as well. And I don't know that you can yet connect those.

SCHLAPP: The legitimacy of the Mueller investigation comes to down one central point -- was there inappropriate contact between team Trump and Vladimir Putin's government to rig the election? And so we are talking about all of this, and the basic legitimacy of Mueller is can that be proven not? What we're talking about, it's all types of other information that's coming out that has nothing to do with that but actually points to wrongdoing on behalf of the FBI.

GOLDBERG: Yes, but Mueller got his job because the president of the United States fired the FBI director.

SCHLAPP: I still say we can talk about the missteps. You can write a whole book about the missteps of the Trump administration in the first several months, but the fact is the American people are fair, and if the investigation doesn't find convincing evidence that there was this type of collusion, whatever that word means, between team Trump and the Russian government, really all of this is a waste of time.

STODDARD: What if they find something that leads them to believe there was something that Donald Trump wanted to cover up about his family's past financial transactions or his own that would make you look like he possibly was colluding and therefore he fired Comey and did other things to suggest the obstruction of justice?