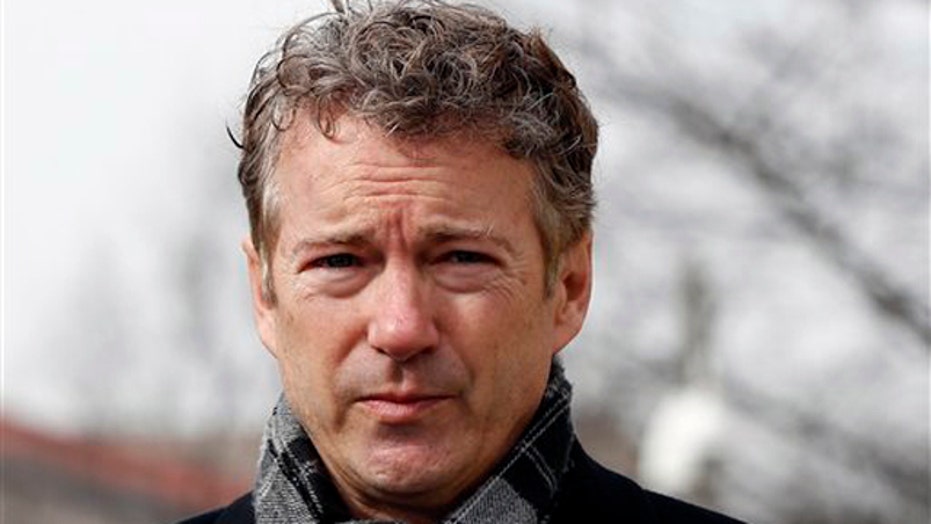 Is Rand Paul the Republican front-runner in 2016?

Karl Rove on why the lawmaker is a contender

This is a rush transcript from "Hannity," February 26, 2014. This copy may not be in its final form and may be updated.

SEAN HANNITY, HOST: An article today over at NationalJournal.com is declaring that Senator Rand Paul is the, quote, "early" presidential frontrunner for the Republicans in 2016. But while he may not be your average GOP establishment guy, could the conservative- leaning libertarian -- could he lead the party back to the White House?

Here with analysis, somebody who knows a thing or two about presidential candidates, races, Fox News contributor, "The Architect," Karl Rove. How are you?

HANNITY: I'd shake your hand, but I don't want to get you sick!

HANNITY: I'll try not to breathe in your direction.

HANNITY: Early for 2016, but interesting to a lot of people.

HANNITY: What do you -- what names come to mind when you think...

ROVE: Well, look, there are 16 of them. Let's stay focused on this one that we were talking about tonight. I thought -- first of all, nobody wants to be named the early front-runner because that happened to Chris Christie, and they came after him. And so I hope -- I hope -- Senator Paul strikes me as a very sharp guy who does not want to be seen as the front-runner.

HANNITY: You supported him for the Senate, right?

ROVE: Oh, yes, yes. We spent -- we spent, like, $3 million or $4 million from American Crossroads to help him.

ROVE: To me, it's very interesting. He's a contender. Too early to start sort of -- in my opinion, having front-runners. But he's a contender. And he is less libertarian than his father. And he is really a pragmatic politician when it comes to the tactical part of politics.

For example, one of the things I think is most attractive about him is he says the Republican Party and conservatives need to recognize that our principles are for everybody, everywhere, at all times. So he says why doesn't the Republican Party make its case in the Latino community, the African-American community, among young people? I mean, he famously says he wants a party of people with tattoos, referring to young people.

HANNITY: He spoke at a historically black college. He -- he's...

ROVE: He is fearless about it, and he's sincere about it. And he's trying to encourage others to join him. And I think it's one of the most appealing parts of his personality and his political approach. He believes that we ought to, as conservatives, have confidence that our principles apply to more than just people who say, I'm a conservative.

HANNITY: Why is Ted Cruz, who we just had on -- why is Ted Cruz being attacked as often as he is by fellow Republicans?

ROVE: Well, because he's attacking them. I mean, he raised money for the Senate Conservative Fund to go after Republicans in primaries, vowed he wouldn't do that and that he'd stay out of primaries, and then it turns out he's -- it's now been revealed he signed a fundraising letter for another group that's involved in campaigns against other Republicans. So...

HANNITY: But that's not... people were mad at him before that.

HANNITY: This is deeper than that, isn't it?

ROVE: Well, and yes, because, look, he had an idea. And rather than taking that idea to his colleagues in the caucus and saying, Look, here's what I want to do. I want to de-fund ObamaCare, here's my strategy. Instead, he played an outside game. And they heard about this from people back home saying, You need to join with Ted Cruz.

And they're sitting there, saying what's Ted Cruz's strategy? He doesn't even tell us -- when we have lunch with him on Tuesday, as all the Republican senators do, he doesn't bother telling us what his idea is. And when we now ask him what his ideas -- several of them said it to me. What does he want us to do? What's the end game? And -- and -- and...

ROVE: That got them upset.

HANNITY: So that was during the CR. That's when he went with the filibuster. But remember, at the time, the very senators that said it was a bad strategy (INAUDIBLE) the time to fight is for the debt ceiling. And the debt ceiling comes...

HANNITY: ... and the Republicans put up no fight, and then they got mad at him because he was -- he demanded a vote on the Senate floor.

ROVE: And look, here's what happened, I think. And I haven't been in Washington here in the last couple of weeks, so I missed this -- the up front and personal conversations with senators about this.

But remember what happened during the battle last fall. The Republican numbers went into the tank and the Democrat numbers rose dramatically. And we had the biggest gap to the advantage of the Democrats that we've had since, I think, 2006 in the polls.

And so what I think what it did is it caused Republicans to say, Do we want to go through that again, when it looks like we're trying to shut down the government? They pulled it off in 2011, when they were able to push Obama into a position of weakness. Obama looked at the idea of the Republicans saying, We're going to shut down the government unless you give us some concessions on the debt ceiling and said, Bring it on.

ROVE: I saw what happened to you last fall. Let's bring do it again.

HANNITY: Let's talk about the Senate. How many seats realistically do you think Republicans have a good chance of picking up?

ROVE: Well, as of today, I think there are 10. The tenth one joined today. We have the seven Democratic seats that are in red states -- North Carolina, West Virginia, South Dakota, Montana, Alaska, Arkansas and Louisiana. In four of those, the incumbent's running for reelection, three that the incumbent has pulled the ripcord.

We also have in addition to that in Michigan, a purple state. We also have if Scott Brown gets into it in New Hampshire, a real race. And today, the news is breaking in Colorado that Representative Corey Gardner (ph), a bright young rising star in the House, had decided that he's going to take on Udall in the Senate race. He can win that race. He's a terrific young guy, comes from northeastern Colorado, a young, thoughtful, strong conservative.

So if we've got seven red states and we now start -- have -- we've now got at least three and could have as many as five blue states, we've got a real shot at picking up the sixth...

HANNITY: All right, what about Kathleen Sebelius? Now she's saying 7 million is -- Oh, those were the CBO numbers in terms of a goal of sign-up for ObamaCare.

ROVE: We've been hearing for a year-and-a-half that -- from the administration that we're going to have all these sign-ups. They had every chance to say what their number was, if it was different than the CBO, and they didn't. And it's baloney. I mean, this is another embarrassment. They ought to fire this woman. I mean, I know they don't want to because they don't want a contentious hearing on...

ROVE: But look, this isn't the only lie that they're talking about. Let's go to the whiteboard. On January 10th, the president tweeted out saying, from his personal account, We're doing great because we have six million people who now have health coverage because of ObamaCare, because of the health care reform.

ROVE: But the other 3.9 million were from people who signed up for Medicaid. The only problem is this, 55 percent of that 3.9 come from states that did not expand Medicaid. That is to say, they were already eligible under the existing law. They weren't eligible because of the Affordable Care Act, ObamaCare. 45 percent were in states that expanded Medicaid. So our -- the majority of the Medicaid people came from states that the Affordable Care Act didn't -- didn't...

HANNITY: So the number is much lower than they're saying.

ROVE: Much lower. Now, it's even worse than that. Reading this -- this is the official document from the Centers for Medicaid and Medicare Services at HHS. I'm reading this document. This is all the sign-ups. And here's the big chart showing all the people who are signed from the states with Medicaid, White House expanded Medicaid because of the -- of ObamaCare.

And then I'm reading the footnotes and come to find out in six of the 25 states and the District of Columbia that expanded Medicaid -- in the footnotes, they acknowledge that the number that they had includes the renewals, the people who were already on it renewing it again!

HANNITY: Karl Rove, very informative, as always. Thanks for being with us.

ROVE: You bet. Thank you.