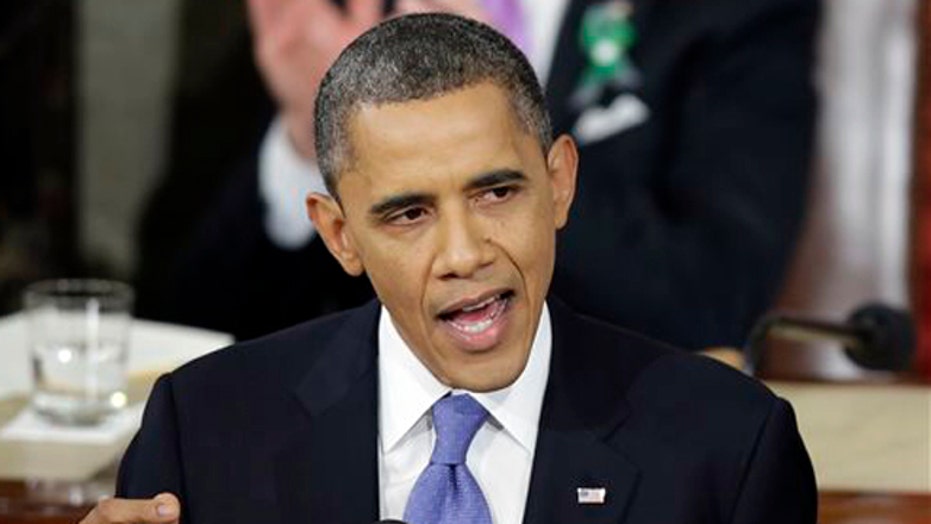 This is a rush transcript from "The Kelly File," January 27, 2014. This copy may not be in its final form and may be updated.

MEGYN KELLY, HOST: So if Congress will not approve something and Americans have lost confidence in the president's decisions, exactly who is he acting for when he acts on his own and is he crossing a legal line here? Let's start with Judge Andrew Napolitano, Fox News senior judicial analyst and judge. Who does he act for?

KELLY: And the White House has been saying all along he may do that --

NAPOLITANO: The federal government is the biggest spender in the land, so that will have a profound effect on the people that he believes supported him. Many of whom no longer do.

KELLY: OK, let me ask you this, they say that this has been the consistent practice of all modern presidents, President Obama, President George W. Bush are about tied when it comes to the number of executive orders -- first five years in office, Bush, 165, Obama, 167 that they issued.

NAPOLITANO: Well you know, there are executive orders -- the executive order was intended to allow the president of the United States to get his arms around and control the machinery of the executive branch, of which he was the head, the military, the Justice Department, certain agencies that he can control.

KELLY: To carry out his ability that the laws be faithfully executed.

NAPOLITANO: That is the key, Megyn, and the line you just quoted is from his oath of office, which is in the Constitution, faithfully executed. That means he has to enforce the laws as they were written, as they were intended, whether he agrees with them or not.

Here is where he can go over the line, as you asked. If he so changes the law by enforcing part and not enforcing part. That the meaning and the purpose and intent of the law is different from what Congress enacted, then he is using his executive --

KELLY: What, specifically, is he doing that on, is he expected to do it on or has he done it on?

NAPOLITANO: He has been doing it on immigration. He basically re-wrote the immigration law by saying if you're here illegally, I'll tell you what hoops you can jump through, and I wouldn't deport you. Guess what? He made up the hoops, Congress didn't enact the hoops, he made up the hoops. The Environmental Protection Administration asked Congress to enact legislation which it refused to enact. He went ahead and had the Environmental Protection Administration enact that legislation as an administrative rule.

KELLY: And the Supreme Court said he would have a lot of latitude when it came to regulating --

NAPOLITANO: Look, impeachment would be the nuclear reaction so to speak. But they could defund almost anything the president wants.

KELLY: If they get both bodies on board and then get him to sign it.

NAPOLITANO: He can veto the defunding and then they have to override the veto. So it is not an easy thing for them to do.

KELLY: Clearly, because they tried many times in the House on ObamaCare and failed. Judge, good to see you.

KELLY: Also with us now on this issue, Robert Zimmerman, a Democratic consultant, a member of New York State's Democratic National Committee and co-founder of Zimmerman/Edels On Public Relations. Robert, good to see you.

ROBERT ZIMMERMAN, DEMOCRATIC CONSULTANT: Good to be with you.

KELLY: Let me start with this quote from candidate Obama back before he became president and what kind of president he would be.

THEN-SENATOR BARACK OBAMA: But this is part of the whole theory of George Bush, that he can make laws as he is going along. I disagree with that. I taught the Constitution for 10 years. I believe in the constitution. And I will obey the constitution of the United States.

KELLY: And promise that he would not do an end around Congress. Is that what he is planning on announcing tomorrow?

ZIMMERMAN: No, of course not. Let's be very clear. And Judge Napolitano very fairly pointed out that what the president is doing and what his predecessors have done, is certainly protected under the law. In fact if he oversteps, we have not only the Congress that can take action, but also the court system that can take action as well.

In fact, what the president is stepping up and actually doing is getting action and producing results, because that's what is at stake here for the country. This is not a legal seminar we're in, we're about governing.

KELLY: Right, taking action is good, but not necessarily good when you have to do it without the Congress. There is a reason we elect those people. We send them to Capitol Hill to go be our elected representatives. There is a reason the Constitution says the president has to work with them.

ZIMMERMAN: And in fact, Megyn, the president will work with them, but when you have a situation where the Republicans and Democrats in the Senate are working well together, they produce legislation focusing on the highway, focusing on the highway bill, the immigration bill, the legislation to end discrimination against the gay and lesbian community. And then you go to the House of Representatives with the Tea Party caucus --

KELLY: But those are our elected representatives. You may not like what they are doing, but they are there for a reason.

ZIMMERMAN: That is right, but when the House is busy holding hearings about extra-terrestrial forces or voting 50 times to try to repeal ObamaCare, they're not dealing with jobs bill and they are not dealing with immigration. Then it is important for the president to take his case to the American people and where he can legally can step up on issues like climate change and discrimination.

KELLY: Where he legally can, that's the key. Because the question was, was the system set up to be this adversarial and sort of lead to gridlock, and many constitutional scholars say yes.

Let me ask you about this. Jonathan Turley who is a very left leaning lawyer, keeps a very interesting blog, jonathanturley.org. And he says, "In my view Obama has surpassed George W. Bush in the level of circumvention of Congress and the assertion of excessive presidential power. I don't think it is even a close question," he says.

So in fact, he is governing. He is getting results and for the Republicans to truly be a part of government,t they have to come together and not let one small caucus ultimately destroy their effectiveness.

KELLY: It is not one small caucus when you have 63 percent of the public who don't have confidence in the president's decision-making.

ZIMMERMAN: And 80 percent of the public doesn't trust the Republican Congress in making any decisions.

KELLY: Right, so they don't want any decisions. I think they like the gridlock. I got to go.

ZIMMERMAN: OK, good to be with you.

KELLY: Good to see you. Hope we see you again.