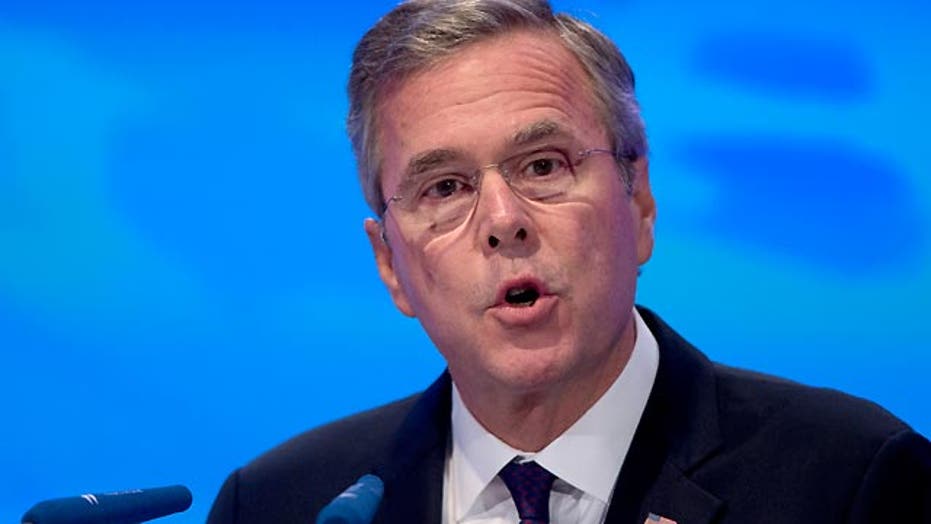 This is a rush transcript from "Special Report," June 9, 2015. This copy may not be in its final form and may be updated.

FORMER GOV. JEB BUSH, R-FLA.: Mr. Putin is a ruthless pragmatist. He will push until someone pushes back, and I believe that's NATO. NATO's responsibility is to do just that.

By being clear what the consequences of bad behavior is in advance I think we will deter the kind of aggression that we fear from Russia. But always reacting and giving the sense that we're reacting in a tepid fashion only enables the bad behavior of Putin. So I think there's lots to do, and we're beginning to realize that the reset button didn't turn out so hot.

BRET BAIER, ANCHOR: Jeb Bush in Germany focusing on foreign policy six days before he is expected to launch his presidential campaign. We're back with the panel. We'll start there. George?

GEORGE WILL, SYNDICATED COLUMNIST: Well, you go overseas for a kind of gravitas infusion, if you've been a governor and haven't been dealing, as some senators do, with foreign policy, and that's fine. And Jeb Bush has the advantage here of saying I'm not just George W. Bush's brother. I'm George Herbert Walker Bush's son who is enjoying a kind of renaissance in his reputation in part because as measured in successful foreign policy contrasts interestingly with that of his son, which was neither.

And he has also I think right to stress Putin. We've focused quite enough on ISIS. Putin to me, a nuclear armed power dismantling a nation in the center of Europe is a bigger threat to this country in the long term than ISIS. And it's something we actually know how to deal with, containment, NATO, and all the rest.

BAIER: Juan, what about politics at the water's edge with the specific charges against the administration, against President Obama, against Secretary Clinton overseas?

JUAN WILLIAMS, THE HILL: Well, the politics are pretty clear here. Republicans, the Republican electorate does not feel safe, and they are highly concerned about national security at this moment. They rank it as their number one issue, Bret. So you have all of the candidates, I think, in a very difficult situation, because none of them have extensive foreign policy experience. Ad if you compare them directly with Hillary Clinton as a former secretary of state, they come up lacking. So what you have seen --

BAIER: Although they would charge that her record is not exemplary.

WILLIAMS: Right. That's the thing. None of them has been in the position to deal with other foreign powers, traveled extensively and all that. So what you have seen is then a lot of them going overseas. I had had the Fox News Brainroom come up with the answer that six of them already have gone overseas, Walker, Christie, Huckabee, Carson, Jeb Bush, and Lindsey Graham. Four of them have gone to Israel. That seems to be the place to go. But in all cases, it's less about their actual policy.
If you remember Walker had a few trips over in London. It is more about saying, listen, can I get on the world stage and can I handle it ably. And I think that's what we saw today from President Bush.

BAIER: On Putin President Obama just yesterday said that he has a decision to make. He's either going to wreck his country's economy and continue isolation, or does he recognize that Russia's greatness does not depend on violating the territorial integrity and sovereignty of other countries?

CHARLES KRAUTHAMMER, SYNDICATED: I think Putin will choose the latter. Obama's arrogance on this is really incomprehensible. He tells ISIS it's not Islamic. He tells Israelis that he knows Jewish interests and ethics more than they do. And now he is instructing Putin on what the essence of Russia's greatness is. Putin has 80 percent approval in his country, almost twice what Obama here. He knows what Russians want. They want the Crimea and Ukraine. They are willing to suffer economically if necessary. I don't think that's a productive line of argument.

BAIER: So Bush focusing on Putin is?

KRAUTHAMMER: Yes because it is a problem that we have experience with and that it requires very little improvement to make a difference. We have done nothing against Putin, and there are a lot of options on the table that we have ignored.