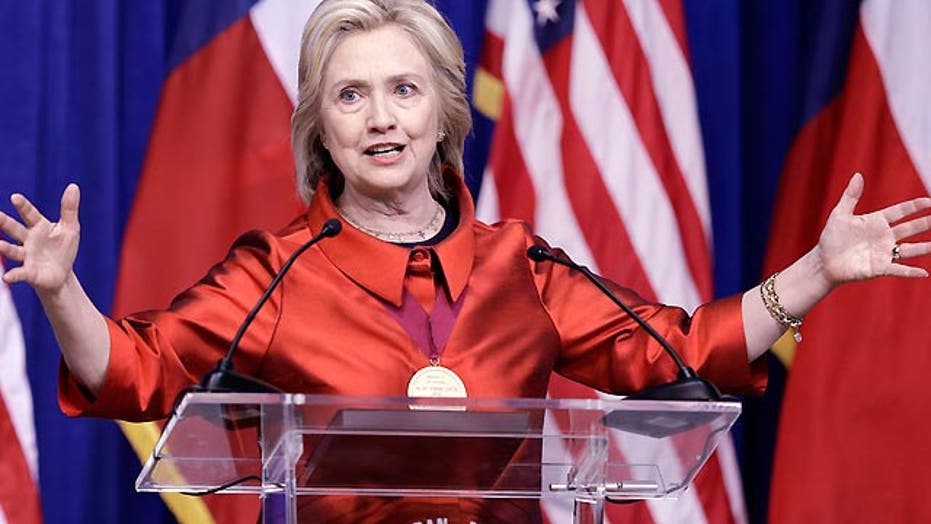 HILLARY CLINTON, FORMER U.S. SECRETARY OF STATE: Today Republicans are systematically and deliberately trying to stop millions of American citizens from voting. What part of democracy are they afraid of?

GOV. JOHN KASICH, R-OHIO: We have 28 days of voting in Ohio. Her home state of New York has one day. So maybe the first thing she ought to do is work on her own state.

Look, I don't say anything about her emails or all this other stuff, but when you start saying that you are going to sue Ohio and that Republicans are deliberately working to deny people the right to vote, I'm outraged by it. And frankly, one should mine their own store before they get up trashing other people who are doing far better than what they have done.

BRET BAIER, ANCHOR: Ohio Governor John Kasich, one of the Republicans responding to Hillary Clinton and her charge that Republicans are trying to prevent people from voting across the country. We're back with our panel. A bit of lightning round here first on this voting rights issue. Julie?

JULIE PACE, ASSOCIATED PRESS: Well, there is some pretty clear politics happening on two fronts here. One, Democrats like to wield voting rights as an issue because they think that it puts Republicans in a position of having to defend actions that would stop people from voting. That's an awkward position to be in for anyone. And, two, this is an issue that is popular with a lot of people who voted for Barack Obama, African-Americans in particular, and that's a block she will need big support from if she is going to win in general election.

NINA EASTON, FORTUNE MAGAZINE: That's exactly right. He's pulling a page right out of the Obama playbook trying to gin up the base.

EASTON: She is, I'm sorry, with these totally specious arguments. I mean, voter I.D. laws to combat fraud are fine. There is nothing wrong with them. They are not discriminatory. And this idea that to extend the voting before Election Day, there is pros and cons to that. To say that Republicans are trying to tamp down the vote is ridiculous, but, unfortunately, it works.

CHARLES KRAUTHAMMER, SYNDICATED COLUMNIST: Yes. I think it helps her in a lot of ways politically and cynically because it distracts attention from all the scandals swarming around her. But I kind of like Kasich's outrage, because that -- you know, and it's his sort of essentially him. That is not a manufactured outrage which is sort of so common in Washington. He was outraged. He believes in equal rights, and he doesn't like being accused of not supporting that. I think that was a real good moment for him.

BAIER: OK, it's Friday, so you know where we head -- to the Candidate Casino. And there are a lot of declared candidates now, 10 of them, and many other perspective candidates in coming days. So, let's talk about the Republican field that's expanding. Julie?

PACE: You know I love the casino, so I have been toggling back and forth at the top between Rubio and Walker. I've got Rubio at 40 and Walker at 30 for this week. Jeb at 25, not a lot of enthusiasm and momentum, but he has a launch coming up, a formal launch, so we will see if he can gain there. And I'm saving five for Cruz simply because I think he is going to raise a lot of grassroots money and that can equal a lot of enthusiasm.

EASTON: I lowered my bet on Jeb Bush. I think the traction is not following the dollars. Marco Rubio I think is gaining traction, and I'm upping my bet on him. Scott Walker interestingly took on another target beyond unions, and that is the tenure of university professors. I think that's a brilliant move politically and will really help him with the base. I gave him more than I have in the past.

KRAUTHAMMER: I'm going to pass on that last one.

KRAUTHAMMER: I got my top three, as always. Rubio on top, Walker, Bush, trailing, and now I have a sort of new thing, because you complain about the way I broke the rules last week. So I am looking at the people outside the top tier who have the best chance of jumping in to the top tier, although I don't expect any of them to win the nomination. And my trio are Cruz, Fiorina, and Kasich, who I think are the most likely of the pack to make an impression and join the top.

BAIER: OK. And you can always weigh in online, Twitter, Facebook, on the homepage. All right, quickly, winners and losers?

KRAUTHAMMER: China, winner, a massive cyber-attack on the United States, no response. And then my loser, Hillary Clinton for the aforementioned race baiting statement she made. I think it's made rather cynically. It's cheap demagoguery. Yes, all candidates do that and Republicans in the past have played the race card, but it's a particularly sensitive issue and I think it should be called out any time it's done.

EASTON: My winner sadly is Edward Snowden who was able to take advantage of this NSA debate to pose himself as a hero with a "New York Times" op-ed. My loser is Lincoln Chafee who jumped into the race for Democratic presidential stakes this week, on reinstituting or instituting the metric system and, worse, comparing us to Burma and Libya.

PACE: For my winner, I'm taking a page out of the Charles Krauthammer playbook and going with the White House hawk who already had a shout out earlier in the show, big star at the White House this week. And my loser is Mitch McConnell, typically seen as a master dealmaker on Capitol Hill but really surprised a lot of people with his handling of the NSA debate.

BAIER: That is it for the panel. But stay tuned to hear one contender's plan for America.