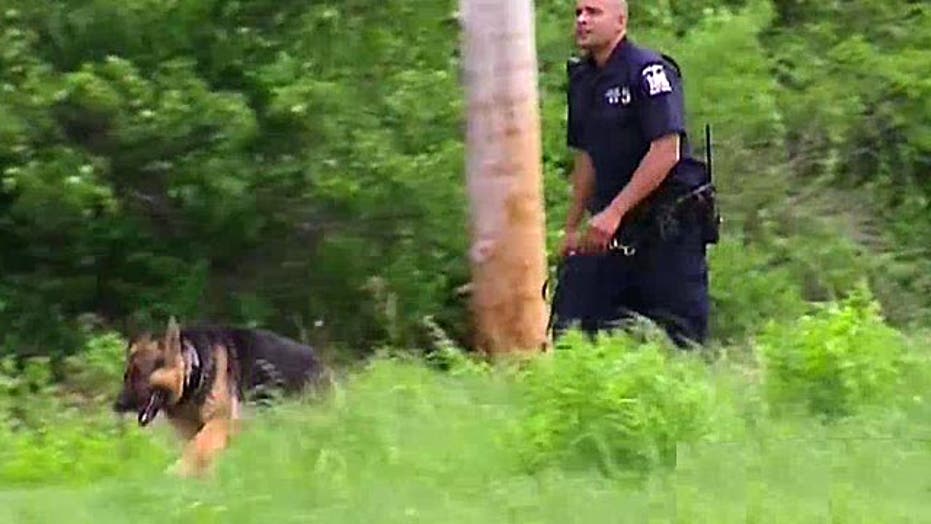 Inside the forensics of the manhunt for escaped killers

'Possible' scent may have K-9 investigators hot on the trail of killer prisoners. Where can dogs pick up the trail and what clues could police find?

This is a rush transcript from "On the Record," June 11, 2015. This copy may not be in its final form and may be updated.

GRETA VAN SUSTEREN, FOX NEWS HOST: The police K-9 unit only might be on the trail of these two killers. Right now, the dogs picking up a possible scent. Is it enough to lead investigators to the dangerous fugitives?

VAN SUSTEREN: You have worked with dogs that have tracked scents. What's your thought on this?

BADEN: I worked with the New York State police dogs. Those dogs are very good. But they hit on many things. And hopefully they are on the track. But the raining that has happened in between the escape and today up there also interferes with the ability of the dogs to focus on the scent. And, as you said, they can be scenting a dead raccoon. They can be scenting other dog's urines and alerting at that point. And hopefully, they -- the police have it narrowed down to the area. But agreeing with what you said, they could be in Canada or Mexico for all we know.

VAN SUSTEREN: You know, I guess the only way they end up in those places, because we have heard no information that there has been a carjacking or there has been stolen vehicle in the area, is they have had to have had some help. We suspect they had help getting out.

VAN SUSTEREN: A lot of suspicion on this one woman who, the day they, quote, got out, she checked herself into the hospital for nerves or something. But that doesn't mean there isn't somebody else. These are clever, evil men. One has successfully escaped once before.

BADEN: Right. He is familiar with what happens after you get out from his past experience and then you have got to know where to go. You brought up a good point just now about the railroad track. Remember, they had a five-hour lead before anybody knew they were missing, which is really a problem as to why that happened in the correction facility. And was there a train that left within those five hours that they could have been on before anybody was looking.

VAN SUSTEREN: It's interesting what Governor Cuomo said. It might have been more than five hours. That they might have left the prison facility, you know, late Friday night I think he said.

BADEN: Well, that would be interesting. I'm not sure what Governor Cuomo said. There is an issue here, too. This isn't the first time that people have escaped from Dannemora. It has been repeated. In the early 1900s, four prisoners from the Dannemora did the same thing. They dug for four years under the wall, got into the sewer system and got out of a manhole, a different manhole, and escaped. They were found pretty quickly but, and this happened a few times, so that Dannemora has been breached. And it's interesting to know what they are doing about the security in Dannemora. Something was wrong there. This just isn't an act of God. This is somebody who didn't do their job.