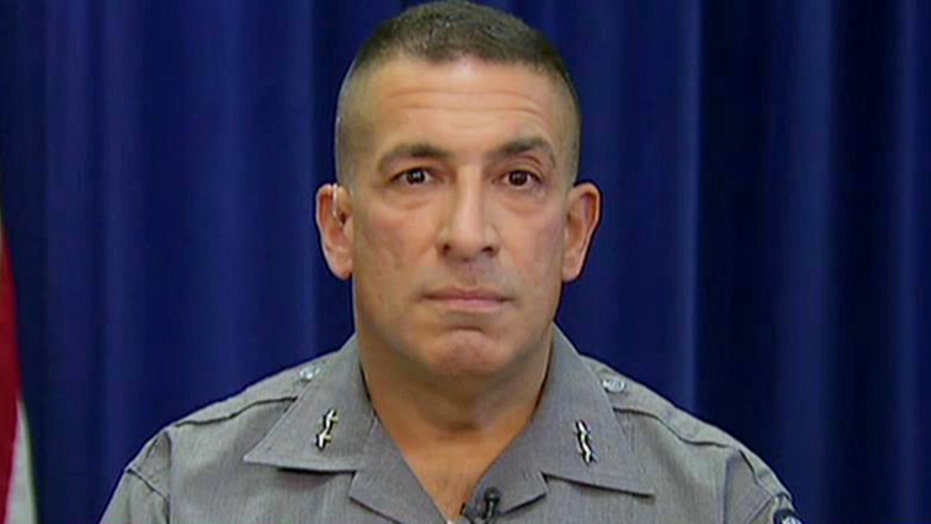 How did Sgt. Jay Cook and law enforcement officials take Sweat down after a marathon manhunt?

This is a rush transcript from "On the Record," June 29, 2015. This copy may not be in its final form and may be updated.

VAN SUSTEREN: Superintendent, thank you very much for joining us.

VAN SUSTEREN: And a big thank you to you and every other law enforcement officer out there for the last, you know, 20-some days. Thank you very much.

D'AMICO: Thank you. Our law enforcement folks really did a fantastic job over the last three weeks.

VAN SUSTEREN: You know I was so worried though. I mean, because, you know, going out in that field with those two guys who had nothing to lose, hiding in that deep underbrush. We knew they had a shotgun. Every single night I lived in fear that he would be hiding behind some tree and shoot some law enforcement. This has been tough to watch.

D'AMICO: It has been. And I will tell you, you know, between the two of them they have three bodies that we know about that they were serving time for. So it was also our concern that an innocent civilian or a law enforcement officer might come upon them and be injured or killed.

VAN SUSTEREN: Yeah, especially since they had nothing to lose at that point. They were going to go back to prison and finish their sentence and get a new one when they escaped. Tell me what happened. What happened with Sweat?

D'AMICO: What happened with Sweat's capture, so Sergeant Cook was on patrol, and he was supervising perimeter posts in the area. We were doing a ground search from the Canadian border, moving south, trying to find him in a fixed area. And he came upon him and he was kind of jogging along the edge of the roadway. And the sergeant pulled up to him in his truck and, you know, pulled him over, and Sweat turned, he looked at him, turned away from him, he called him over again. Sweat kind of raised his hands as if to say, you know why me or it's not me. And at that time the sergeant recognized him and Sweat turned, dropped his knapsack and began to run.

The sergeant pursued him through the field. And at some point, the sergeant realized that there was a tree line ahead and if Sweat had made it to the tree line, he probably would have found freedom, because the woods up there are so dense you can only see feet in front of you. And he made a decision to use his service weapon and he shot Sweat twice in his torso, and was able to apprehend Sweat.

VAN SUSTEREN: You know, it's so risky in light of what has been going on in the nation. I have got to hand it to the sergeant, you know, that I might have, you know, with all the apprehension about the shootings, you know, I bet this was, when he pulled that trigger, you know, he had to hope this was the guy.

D'AMICO: Yeah, I mean, I think the sergeant properly identified him. You know at the second time he turned around he recognized him. You have seen the pictures that have been posted by the media, he looked a lot like the photo that we have been circulating. And at that point, he dropped the backpack and ran. I think he probably reinforced to the sergeant that he was David Sweat. And I think the sergeant did an excellent job honestly out there by himself taking action and making the right decision.

VAN SUSTEREN: Well, obviously unbelievable. We all tip our hats to him and everybody else involved. One quick question, what was in that knapsack? Did he have food? What did he have in there?

D'AMICO: He was kind of a survivalist. I think he studied it while he was doing time. And in the knapsack he had basically everything he needed to survive. He had water. He had canned foods. He had had candy and snacks, including things like pop tarts. He had wipes and bug spray and a compass, a transistor radio with spare batteries. He was fairly well equipped.

VAN SUSTEREN: Superintendent, again, thank you very much. And, you know, great job.