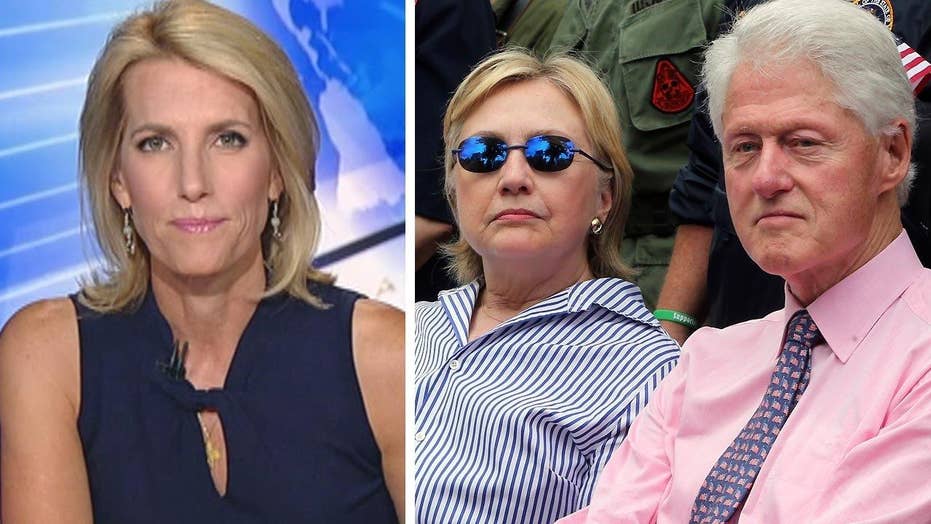 Radio host and LifeZette.com founder Laura Ingraham goes 'On the Record' the new questions raised and revelations from the newly-surfaced emails about State Dept. and Clinton Foundation

This is a rush transcript from "On the Record," August 24, 2016. This copy may not be in its final form and may be updated.

MARTHA MACCALLUM, 'ON THE RECORD' GUEST HOST: Just a little while ago, President Bill Clinton defended the Clinton Foundation when he was asked about all of this at a campaign stop in Atlanta.

Here is what he said.

BILL CLINTON, FORMER PRESIDENT OF THE UNITED STATES: I made it clear that if she becomes President, we'll have to do more than we did when she was Secretary of State because if you make a mistake, there's always an appeal to the White House, if you're Secretary of State. If you're President, you can't.

But we're going to transition all these responsibilities that would require foreign or corporate donations, which I will accept. And I won't raise money for the foundation if she wins. And I'm happy to do the transition as quickly as we can.

Laura, good to have you with us tonight.

MACCALLUM: I thought those comments were quite interesting tonight by Bill Clinton. And I'm curious what you think about them.

INGRAHAM: A little flip, don't you think? Like, oh well, we are happy to, you know, consider moving responsibilities. And I guess Chelsea would be in charge of the foundation if Hillary becomes president. But it's all kind of beside the point now, isn't it?

I mean, they knew she was going to run for president. The foundation was set up to, you know, I'm sure did some good things, but what we know from just the emails that have been released, Martha, is that you had to pay the Clinton Foundation to meet with Hillary Clinton.

Hillary Clinton wasn't worried about yoga schedules or her mother's funeral arrangements not becoming public. Hillary Clinton was clearly shielding what was ultimately influence peddling done through the donations of the Clinton Foundation and arranged through Huma Abedin in the form of meetings with Hillary Clinton.

And then, that's not all. Of course, a lot of these donors at the Clinton Foundation, which gave millions and millions of dollars, also helped enrich the Clintons. A lot of people forget that. A lot of these same entities invited Bill Clinton to speak for a huge sum of money.

So, the Clintons amassed almost, I guess now, $200 million over this period of time, where they were running the foundation. And there were a lot of interconnected points with the donors, to the speeches, to the influence peddling at the State Department. It should never have been set up, because they always knew that she was going to run for president. And, you know, appearance of impropriety, that doesn't begin to tell the story.

MACCALLUM: Yes. I mean, even if that were the bar though, that should be bar enough when you are the secretary of state. If it even looks like there is an opportunity for people to have influence over you, that ought to be something that you really want to avoid when you are in a government position.

So they set this up foundation, which as you say, was the vehicle except for maybe some publishing deals, it's the only vehicle by which he became extraordinarily wealthy.

So people's taxpayer dollars were going to pay for Hillary Clinton's salary as secretary of state, and support the Clinton family as a former presidential family. And then on the side, at the same time, they were basically building what some would call a foundation and some would call a business.

Remember, you cannot donate directly as a foreign entity or a, you know, foreign individual to an American campaign. That is in violation of campaign finance law. But they did it in a different way.

You know, they did it for the foundation. She had her private server. They thought it was all going to be locked down and we have a compliant media for the most part.

And they have been fighting this, Martha, for years. They did not want this information out. And now Hillary Clinton looks like she is in hiding from answering any questions from the press.

MACCALLUM: Yes, you're so right. And you called on the press at the Republican National Convention to do their job.

MACCALLUM: And it does seem as though, there is more intensity on this. I think a lot of people thought when the FBI made the decision that they would not go forward, that that was going to be it. But when you see Robby Mook coming out very passionately defending her, her husband now doing the same thing, do you think they are concerned about this?

INGRAHAM: Oh, please. Well, I think they are not going to be that concerned unless the journalists who are supposed to be acting as checks on government power occupy themselves, Martha, with something more important to the American people than whatever Donald Trump happens to be tweeting today.

I mean, the focus that they have on destroying Trump, and I'm not saying he has done everything right. But the focus on every minutia and everything, and then this actually goes right to the heart of what we are supposed to expect from public officials who are being paid for by us handling the most sensitive information.

But now a burn paper is not in a burn bag? I mean, this stuff is comical. If it weren't for our country's national security and the future of our presidency and our country on the line, it would be hilarious.

But, unfortunately, all of us could -- if she wins live under this scenario, where apparently this is all going to be accepted. And, Martha, remember, Hillary Clinton will be able to appoint every prosecutor, every U.S. attorney right with her friends, every regulation and have the Supreme Court that will not be a check on her.

Imagine that world in the United States of America if she has that much power, given what she did as secretary of state.

MACCALLUM: Laura, as a Trump supporter, do you -- are you pleased with the job that he is doing now focusing on this?

INGRAHAM: I think it's smart both for him to say, look, I'm on your side. I'm going to be fighting for the regular American that have been shafted in this under performing economy at the border and all of that.

She can't be trusted because during the time when so many of you were suffering, she used her government position to enrich itself and her family. I will work for you and fight for you. The Clintons have always look out for themselves, number one. I'm going to do it in a different way.

I think he has to keep reaching out to minorities. I think he has done a pretty good job so far. Go into minority communities and really create the backdrops for more personal interaction with the folks he needs to work on. I think it's been a good turn so far.

MACCALLUM: He is hearing you, because apparently he's going to be going into some of those inner city areas and communities in the coming days.

Laura, thank you. Always good to see you.