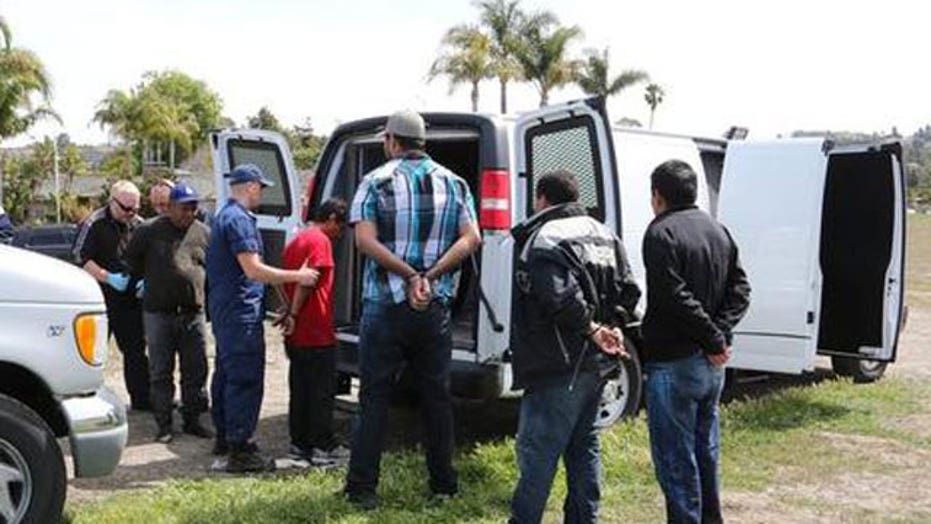 Do some Mexican elites secretly agree with Donald Trump?

O'REILLY: And in the "Impact Segment" tonight the man igniting the current criminal alien controversy is Republican presidential contender Donald Trump. Yesterday he talked with a reporter from NBC News.

UNIDENTIFIED FEMALE: Immigration is down. Why is this such a big topic for you right now?

TRUMP: Well, immigration is a very big topic. Take a look at all the crime that's being committed. Go take a look --

UNIDENTIFIED FEMALE: Research says crime does not match what you are saying. The Pew Research, which is independent --

TRUMP: Don't be naive. You are a very naive person.

UNIDENTIFIED FEMALE: Pew research says that there are for -- immigrants on the whole create --

UNIDENTIFIED FEMALE: I will get it out.

TRUMP: I mean I don't know if you are going to put this on television but you don't even know what you are talking about.

O'REILLY: Joining us now from San Diego Ruben Navarrette who recently wrote a column saying that some elites in Mexico and the U.S.A. agree with Mr. Trump on some issues. Define that for us, Ruben.

RUBEN NAVARRETTE, SYNDICATED COLUMNIST: Bill, great to be back with you. At the beginning of Donald Trump's anti-Mexican scree which as you have pointed out just this week in your "Talking Points Memo" was imprecise because it lumped together a bunch of people. The beginning of it began like this. Mexico is not sending its best people. And what I am here to tell you and what I said in this piece is that if you happen to be in Mexico City or Monterrey or Guadalajara or one of the cities there and you're a doctor, a lawyer, engineer you make good money and you have a Louis Vuitton and Mont Blanc pen in your lapel and all these things well, you agree with Donald Trump because you think you are the best Mexican God ever created.

And certainly Mexico can't be sending its best people because you are still in Mexico. So that is the underlying point of agreement where a lot of Mexican elites think Donald Trump is right.

O'REILLY: All right. On what kind of people are migrating to the United States illegally? The statistics say that most immigrants from Mexico don't have high school educations and about half of them are on means tested welfare when they get here which means that's not Social Security or Medicare, that's, you know, I'm not going to use the word "handouts" but that's safety net stuff. All right?

O'REILLY: So that the statistics say that it's a lower economic person coming here. Would you agree with that?

NAVARRETTE: I would agree with that. I would also say it's part of American history. The Irish, the Italians, the Jews who came before always came down on their luck, they were low on money but high on ambition and optimism and hard work. And frankly I would much rather have somebody who comes here from many of these countries with nothing, makes something in the United States and then becomes indebted to us than somebody who already was ready made and came in and felt they didn't owe us anything.

O'REILLY: Ok. But isn't it true that you have anarchy if you can't control who comes here and that's what we have now with the Kate Steinle situation -- we have anarchy. So I don't disagree with you that immigrants historically have come to the United States in working class situations -- laborers, right?

O'REILLY: And we're the strongest country on earth because of those immigrants. My ancestors, your ancestors were in that category.

However, you have a situation now where people are trying to justify illegal immigration, the whole deal --

O'REILLY: And you can't. You must regulate who comes in here. Would you disagree with that?

NAVARRETTE: No, I agree with you completely. I have taken a lot of heat from the Latino left, from other people who support immigration reform because I insist on using the phrase in my column "illegal immigrant". They won't even let me do that and I do it anyway. And I think there is an attempt on the left to minimize the offense.

O'REILLY: Now, it is also true, and you pointed this out in the past, that some American elites want cheap labor to flow across the border unimpeded because it helps their profit line.

NAVARRETTE: Right. And not just the elites but the American household, the number one employer of immigrants are housekeepers, are nannies, are gardeners.

O'REILLY: OK. But you have to have money to employ the nanny and the gardener and the house painter. So it's the Americans who are affluent who pay their salaries so, but I don't think that they would object if these people had papers. They need the labor. They would hire them anyway.

NAVARRETTE: That's right. They just don't care that they have papers or not. You and I both lived in Dallas, Texas. If you lived in Dallas at one point or in Phoenix or Los Angeles, you can make a middle class living and live an upper middle class lifestyle thanks to the ready, available labor that's there because of illegal immigrants.

O'REILLY: Now, are you surprised -- you are a San Diego-based guy, right?

O'REILLY: Ok. Are you surprised that San Francisco is so callous toward Kate Steinle? I'm shocked.

NAVARRETTE: Yes. They could have handled this so much better before and even now and you are absolutely right to bring up some of these issues. I think the point that needs to be made is sanctuary city policy, it goes back to 1989. It's been changed and modified over the years's -- it's not so lenient now.

There is an attempt by the Obama administration to get its hands as you see in this case on so many of the undocumented immigrants. And so there's been much more of an attempt to roll back some of that sanctuary policy.

But you are absolutely right. They don't get it. They are callous. They don't understand why people are outraged about this and it's just another way that they are detached.

O'REILLY: They are angry at me for bringing it up, for making a big deal out of it just like some people are angry at you for saying, hey you know Mexican elites they agree with Trump. So you get a lot of heat.

But anyway, we have got to tell the truth.

All right -- Ruben. Thanks very much.