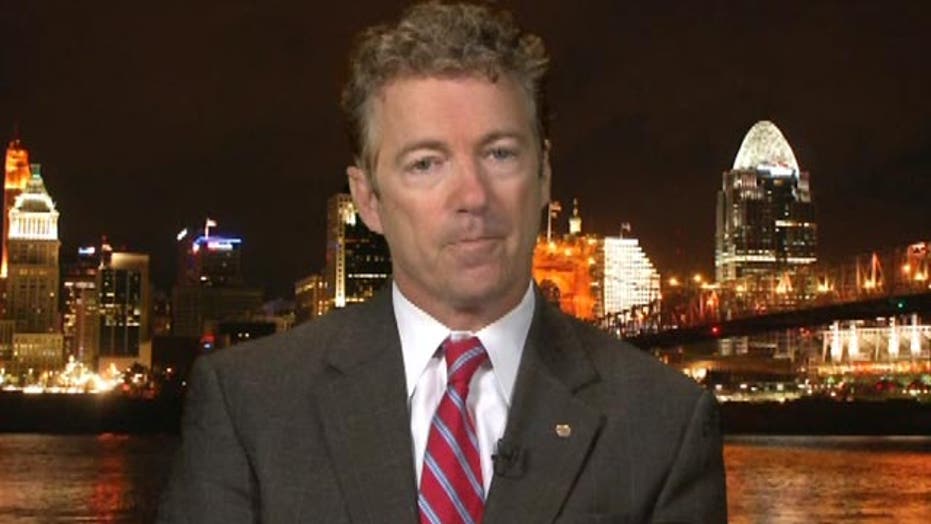 Will Kentucky senator run in 2016?

This is a rush transcript from "Hannity," July 25, 2014. This copy may not be in its final form and may be updated.

ERIC BOLLING, GUEST HOST: Political analysts and pundits alike think Kentucky Senator Rand Paul might be throwing his hat in the ring come 2016 to be the next commander-in-chief. So what would he do right now if he occupied the Oval Office? Would he stand up to Russian president Vladimir Putin and tell the Israeli people that they have a right to defend themselves against Hamas?

Well, here to answer those questions is none other than the man himself, Kentucky Senator Rand Paul. He joins us tonight from Cincinnati, where earlier today, he addressed the National Urban League. We'll have highlights of those remarks in just a moment.

Senator, welcome. Thank you for joining us.

So Senator, there's a lot of news today coming out of, you know, the Israel-Gaza conflict, one of them that the -- Senator John Kerry's -- Secretary of State John Kerry's cease-fire proposal has been rejected by Israel, another one being that the French have said, We have to have an emergency meeting tomorrow, Saturday morning. U.S., Britain, Italy, Turkey, Qatar will all attend.

Tell us where we stand on this, in your point of view?

And so really, all of it's a tragedy, but really, Israel has the right to defend themselves. And I frankly don't think it's the role of America to tell Israel what they can or can't do with regard to defending herself.

BOLLING: So do you think Secretary of State Kerry's proposal helped or added fuel to the fire, so to speak?

PAUL: You know, I think there's a role for America to try to be a facilitator of peace, to try to find a ceasefire. But really, they need to find something that's acceptable to both but also doesn't involve America basically telling Israel to do anything that would be deleterious to their defense.

So I mean, I think about it this way. If in Washington, D.C., someone in Baltimore were lobbing missiles into Washington, D.C., would we have the right to defend ourselves? Absolutely. And it's also difficult when you have people attacking you that are attacking you with missiles that really are intermingled with the civilian population. So it's a very difficult situation, but Israel does have the right to defend themselves.

BOLLING: So Senator, Israel's asked the United States to give them some financial support with their Iron Dome system. Is that a good idea to send them additional aid?

PAUL: Yes. I've seen the Iron Dome system firsthand. I've seen the video response, where you see the missiles being, you know, blocked and cities saved from these missiles. So yes, I think it's a good joint effort.

In fact, I've gone a step farther. I think the Iron Dome might be usable within the United States and that we should continue to develop missile defense systems. They say this is more for short-range missiles, but essentially, on 9/11, we were attacked with short-range missiles posing as airplanes. So I think there probably is a need for some kind of defense for our cities, and that working in conjunction with Israel and Iron Dome is a good idea.

BOLLING: OK, Senator, also, one of the conflicts brewing right now, the Russia-Ukraine conflict going on. Now, we've heard late this afternoon that Russia -- Russia, the country, was pushing some military assets to the border, maybe some missiles. What about helping out the Ukrainian people?  Would you send them some missile defense systems?

PAUL: You know, I've been in favor of helping the Ukrainians with arms and/or monetary support. I also think, though, that in order to have a unified front to really stare down Putin on this, it would be very helpful to have the European Union involved.

And this also means that we need leadership in America. We need a president who can call, you know, the chancellor of Germany and have a good relation. The fact that we haven't had such good relations with the chancellor of Germany makes it harder, I think, for America to be a leader and work in conjunction with Europe on this. But absolutely, for this to have any effect, to stare down Putin at all on these things, it needs to be a unified message from the free world that we're not going to put up with it.

BOLLING: But Senator, what if it's not? What if the EU says no?  What if Germany says no, we get too much of our oil, Netherlands said, No, too much of our energy is supplied by Russia. We don't want to play. Does America step up and say, Well, we'll do it. We'll step up with some severe sanctions, which we could do with the oil sector.

PAUL: Yes, I think we do. I'm just saying they have more effect if we do have partners in this. It's the same way with sanctions on Iran.  I'm for sanctions on Iran with or without Europe, but they have more effect with Europe being involved. And so I think that, yes, we do step up. And yes, we do help -- we do and should try to help the Ukrainians defend themselves.