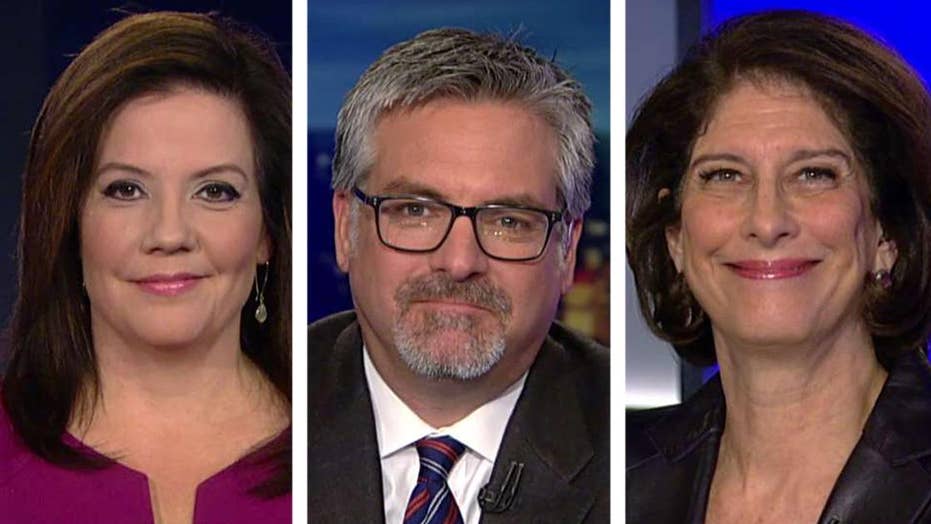 How will the release of the classified memo play out?

This is a rush transcript from "Special Report with Bret Baier," February 1, 2018. This copy may not be in its final form and may be updated.

REP. ADAM SCHIFF, D-CALIF.: This memo is really a spin on not just a set of particular documents but broader classified information than that.

REP. BOB GOODLATTE, R-VA.: This memo is important to the American people understanding what's going on in the Department of Justice and the Federal Bureau of Investigation.

REP. JIM HIMES, D-CONN.: I will tell you that it is full of falsehoods. It is shoddy and poorly written memo.

REP. PETER KING, R-N.Y.: It's very significant. I don't want to oversell it, but I'm saying this is vital, it's essential for the public to see. And it's certainly important in the body of evidence to be out there.

RAJ SHAH, WHITE HOUSE DEPUTY PRESS SECRETARY: It's going to get review from all relevant stakeholders, that includes intelligence folks and folks in the law enforcement community. They will be advising the president and he will make a decision at the appropriate time.

BRET BAIER, ANCHOR: We've covered it, we have talked about it. A lot of people have talked about it. We think it's coming out tomorrow morning actually. A lot of talk today about edits made before the White House saw it and a back-and-forth on it. The intelligence committee putting out a statement in the majority, "It's increasingly strange attempt to thwart publication of the memo. The committee minority is now complaining about minor edits to the memo including grammatical fixes and two edits requested by the FBI and the minority themselves. The move to release the memo was absolutely procedurally sound and in accordance with House and committee rules. To suggest otherwise is a bizarre distraction from the abuses detailed in the memo which the public will hopefully and soon be able to read for themselves." We think that will happen, again, tomorrow morning.

Let's bring in our panel: Steve Hayes, editor in chief for The Weekly Standard; Mara Liasson, national political correspondent for National Public Radio; and Mollie Hemingway, senior editor at The Federalist. OK, Steve, where are we on this and where it stands? It seems the story has now some of it gone to is the memo going to be all that even Republican lawmakers think it's going to be?

STEVE HAYES, THE WEEKLY STANDARD: I'm not sure at this point that it possibly can be because so much has been made of it. The buildup has been so great. Having said that, I think there will be significant new information in the memo. I think that what we learn about the behavior of certain law enforcement senior federal law enforcement officials will be troubling to people. Is it enough to change the debate in Washington about Trump and Russia and the FBI and all this? I don't think it probably is, but I think we will learn new information. It will trigger another round of finger-pointing back and forth. But it will be nice at least to understand what the claims and counterclaims are in a way that we haven't been as we've debated this for the last couple weeks.

SPEAKER OF THE HOUSE PAUL RYAN, R-WIS.: I think they would love nothing more than to play politics and change the subject. Devin Nunes helped shepherd through a reauthorization of 702 which is the foreign terrorist foreign surveillance law, so he is focusing on keeping our country safe, focused on national security. I think what they are trying to do is just sidetrack us with some political game.

MARA LIASSON, NATIONAL PUBLIC RADIO: That was really interesting today because he went on to say let me tell you what this memo is and isn't. The memo is Congress doing oversight of the FBI. What it isn't is an attack on our institutions. It's not an attack on the FBI, the Department of Justice. It's not an attack on Robert Mueller or his investigation. The fact that he even had to say that shows you the kind of unprecedented moment that we're at, which is you've got the president at war basically, feuding with his handpicked FBI director, his handpicked deputy attorney general who both didn't want this memo to come out. That said it's omissions led to an inaccurate picture. And that's something we haven't ever seen before.

MOLLIE HEMINGWAY, THE FEDERALIST: It's not surprising that the FBI would be freaking out about this memo coming out. They have expressed a lot of concern. Nobody likes to have their dirty laundry aired and his reportedly will air some of that dirty laundry. It's a little more disconcerting how many other people have joined with them to keep Americans from learning about these abuses at the FBI and just learning more information.

Adam Schiff did a last ditch effort to try and fight the memo from being available to the America people. He fought the subpoenas that led to the information about this. There is a general obstruction there that we've seen from Democrats on the committee, also from the FBI themselves. They spent the entire last year obstructing requests for information. So I think it is wise to temper expectations. It's not going to be a huge deal. At the same I think it's the beginning of a long process of figuring out exactly what was going on at this agency and learning more and just bringing it to light.

BAIER: So what do you make of Comey's tweet, I just put it earlier on the show, "All should appreciate the FBI speaking up. I wish more of our leaders would. But take heart. American history shows that in the long run weasels and liars never hold the field so long as good people stand up. Not a lot of schools and streets named for Joe McCarthy."

HEMINGWAY: And there will also not a lot of schools or streets named for James Comey in all likelihood. It's very odd he would make this reference to McCarthy after Comey himself perpetuated this Russia collusion theory, privately admitting to people in the White House that there was not investigation of Donald Trump but publicly intimating that there was.

BAIER: It is interesting to see former FBI director, former CIA director Brennan on Twitter tossing balls to the public discourse occasionally like this.

HAYES: They are well within their rights to do that.

BAIER: Of course. I am not saying it's against the law.

HAYES: I think it's to a certain extent informative. In many ways I think our colleagues in the mainstream media have shown an incapability of imaging the people like James Comey would be political. People like John Brennan would be political. And for those of us who reported on the various episodes over the last eight years from Benghazi to Guantanamo to the Iran deal, it's pretty clear that they were capable of being political.

So I think one of the things that will come out of the release of this memo is we will see more politics in all likelihood. Does that then invalidate the entire investigation into Trump and Russia? I don't think it does. There are many outstanding questions that we don't have answers to right now. If the FBI played games with FISA applications, does that somehow exculpate Donald Trump Jr. from his meeting at Trump Tower from misleading people about it? There is still an investigation to be had even if it's the case that --

BAIER: To that end, Mara, The New York Times has an article saying, among other things, Mr. Corallo, a P.R. person is planning to tell Mr. Mueller, the Special Counsel, about a previously undisclosed conference call with Mr. Trump and Hope Hicks, the White House communications director.

Corallo planned to tell investigators that Miss Hicks said during the call that emails written by Donald Trump Jr. before the Trump Tower meeting in which the younger Mr. Trump said he was eager to receive political dirt about Mrs. Clinton from the Russians, quote, "will never get out." That left Mr. Corallo with concerns that Miss Hicks could be contemplating obstruction of justice.

Hope Hicks' attorney has issued a statement. "As most reporters know, it's not my practice to comment in response to questions from the media, but this warrants a response. She never said that. And the idea that Hope Hicks ever suggested that emails or other documents would be concealed or destroyed is completely false."

They're zeroing in on the Air Force One meeting about the release, the press release that came out --

But what I think it so interesting about this whole debate is that it wasn't that long ago the Democrats were saying the FBI was politically biased against Hillary. They were saying there were some FBI agents who leaked to Rudy Giuliani, put pressure on James Comey to release information about the emails found on Weiner's laptop. Now we've got Republicans doing this. So maybe there is cabals on the left and the right in the FBI but they're definitely on the hot seat.

HEMINGWAY: I think people should think less about whether this benefits Hillary or benefits Trump so much as we need to have an FBI that can be trusted no matter who is being investigated, and they need to follow procedures and not be political. And they did hurt Hillary Clinton and they did possibly hurt Donald Trump. There is no conflict between that.