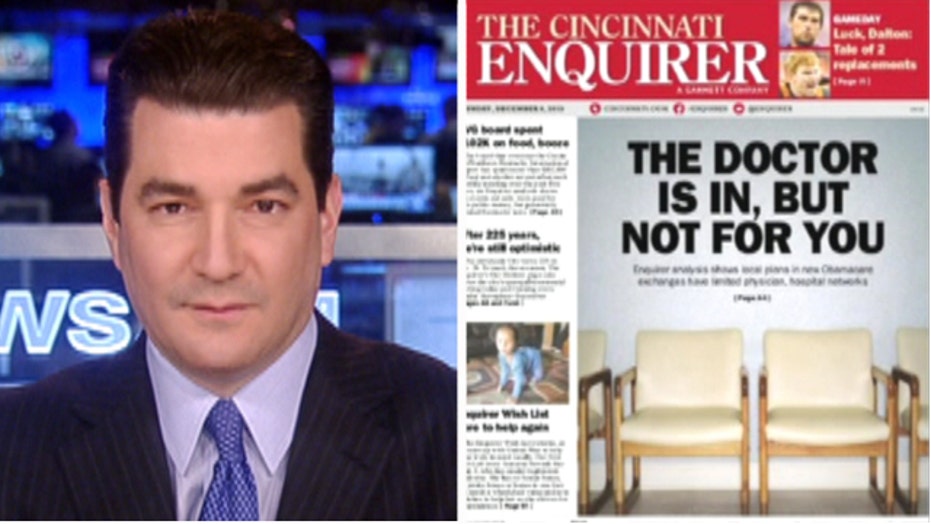 This is a rush transcript from "The Kelly File," December 9, 2013. This copy may not be in its final form and may be updated.

MEGYN KELLY, HOST: We are seeing new reports tonight about another possible consequence of the health care overhaul. While media outlets continue to dig into the issue of losing your plan or losing your doctor -- you can see this cover here on the Cincinnati Enquirer -- we are now hearing that you may also be losing your prescription drug coverage, or at least find to get much more expensive.

Dr. Scott Gottlieb is a practicing physician and former senior policy adviser to the Centers for Medicare and Medicaid Services. Doctor, good to see you again. And so, why is this a concern about possibly loosing or seeing a sharp uptick in the costs under your prescription drug coverage?

DR. SCOTT GOTTLIEB, PRACTICING PHYSICIAN: Well, there are two issues. One is the co-pays on the drugs are very high. So, on average there is about 40 percent you're going to have to pay on branded drugs compared to about 25 percent in the private sector.

But the bigger issue is that the formula, the list of drugs or the plans cover in many cases aren't very long. And if the drugs aren't covered, then you're on your own. You basically have to pay for it entirely out of pocket. And the money that you spend on those drugs doesn't count against your out of pocket limits and it won't count against your deductible. This could cost patients with special conditions, patients who need special drugs a lot of money. Literally tens of thousands of dollars a year.

KELLY: I know you referenced a drug that is commonly used to treat multiple sclerosis.

GOTTLIEB: Right. This was a plan in North Carolina they looked at, where a lot of specialty drugs for rheumatoid arthritis, drugs for multiple sclerosis, weren't in the formula, which means patients had to pay for those entirely out of pocket on their own. This is very different to what happens right now in commercial insurance. In commercial insurance, a drug isn't on your formula typically there will be coinsurance, meaning that you will be responsible for some of the costs but the plan will pick some of the costs as well. And it will also count against your out of pocket limits and your deductable.

In this case, it doesn't count against your out of pocket limits or your deductible, so literally the sky is the limit on how much it can cost you. And there is so much variability in these plans that patients are going to have to be very careful what plans they select. Because in some formulas, it's very tight. And not a lot of drugs are covered. And others, it's a little bit more generous but there is a lot of variability and not a lot of information.

KELLY: You know, we talked last week about how, now patients are going to be finding that their doctors aren't covered by ObamaCare and now you are saying that many of the prescription drugs that they liked and were taking are not going to be covered by ObamaCare. And in both instances, we talked about how if you go outside of the network, if you try to get the doctor anyway, if you try to get the prescription drugs anyway, you're not going to get a reimbursement along the lines of what you are used to. It sounds like the HMO system that we used to use in this country much more frequently than we do today.

GOTTLIEB: And that's what it is, really. It's the old HMO. And the other thing is you can't buy up your benefit. If you spend more money, buy the so-called platinum plan or the gold plan rather than the bronze plan, in many states you're getting the exact same network and the exact same drug formula. All you're doing is getting a lower co-pays and deductibles.

So, buying a platinum plan, you're paying a higher premium, you're effectively prepaying your copayments but you are not getting a different doctor network. So, the idea that you could actually spend more money in a lot of states and get a better benefit, you can't do it. In some states you can. But in a lot of states, you can't. The plans are exactly the same.

KELLY: Well, that's interesting. So, we're going to get to this in a little bit later in the show. You are speaking I think to Dr. Emanuel suggestion on "Fox News Sunday," Zeke Emanuel, that if you like your doctor you can keep him as long as you're willing to pay more. And your comment here appears to be, that's not true either. Because even paying more won't get you the doctor. The plan won't allow that.

GOTTLIEB: Right. You can't buy a better network in most of these cases. If you go online and you look at the plans, the doctor network for the bronze plan is the same exact network that is used for the platinum plan. I have done it and I have looked at it. You can go completely out of pocket if the doctor isn't in your network. You can go see that doctor, but again, there won't be coinsurance --

KELLY: Right. You can always do that.

GOTTLIEB: Right. There won't be coinsurance and it won't count against your deductible. So it's tough.

GOTTLIEB: Thanks a lot.