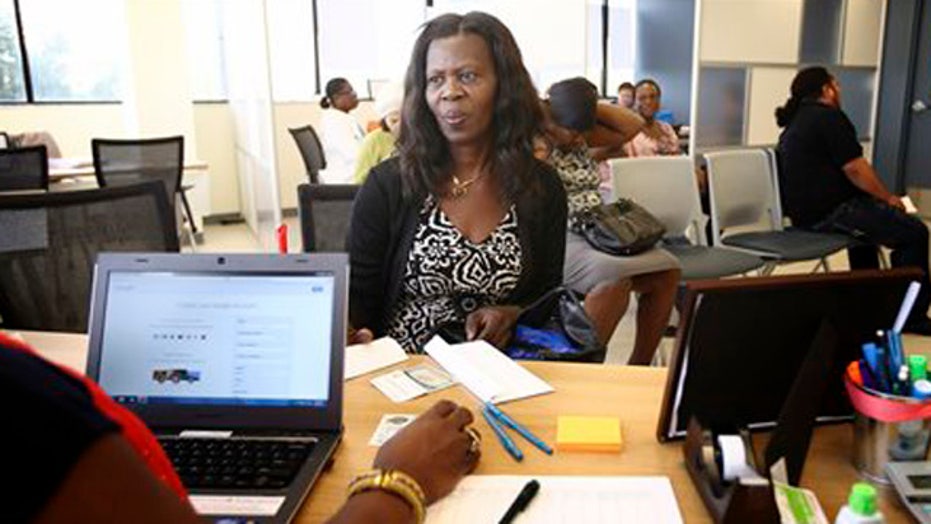 How will all uninsured Americans be covered by January 1?

This is a rush transcript from "Hannity," December 6, 2013. This copy may not be in its final form and may be updated.

HANNITY: How are you?

HANNITY: I say it affectionately.

HANNITY: Nobody wants your law! Nobody wants it because the whole thing is predicated on a lie! The entire law -- false promises, predicated on one lie after another! Where is anybody in your party to join and say this is not right, this is a bait and a switch. The American people deserve better. Where are the Democrats?

UNGAR: Well, wait. Let's get something straight. By your own graphic, at least 38 percent want my law.

UNGAR: I hear you. But if you -- if you looked at this just a few weeks ago, it was different. Look, how can you be surprised that the American public is freaking out when all any of us are doing on television today is talking about this law, with most people criticizing it?

HANNITY: And Rick Ungar -- wait a minute! You're a rich Democrat!

UNGAR: What's that got to do with it?

HANNITY: You're a limousine liberal!

HANNITY: Well, first of all, the president's down 24 percent among Hispanic Americans. The millennials -- they want to throw him out of office right now, another big part of his constituency. But you're not part of the millions of people that got cancellation letters...

UNGAR: First of all, I am in the "Obama care" pool. I am now buying my own health insurance...

UNGAR: ... through the exchange.

HANNITY: You're full of crap!

UNGAR: I'm telling you the truth.

HANNITY: I don't believe that!

UNGAR: Do you want the number?

HANNITY: You're one of the few people!

UNGAR: Do you want the numbers?

HANNITY: You're one of the few people!

UNGAR: I've already said it on TV, so I'll tell you the numbers. I have been paying $2,200 a month because I'm uninsurable. You know what I'm going to be paying for the best policy available on the New York exchange?

HANNITY: You know who's going to subsidize -- the sick...

HANNITY: Wait a minute! The sick...

UNGAR: I don't get a subsidy.

UNGAR: You know that.

HANNITY: David, the sick, the elderly, the uninsured are being subsidized by young people that don't want to sign up!

DAVID LIMBAUGH, AUTHOR AND ATTORNEY: I think the whole thing is unconscionable. Obama promised, in effect, that he would insure everybody, and you can argue -- you can quibble over it and argue that 50 million were uninsured. In fact, some 8 to 10 million were falling through the cracks. It was a misleading figure from the start. Obama -- it was enough for Obama to change the entire health care system, to damage the entire economy, and now 5 percent is a de minimus figure to him. Eighty percent of working (ph) Web site is substantially working. Five percent is no big deal!

UNGAR: And he just said 90 percent. But even that aside, do you know how much Jeff Bezos would have paid to have Amazon working at a 9 of 10 success rate in the first six months of that? He would have...

UNGAR: He would have with given anything...

UNGAR: Any Web site that starts up is going to have trouble.

LIMBAUGH: The first six months -- after they had three years and $600 million to get it going? This is outrageous!

UNGAR: It still had trouble.

UNGAR: But wait a second!

HANNITY: Stop. Wait, wait a minute! That -- that 5 percent number the president -- is another lie because when you look at their own numbers that they knew back in July of 2010, David, they knew that it was going to be a substantial percentage of the individual market, up to 80 percent, 65 percent of small businesses and 45 percent of large businesses!

LIMBAUGH: And argued it in federal court, and Andy McCarthy uncovered that -- the -- the admission that was in a brief that the administration made. And -- and so they deliberately misled the people.

UNGAR: No. Nobody has ever said that.

LIMBAUGH: ... throughout the entire...

UNGAR: What architect of "Obama care" has...

LIMBAUGH: I don't remember which one, but somebody just admitted the other day, redistribution.

LIMBAUGH: But it doesn't matter if they admit it!

LIMBAUGH: Obama has admitted it!

UNGAR: Let me ask you a question about the 5 percent, OK? I, too, have sympathy for anybody who got a cancellation notice and is going to have a problem re-signing up. I really do. But for all of you people who are making such a big fuss out of this, where was your concern? Let's use your number. Let's say it is only 10 million...

HANNITY: Stop for a second!

UNGAR: Where was your concern for them?

HANNITY: You're trying to get...

HANNITY: The president made specific promises! That's the -- that's what is at issue here.

LIMBAUGH: But it's all -- yes, he did. And we can't -- you can't get away from that. But we did have ideas, and they were consistently shot down, health care -- health savings accounts...

UNGAR: Love them. I have no problem with it.

UNGAR: And by the way, they still exist.

UNGAR: They did not get shut down.

LIMBAUGH: ... allowing portability between states, changing the discriminatory laws between employer and privately owned plans, which is a big deal.

UNGAR: All for that, too. But can we -- can we take a minute to talk about the state idea?

HANNITY: I want to go off on another area here because we've kind of debated this to death. Here is where your president is having a big problem.

UNGAR: He's your president, too.

HANNITY: OK. Honesty and trustworthiness. If you look at all these polls, American people don't think he's honest, competent or trustworthy.

HANNITY: But let me give you examples. And this week, it got worse because the White House said three years ago when Uncle Omar was arrested on DUI, who had faced deportation orders, that Uncle Omar -- they said they didn't know him! Now they have to admit this week they know him!

HANNITY: They lied about Benghazi!

UNGAR: Uncle Omar is not a lie. I mean, that's already been proven now.

UNGAR: No, he's not. And by the way, they never asked him two years ago from...

HANNITY: The White House issued a statement he didn't know him!

UNGAR: ... from the press office. This time -- yes, but they never asked him first. This time, they asked him and he gave a very truthful answer. He did. Come on.

LIMBAUGH: But let me tell you one...

UNGAR: There's enough serious things to get into than to waste time on that.

LIMBAUGH: And one of them -- and one of them that he unequivocally lied about is the video about Benghazi! That was a complete lie, a complete fabrication! And they arrested a man, used all the power and resources of the government to arrest the guy and railroad him...

HANNITY: ... purposely lied to us!

UNGAR: Even though there are things we shouldn't know and that you would support us not knowing...

LIMBAUGH: No, that would never justify coming out and affirmatively lying about a video that was -- that was...

UNGAR: Well, he didn't lie about a video. What did he lie about on the video? He just said that...

HANNITY: He said the video...

UNGAR: He knew better. He knew -- he may not have known better.

HANNITY: He did know better!

UNGAR: Wait. How did we even get to Benghazi?

UNGAR: Did I not say on this show that he lied about "If you want to keep your insurance"...

HANNITY: You agree the president's a liar?

UNGAR: No, I agree that all presidents occasionally lie.

LIMBAUGH: See? There you go!

HANNITY: All right, let me ask another question.

UNGAR: Yes. But I do hope that the American people will make themselves better educated...

HANNITY: Then why not...

HANNITY: Listen, I'm not the biggest quoter of Gallup, but the overwhelming majority of Americans -- they want it either repealed or major changes. Wait a minute! Why won't the president say, You know what? I made promises we can't keep. Why don't we cut our losses and debate this to get a system that you would buy into?

UNGAR: You know what? I don't object -- I think the president made it clear that he is always up for further debate and further input.

UNGAR: And by the way, setting the president aside, I feel that way. There has never been a major law passed in this country that did not need to be revised and amended over the years.

UNGAR: Every single one.

LIMBAUGH: He specifically says, We're not going back on this! No matter how many people it hurts, we're not...

UNGAR: He said, We're not going to get rid of it. He never said that he wasn't...

HANNITY: He said, Not while I'm president.

UNGAR: Honestly, he couldn't be more clear. He just said it the other day.

UNGAR: Well, at least you came off of that.

LIMBAUGH: No, no! Because he did -- he did say we're not going back! He doesn't intend to go back. He intended to hurt people because he knew...

UNGAR: He intended to hurt people?

UNGAR: For what reason?

LIMBAUGH: To advance statism and for redistribution. I'm totally serious.

UNGAR: So -- so which people did he intend to hurt?

LIMBAUGH: They were collateral damage...

LIMBAUGH: They were collateral damage. He willing to hurt them because he was hell bent on getting socialized medicine!

UNGAR: I don't think the Democrats are that clever.

HANNITY: If you -- if you go back and read the November 2nd edition of The Wall Street Journal, they debated in the White House July of 2010 whether to tell us the truth because they knew millions of Americans would lose their care. They consciously decided not to tell us the truth.

UNGAR: I completely agree with you.

HANNITY: Then the president is a liar!

UNGAR: No, wait a second.

UNGAR: No. You have to make a very careful separation here. I have said it -- I said it on this show that I believe the president fully knew that he could not make that promise. And I got to tell you, as a journalist, I called the White House and said something to them the day he first...

HANNITY: Yes, they really listened to you.

UNGAR: They really listened to me, exactly.

UNGAR: But wait a second. Don't confuse -- I'm agreeing with you. Don't confuse the fact that they did that, which they should never have done, and now they're paying for it, with the program itself. This is what's getting conflated, and it's a huge mistake.

LIMBAUGH: People's eyes are off the substantive problems of "Obama care"!

UNGAR: People's eyes were never on the substantive "Obama care" because of all...

HANNITY: You know what this is? This is the ends justifies the means.

HANNITY: No, they did it purposely!

UNGAR: I'm not defending it.

UNGAR: What happens the moment you repeal it? Tell me.

HANNITY: We got to go.