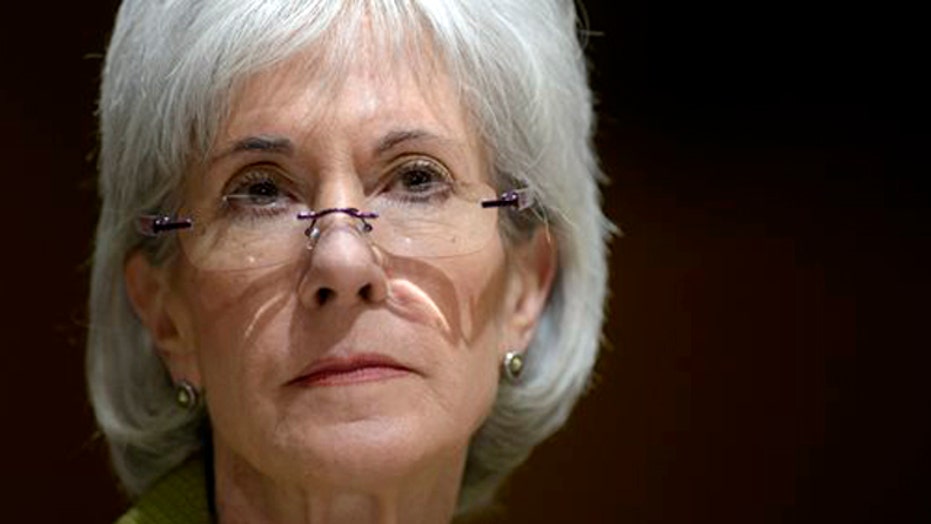 How the ObamaCare cloud will hang over Dems in 2014

This is a rush transcript from "Hannity," April 11, 2014. This copy may not be in its final form and may be updated.

SEAN HANNITY, HOST: And joining me now to explain what impact Sebelius's resignation will have on Democrats vulnerable because of ObamaCare in the 2014 midterm elections, from the University for Virginia Center for Politics, Larry. Sabato.

Larry, Ed mentioned and referenced, you know, what happened with Sebelius today -- Oops, I can't find the page. Let me play it for you. And is it sort of a symptom of the entire rollout and where ObamaCare is? Watch this.

KATHLEEN SEBELIUS, HHS SECRETARY: Their stories are so heartening about finally feeling secure and knowing they can take care of themselves and their families -- unfortunately, a page is missing.

SEBELIUS: So I'm just grateful for having had this wonderful opportunity.

LARRY SABATO, UNIV. OF VIRGINIA CENTER FOR POLITICS: Yes, I'd like to know what was on that page.

SABATO: And who grabbed it.

SABATO: But look, you know, Sean, the important thing is this. Remember when the cabinet officers walk into the State of the Union address? I'm always struck by how completely anonymous they are. Now, Sebelius is better known than most. I think she's leaving now so that most people will forget about her -- forget about her by November.

But it doesn't matter. This has been going on for years. The most politically interested and active people who are precisely the people who vote in a midterm election made up their minds about ObamaCare a long time ago. And every recent poll save one has shown that ObamaCare is still unpopular nationally by eight to 12 points, and in the red states, where the Republicans are challenging Democratic incumbents, it's more like 15 or 20. So of course, ObamaCare is going to continue to be a major issue.

HANNITY: And it even got as low as 26 percent recently in one poll. Let's go through the history of this. And then my question coming out of it is going to be -- this is ObamaCare. You know, they spent, what, $607 million, had four years go get a Web site up and ready in the years 2011, '12, '13 and '14. They still couldn't get it working right, that astronomical figure. Here's, like, a montage of Kathleen Sebelius' history.

SEBELIUS, JUNE 4, 2013: This is an incredibly agonizing situation where someone lives and someone dies.

SEBELIUS, JULY 16, 2013: I've got some good news for you. It isn't your typical government website. We've made it, I think, very easy to use.

SEBELIUS, OCT. 30, 2013: The website has never crashed. It is functional, but at a very slow speed and very low reliability.

REPORTER: The screen says, "Sorry, our system is temporarily down."

UNIDENTIFIED MALE: That's going to be a -- still continue to be a tough sale, but we'll see how that plays out over the coming months. All right, Secretary Sebelius, thank you so much for being with us this morning. I think we've probably lost sound here or something.

SEBELIUS: Thanks for having me.

HANNITY: Larry, my question is, all the promises, keep your doctor, keep your plan, save money, all these millions of Americans, they're not getting that promise, and then a website that we spent hundreds of millions of dollars on -- do any of these candidates -- are they able to overcome that?

SABATO: Personally, I don't think so. Only a few of them are really attempting to defend ObamaCare, spending money to do it or even time on the stump. The smarter ones, frankly, are running away from it and trying to emphasize other issues that might stir the Democratic base.

Look, Sean, again, when you look beneath these surface numbers, what you find is this. About two thirds of Republicans are highly motivated to vote because they believe ObamaCare is wrong and it is a very important issue in the campaign.

SABATO: Only about half of Democrats are motivated by ObamaCare and less than half of independents are. So it's Republicans I think that will disproportionally turn out in November and sway the election.

HANNITY: A recent poll I saw, we had Karl Rove on the program, had eight Republicans leading and picking up seats.

Let's go to the Hannity big board and look at four of them. Larry, I want you to pay close attention. Red state Democrats, we're got Mark Pryor in Arkansas, we've got Begich in Alaska and Mary Landrieu in Louisiana and Kay Hagan in North Carolina. Now, of all of these candidates, how many of them put out a statement as it relates to Kathleen Sebelius stepping down? Mark Pryor? No, a big x for Mark Pryor. Begich a big no, same thing with Landrieu, no statement, and Hagan same thing. Is that by design?

SABATO: Probably. I'm sure some of them, you know, called her privately and asked that it be kept off the record. Obviously, they don't want to be associated with her and all the glitches in the rollout, and for that matter they don't want to be associated with ObamaCare generally. A few of them are defending ObamaCare. I've noticed that Senator Begich in Alaska has said some favorable things, but, you know --

HANNITY: They still voted for it.

SABATO: He won six years ago against an indicted Republican who was indicted a week ahead of the election by just a few thousand votes. So I wouldn't exactly call him secure.

HANNITY: Kay Hagan, Mary Landrieu, they made the same promises as the president, so.

Larry, always good to see you. Thanks for being with us, appreciate it.