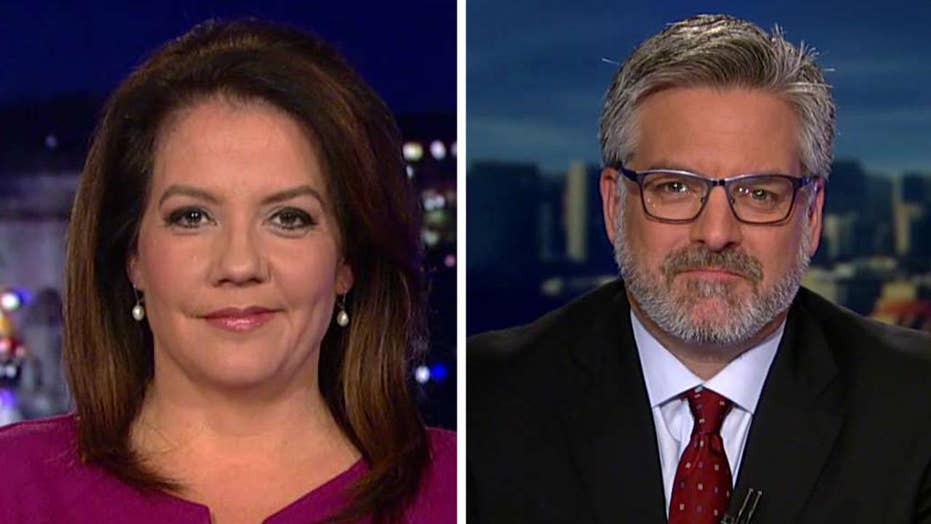 How the NYC attack could affect Trump's policies

This is a rush transcript from "Special Report with Bret Baier," November 1, 2017. This copy may not be in its final form and may be updated.

PRESIDENT DONALD TRUMP: This animal who did the attack.

TRUMP: He came in through the diversity program, as you know. An we're going to stop that.

MILLER: It appears that Mr. Saipov had been planning this for a number of weeks.

BRIAN KILMEADE, FOX NEWS: The reports now say that he is the hospital bed and he's gleeful about what he did.

MILLER: He appears to have followed almost exactly to a t the instructions that ISIS has put out in its social media channels.

TRUMP: Send him to Gitmo. I would certainly consider that, yes.

BRET BAIER, ANCHOR: So the sound today as we get the criminal complaint about this terror suspect in New York, eight people dead as a result of his actions. The president is considering some changes in policy, tweeting out today "The terrorists came into our country through what's called a diversity visa lottery program, a Chuck Schumer beauty. I want merit-based."

The minority leader in the Senate responded, "President Trump instead of politicizing and dividing America which he always seems to do at times of national tragedy, should be focusing on the real situation, antiterrorism funding at which he proposed cutting in his most recent budget. I'm calling on the president to immediately rescind his proposed cuts to this vital antiterrorism funding."

With that, let's bring in our panel: Steve Hayes, editor in chief of The Weekly Standard; Anna Palmer, senior Washington correspondent for Politico, and Mollie Hemingway, senior editor at The Federalist.

First, Steve, the details in this criminal complaint are pretty amazing, how much this terror suspect is gloating about the attack and how tied he is to ISIS or at least in the videos and propaganda around this.

STEVE HAYES, THE WEEKLY STANDARD: Sometimes it's hard to understand just how evil the people who want to attack us are. This makes it very clear how evil they are.

Look, I think what this attack makes clear as well is the United States needs to do a better job of looking carefully at who we are letting into the country. There's no question about that. I didn't think a ban -- the original Muslim ban as proposed by then candidate Donald Trump was the answer. It was very clear, and I would think there would be bipartisan support for better scrutiny the people that we are letting in.

BAIER: The top recipients of the diversity visa program, as you put them up on a list here, Nepal, Egypt, Iran, the Republic of Congo, and Uzbekistan where this guy came from, 2,378 of them total. It seems like there may be a change in policy coming.

ANNA PALMER, POLITICO: I don't know. I think if you actually look at where immigration policy has been on Congress and this White House, it's not gone anywhere. If anything there's going to be something on DACA and DREAMers, probably before this actually happens. But you could see some kind of agreement on the funding issue. That's going to be something that you will see maybe coming in the next couple of weeks.

BAIER: There were some channels, some Democrats pointing specifically to what they say is a dichotomy, a difference between the reaction to the Las Vegas shooting and the reaction today. Take a listen to this.

WHITE HOUSE PRESS SECRETARY SARAH SANDERS: I think one of the things we don't want to do is try to create laws that won't stop these types of things from happening.

TRUMP: We need strength, we need to resolve. We have to stop it. So we're going to get rid of this lottery program as soon as possible.

BAIER: In other words you needed a day after the attack, it should be about the victims, not gun policy in one case or immigration policy in another.

MOLLIE HEMINGWAY, THE FEDERALIST: There's a really good argument for not politicizing events like this, waiting for families to be notified and having some time for people to process and mourn the lives of people who have died in these attacks.

It is really interesting to hear people who immediately politicized the Las Vegas tragedy which is a month ago, we still don't know what happened in that case, immediately moved to politicize it, blaming all American gun owners, now say that when you have someone like this guy who is proudly asking to hoist an ISIS flag in his room, we don't need to wait to find out what motivated him because he's made it very clear what motivated him to say we can't address any political solutions is a very weird thing when they were singing such a different tune a month ago.

BAIER: It's another big day, didn't get a lot of coverage out of places, but the release of these Usama bin Laden documents from the compound in Pakistan. Steve, you've been following this from the very beginning, we've been following it here on Fox. It's a little frustrating in that there are almost a half million of these documents in Arabic as we try to go through them piece by piece. What are the highlights so far that you all see?

HAYES: I think this is important because it tells us about the evolving threat from jihadists and it tells us about the saw that the previous administration talked about that evolving threat. And if you look back at January 19th of this year, the DNI put out a statement in which they said we're releasing the final cache of bin Laden document, bringing the total to 571 documents, 571. We have 470,000 documents released today. What that makes clear is the DNI, the Obama administration was not being honest about what they had.

The other thing in that January 19th, less than 24 hours before Barack Obama left office, in that release says that the relationship between Iran and Al Qaeda were characterized by hatred and suspicion. Well, we saw today the release of a wedding video of Hamza bin Laden, Usama bin Laden's son. That wedding video was shot in Iran. There is a 19-page document detailing the relationship between Iran and Al Qaeda.

While there were certainly tensions, nobody should downplay those tensions, the senior Al Qaeda official who wrote that document said that we've got everything we need from this. And Usama bin Laden in his own hand once called Iran the main artery for the growth and sustenance of Al Qaeda.

BAIER: So piece this together for somebody just following this. These documents are obtained at the rate of Usama bin Laden at the time the Obama administration officials said it was a treasure trove, a college library full of information. But yet we don't get them over all these years as the Obama administration says that Al Qaeda is on the run, bin Laden is dead, GM is alive. And yet now we are just going into what exactly the release was.

HAYES: I would go even further. They released selected documents. They released 17 documents in May of 2012 on the one-year anniversary of the raid. Those documents six months before the 2012 election were designed to show Usama bin Laden out of it, not really in charge, not with any day-to- day coordination of the network. And in fact now you see that the broader set of documents, and bin Laden was in charge of everything from crops that they were growing in Africa to maintaining the affiliates, to decentralizing power of Al Qaeda creating these strong affiliates around the world so that they couldn't be targeted by the United States. It's a treasure trove now and I'm glad that historians and other experts are going to have an opportunity to look through it.

BAIER: And the question about Iran is a really big question especially because the Obama administration wanted that Iran deal so bad.