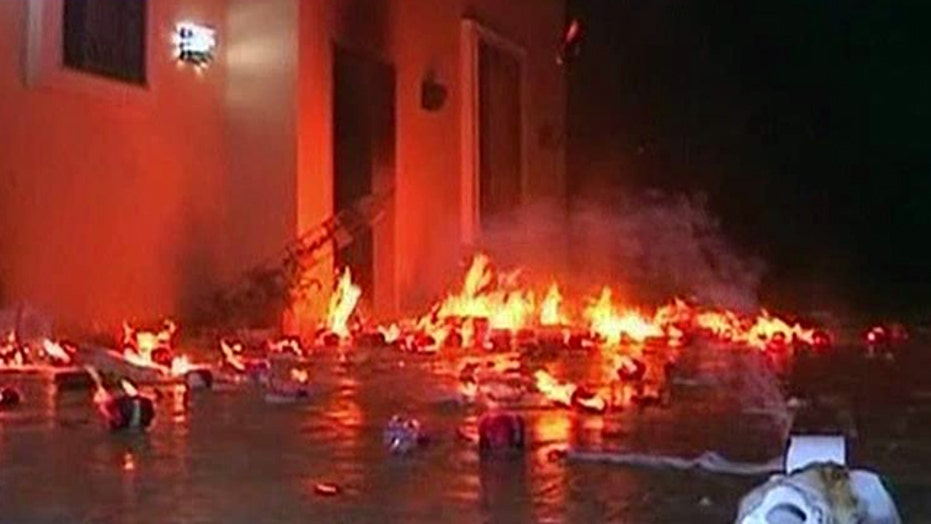 How the new Benghazi e-mails are a game changer

This is a rush transcript from "The Kelly File," April 30, 2014. This copy may not be in its final form and may be updated.

Welcome to "The Kelly File" everybody. I'm Martha MacCallum in tonight for Megyn. So, the first e-mail involves events on September the 11th, 2012, with the elections just weeks away, four Americans die in a vicious attack on our consulate in Benghazi. In the days that follow, the administration repeatedly plays up the story that it was a video that sparked this string of spontaneous protests across the Middle East, and plays down the idea that it was any sort of well-planned terror attack.

Now, thanks to an e-mail that just surfaced today, we now know how the White House political team drove that narrative. Just two days later on the 13th of September, 2012, media outlets including Fox were reporting on protests in Cairo at the embassy there. There were also reports Benghazi had been a coordinated attack and what turned out to be false reports from the independent suggesting that our government was warned of those diplomatic posts that they could be targeted.

Now, that very night, there is an e-mail exchange between an Associated Press reporter and then State Department spokesman Victoria Nuland and an unidentified person discussing the reporting and the nature of this story. So Nuland writes to the Associated Press' Matthew Lee about this story saying, "Bs all over this. Don't quote. The director of National Intelligence is batting this down." Lee replies to Nuland, "I know it's bs but this is killing you guys, been watching Fox News tonight and the amount of misinformation, disinformation including repeated references to this Guardian Story," he meant the Independent by the way, "is frankly shocking," he says. "Shocking even for an election year." And this is an AP reporter speaking to the State Department in the midst of this crisis.

Nuland responds, "We're on it, blasting our counter out now. DNI is sending his line to your Intel correspondent." Lee writes back to Nuland, "OK the utter bs is being spread around on Fox and I assume other allies including the Guardian," he meant the Independent, "is really unbelievable," says this reporter. "I think you know or should know that I'm not a fan of any particular administration or policy and I'm not shy about calling out inconsistencies but this is shocking," he writes. Nuland responds, "Mike Allen piece on Drudge now rebutting."

All right. So what have we learned from this exchange here?

Brent Bozell is the president of the Media Research Center. Andrew McCarthy is a former federal prosecutor and National Review contributing editor and we begin with Brent. Brent, what do we learn from this?

BRENT BOZELL, MEDIA RESEARCH CENTER PRESIDENT: Well, what we learn is that a reporter during the Obama administration and Obama administration official are indistinguishable. If you close your eyes, and you hear this watch listed -- going back and forth, they both sound like political operatives, which is what they were. The media's role is supposed to be a watchdog on power, and what you've got in the Obama years is a press that is blatantly supporting this administration and blatantly taking the side and becoming the mouthpiece for this administration. It doesn't matter whether that story was true or not, what matters in this case is that this reporter from the AP immediately took administration's position and immediately wanted to go after Fox because of a dislike for the Fox News.

MACCALLUM: You know, we looked because of this, we went back and said what was being said that night on Fox that he is calling utter bs? And, you know, going back over it, there wasn't a whole lot to be honest, but there was some coverage that night on O'Reilly. O'Reilly said that it was likely a coordinated attack in his opinion. He said that the film was being used as an excuse, both of which have turned out to be true. Laura Ingraham raised the question that night, where was the President during this attack? We still don't know the answer to that. But, you know, you go through this and it's really hard to find out what was so inflammatory to be called utter bs by this reporter --

BOZELL: Well, if you look at the e-mail string, they happen between 9:19 and 9:57, that was during the O'Reilly show. What O'Reilly was saying in that show to Laura Ingram, is that the video story, excuse, is not going to sale. This was a coordinated attack. Now somehow that became something irrational that had to be disputed. But it's important to note that this reporter from the AP did not know what Bill O'Reilly was saying was untrue. He simply accepted that it was untrue because the White House thought it was untrue.

MACCALLUM: Right. You know, but on the other hand, you know, as a reporter you look at this, you say, it's not unusual to try to sort of, you know, warm up to your source so that when they do start to have more details, they're going to say look, we can trust this guy. You know, he's written, reported on this accurately. Let's go back to him when we get more details. You know, is this an example of that or is it something more in your opinion?

But the other part of what he was saying was that it was well-orchestrated and that it was, you know, done by a team of militants who knew what they were doing and carried out the attack. So, that part of the Independent report which he refers to as a Guardian was actually accurate, but you're right, he hopped immediately and called it utter bs.

MACCALLUM: All right. Brent Bozell, thank you very much. Good to have you here tonight.

MACCALLUM: So now, let's go to that other document that you've heard a lot about, despite the lot of claims that have been to the contrary, a newly released e-mails that was obtained by judicial watch now show that the White House played a central role in prepping former UN Ambassador Susan Rice as she played down the possibility of a Benghazi terror attack with the president -- with the election just weeks away.

Now on Friday, September 14th, just three days after this attack on our consulate, the White House's Ben Rhodes reveals the goals of the interview for Susan Rice that's coming that weekend. Among other things, he says, "To underscore that these protests are rooted in an internet video and not a broader failure of policy," and, "To reinforce the president and administration strength and steadiness in dealing with difficult challenges."

But remember, Press Secretary Jay Carney suggested that the White House's involvement in this was minimal.

UNIDENTIFIED MAN: Changed because of objections...

MACCALLUM: So given what we now know about an e-mail of the White House tried to keep from Congress through the course of five hearings that were held and numerous requests for documents, was the White House's role in all of this really minimal and non-substantive?

Let's bring in Andrew McCarthy on this. Andrew, welcome. Good to have you here tonight. We just watched that exchange with Jay Carney. But I want to also play a little bit of something that has really made the rounds today, which was an eight-minute back and forth between Carney and Jonathan Karl from ABC News. Let's just listen to little piece of that and I'll get your thoughts on it.

JONATHAN KARL, ABC NEWS: Why did it take a court case for you to release this?

KARL: It was her prep for the Sunday shows

CARNEY: It wasn't her only prep, John. She relied for her answers on Benghazi, on the document prepared by the CIA, as did members of Congress.

ANDREW MCCARTHY, FORMER FEDERAL PROSECUTOR: Of all the insults to the intelligence that we've heard from that podium, that may be the worst one in five or six years, however long it's been. Anyone who's been involved in government where they are going to make a presentation, whether it's to the press or a court or to a Congress, knows that they do kind of a murder board, a prep hearing, and for him to say that it had nothing to do with Benghazi when the only reason Rice was chosen in the first place to be given to the nation-wide television shows to appear on Sunday, and the only reason she was actually appearing was because of the Benghazi massacre. Had that not happened, she would not have been offered and those TV programs would never --

MACCALLUM: I mean, there was, you know, coverage of what was going on across the Middle East, that there was Tunisia, dustup, more than that really, and also in Cairo, the breaching of the embassy walls there. So, he's trying to say, you know, this was the sort of the larger picture that we were concerned with. But, you know, you're right, that Benghazi was clearly the hottest -- four people lost their lives in that situation. So, you know, when you look at the fact that judicial watch, took judicial watch and Democrats scream from the rafters, that you know, there have been five hearings on this, we've had numerous documents that have been turned over, enough, let it go. But when they got their hands on the real documents and they looked at the un-redacted, this is what was in that.

MCCARTHY: Right, because a lawyer can prosecute an actual case to try to get to the bottom of what actually happened where as five different Congressional committees all coming at it from the prism of their different jurisdiction or responsibilities are not equipped to conduct what needs to be conducted here, which is something like a criminal investigation. And if the Justice Department won't do it, they obviously won't, it's got to be done by a select committee with subpoena power and with some prosecutorial discretion. Otherwise, they maybe --

MACCALLUM: You think John Boehner will call for that now? He's being pressured too.

MCCARTHY: I don't understand why he hasn't called for it already. If he doesn't do it now, it's inexplicable.

MACCALLUM: And you also claim that even Egypt, really had nothing to do with this video.

MCCARTHY: The video is a fraud through and through. The video never had anything to do with Benghazi and it's unfortunate the people have accepted that it had something to do with Cairo. We knew before the Cairo embassy, what they called protests, what was actually violent rioting, happened on the circumstances of where Al Qaeda elements were threatening the embassy for weeks to try to get actually the freedom of the guy I prosecuted in the '90s, the Blind Sheik, which is a big deal in Egypt.

That's what was mainly going on in Egypt. The video thing was a side show. The State Department put out these tweets to try to spin the trouble in Cairo as attributable to the video, but actually, it was al-Qaeda elements, but if they had admitted that then it would have been clear that the president --

MACCALLUM: No video could ignite something that doesn't have these embers already burning all around the place underneath it, for that match to light it. There has to be an underlying policy issue.