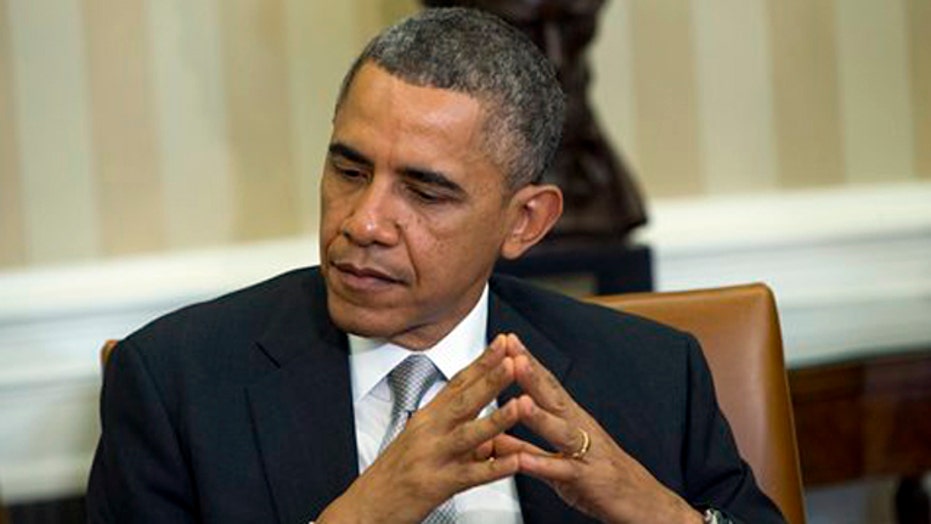 How President Obama is defying the Constitution

This is a rush transcript from "Hannity," December 3, 2013. This copy may not be in its final form and may be updated.

SEAN HANNITY, HOST: And welcome back to "Hannity." Now, earlier today, the House Judiciary Committee held a hearing and dissected all the ways the administration is overreaching its constitutional authority, and here are some of the highlights.

UNIDENTIFIED MALE: The center of gravity is shifting, and that makes it unstable. And within that system, you have the rise of an uber- presidency. There could be no greater danger for individual liberty. And I really think that the framers would be horrified by that shift, because everything they dedicated themselves to was creating this orbital balance, and we've lost it.

UNIDENTIFIED MALE: As I've said before, I think the ultimate check is elections. But you know, I don't think you should be hesitant to speak the word in this room. A check on executive lawlessness is impeachment.

UNIDENTIFIED MALE: If the people come to believe that the government is no longer constrained by the laws, then they will conclude that neither are they. That is why this is a very, very dangerous sort of thing for the president to do, to wantonly ignore the laws, to try to impose obligations on people that the legislature did not approve.

HANNITY: Joining me now, two lawmakers who were in the same room earlier today, Republican Congressmen Steve King and Blake Farenthold is with us.

Congressman King, my good friend Mark Levin wrote a good book about this, and he said we're in a post-constitutional America. Can you just list for our audience the ways in which you think that this president has overstepped his constitutional authority?

REP. STEVE KING, R-IOWA: Well, I can in some of them. And for example, on immigration law -- we call it the Morton memos -- the president has ordered ICE not to enforce clear immigration law and then made up work permits out of thin air. There are about five different violations, constitutional violations there.

Under ObamaCare, some discussion today, he extended the employer mandate for a year, even though the law says "shall commence in each month after December of 2013." He extended the individual mandate, stretched that out, and now the small package plans. There's at least three times that he's violated the Constitution with ObamaCare.

He declared the Senate to not be in session to make his recess appointments, when the Senate was actually in pro forma sessions, and the Constitution says that the Senate shall make its own rules.

That's just some of the violations that we have. It is a long list from this president, an uber-president with no respect or little respect for the Constitution itself, Sean.

HANNITY: All right, so you have a president that is rewriting laws to -- at a whim, and he's not using the traditional historical checks and balances and separation of powers. And then he's rewriting laws and he's not enforcing other laws. And as you point out, he just decides, "Well, I don't care whether you're in session or not, I'm going to go ahead and make a recess appointment."

Congressman, what do you think? What are your thoughts? Any other areas you think of?

REP. BLAKE FARENTHOLD, R-TEXAS: Well, listen, the "take care" clause requires the president to faithfully execute all the laws. It's established principle of constitutional law, back from the days of Marbury versus Madison in the 1800s.

The president's a constitutional law scholar. He should know this. But he's grabbing as much power as he can. And unfortunately, we're letting him do it in Congress. As one of the witnesses pointed out, this isn't a Republican or a Democrat issue.

Regardless of which party is in power in the White House and in Congress, the founding fathers intended for Congress to have certain powers. And President Obama is taking way more than the Constitution allows, and we have got to do what we can to stop him. Unfortunately, we don't have a lot of options at our disposal.

HANNITY: Well, let's talk about the remedies, because one of the witnesses mentioned impeachment. I don't think any of us think that's going to happen. Are there any other legal remedies, the courts perhaps, Congressman King?

KING: Well, if we go to the courts, Sean, and we did initiate a lawsuit on immigration issue a year ago last summer. We worked our way through the courts and the northern district of Texas found in our favor, the constitution's, and the people's favor in nine out of 10 points. Then it got slid into an administrative decision for ICE to appeal to. It is hard to go to the court to get standing in the first place to be able to have your case heard and to be able to establish a cause of action.

Then we also have the power of the purse, but Congress tried that power of the purse. We went through a government shutdown. The appetite for that is almost nonexistent in this Congress today, and I think the president knows that, and I think he is exploiting that. I just got the news last night that they have threatened a several hundred million dollar fine against the last company that was smelting led for bullets in America, now they're shut down.

HANNITY: Congressman, you know there is no appetite for that.

HANNITY: All right, guys, good to see you both, appreciate it.