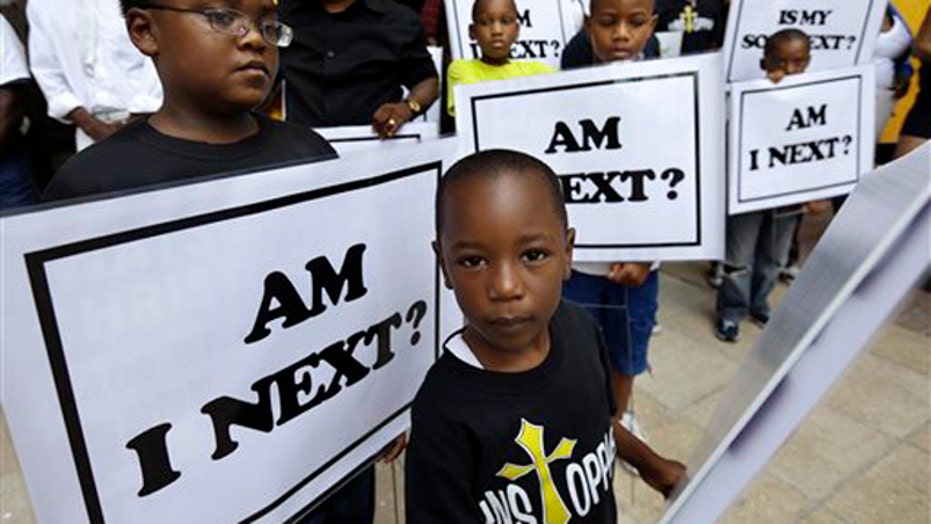 How Ferguson sheds light on the racial divide in America

Studio audience debates the shooting of an unarmed teen

This is a rush transcript from "Hannity," August 22, 2014. This copy may not be in its final form and may be updated.

SEAN HANNITY, HOST: And welcome back to this audience edition of "Hannity" as we examine the racial divide in America in the wake of the shooting of Michael Brown. Now, it has been well over a week since the teenager was shot and killed by a Ferguson police officer. And since that fateful day, we have seen people from the president and beyond weighing in on this tragedy.  Let's take a look.

REV. AL SHARPTON, NATIONAL ACTION NETWORK: How can the young folk of the city believe in a system that would try to spit on the name and character of a young man who hasn't even been buried?

HANNITY: So are those comments helping or hurting the community of Ferguson and beyond? We go back to our studio audience.

Rod Wheeler, you've been around law enforcement a long time. Do those comments help, do they hurt?

ROD WHEELER, FMR. D.C. HOMICIDE DETECTIVE: You know, those comments did not help at all. And the reason I can tell you this, Sean, is because, you know, last Friday night, I was there in Ferguson, in the middle of the riots. And I spoke with all the people that we're talking about that was doing the rioting, and I was asking them -- and I asked them one specific question. I said, If President Obama is watching this show right now -- because I was interviewing them -- what would you say to him? This is what I asked the same guys that was out there rioting.

So the shooting of Mike Brown is more than just the shooting of Mike Brown. It's about what's going on in America, even right here in New York.  And don't fool yourself. Don't kid yourself. What happened in Ferguson can happen any day. And I'm sure some of the panel will agree with me, can happen any day in any city in America.

HANNITY: See, I agree with you. And I would argue, Kevin, that a lot of this is socioeconomic. In other words, when you have an economy where 50 million Americans are on food stamps, 100 million Americans on welfare in some shape, manner or form, the lowest labor participation rate, and in the black community, black teenagers can't get summer jobs, some 60 percent of them, well, that means they're hanging out with their friends!

KEVIN JACKSON, THE BLACK SPHERE: Yes, I want to echo what Rod said. First of all, I was there, I don't remember which day because I've been there three or four days, but one of the days, they were saying "F" Obama, "F" Sharpton, to talk about what he was saying...

HANNITY: So they're having no impact. They're hurting.

JACKSON: Zero impact. Nobody cared. And it's exactly the same reasons. And in fact, a lot of these kids were thinking of the looting as sort of getting back, you know, something that they weren't provided by the nation. So they looked at it as, like, Hey, it's, you know, shopping.

HANNITY: Here's -- let me go to Joe. Joe works for Mediaite, a website that hates me.

HANNITY: They use my name just to get all the liberals to say I'm dumb and stupid and every other comment. But with that said, welcome to the program.

HANNITY: Let's talk about the media aspect of this. Al Sharpton's a host on NBC News (sic) right?

CONCHA: Sean, there are two aspects to television news these days.  There is first the less important aspect, which is the business side. And in this case, you're not getting an ROI, return on investment, on Al Sharpton being there. Look at the audience numbers. He gets beat by CNN in his timeslot, by -- and this is the latest report from yesterday -- two to 1. He gets beat by Bret Baier six to one. So it's not like -- he's injected himself into the story...

CONCHA: He's injected himself in the story, and you're still not getting any kind of ratings bump. More importantly, you got to look at integrity, all right? So every host's job is to present two sides of every story and let the audience come to their own conclusions...

HANNITY: You know, when you're being hit with Molotov cocktails, rocks and gunfire, I think our cops need to be protected. I think they need every bit of that equipment. Am I wrong?

GILLIAM: Well, you're not wrong. But when we speak of the militarization of law enforcement, what we're really talking about is militarization of a very small group of police. The rest of the police are really being taught learned helplessness. They're not allowed to do warrants anymore, drug seizures, certain types of arrests, and they're getting less and less training while SWAT is getting more equipment and more training.

And Mr. Wheeler hit on something that's excellent here. But I don't think that this is a black/white issue. What I think what we're having here is a -- because it could happen anywhere. We're having a lack of preparedness issue. These problems can be solved way before they happen.  You know, somebody like Jesse Jackson or Al Sharpton coming up there, they just throw fire on that -- or gas on that flame. If we as leaders in the communities could actually start looking at this way before, it's the same as if we trained all law enforcement.

HANNITY: I agree. That's the whole -- the whole concept behind community policing.

JASON RILEY, FOX NEWS CONTRIBUTOR: He is from Chicago, but Jesse Jackson's got a different agenda, and that agenda is to blame whites for what's going on with blacks. And Chicago doesn't further that agenda, so Jesse's out making hay about white-on-black violence, so to speak, instead of black-on- black violence.

RILEY: Which I appreciate, but you're not going to get your own show...

RILEY: No, but my point is that the media continues to go back to the same individuals to speak on behalf of the black community. They're helping make the problem worse by continuing to run to the Al Sharptons and the Jesse Jacksons...

RILEY: ... to speak on behalf of blacks.

HANNITY: ... you're raising a great point. One of the reasons I started doing these audience shows is because of the woman right behind you. And one day, me, Deneen and her husband had a conversation about the treatment of black conservatives in America. I think it was some of the best shows we've ever done because you can say anything you want about a black conservative. You can call him any name, Uncle Tom, traitor, sellout, and it's acceptable in a politically correct society.

What's your take on all this?

DENEEN BORELLI, FOX NEWS CONTRIBUTOR: You're absolutely right. And the other point I wanted to make is in regards to the media because if you're getting your news from the same source in regards to black individuals, there's a message of victimization throughout the black community that is portrayed from Jesse Jackson, Al Sharpton, Eric Holder. It's the same message that is resonating over and over again.

If you're not getting your resources or information elsewhere, this is the mindset of individuals. And they believe they're victims, Sean. And the least little thing that happens, it's someone else's fault, not my fault. And it's a me versus them mentality. I've seen it on the news, NAACP. It's the same message.

HANNITY: You know, my Christian belief teaches me this, and it may shock you that I went to a seminary. The word education from the Latin, ''educare,'' to bring forth from within. What does that presuppose? It's predicated on a belief that God has given every man, woman and child talent. It's our job to bring it out of them. It's already there. We're failing these kids. And we are not serving them well.