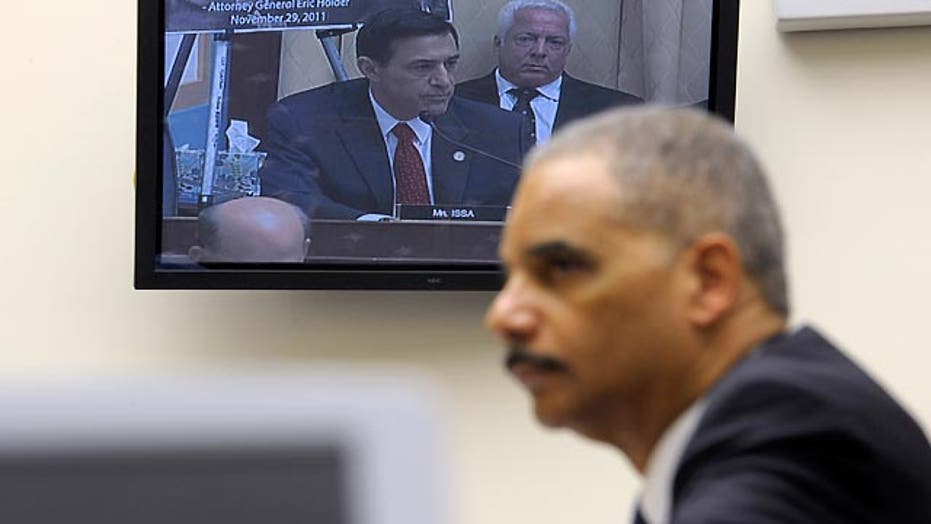 Holder on the Hot Seat Over Fast & Furious

This is a rush transcript from "Hannity," December 8, 2011. This copy may not be in its final form and may be updated.

SEAN HANNITY, HOST: There were fireworks on Capitol Hill today as U.S. Attorney General Eric Holder faced off with members of the House Judiciary Committee over operation Fast and Furious. Let's take a look.

I have treated this attorney general as a hostile witness because ultimately when he comes before us saying he's going to clean house, no house has been cleaned.

REP. TED POE, R-TEXAS: Would you agree this operation was reckless? It was a reckless operation on the part of the United States?

ERIC HOLDER, DEPUTY ATTORNEY GENERAL: I think the way it was carried out, you know, I would certainly say, it was flawed, reckless, yes, I would probably agree with that.

REP. JASON CHAFFETZ, R-UTAH: You have routinely argued that you have been oblivious and disengaged in this operation, and I buy that.

HOLDER: The notion that I am somehow oblivious to this matter is totally belied by these inconvenient things called the facts.

HANNITY: And joining me now for his first interview since participating in today's hearing is the chairman of the House Oversight Committee, that's California Congressman Darrell Issa. Congressman, welcome back, sir.

ISSA: Well, thanks for having me back. And thanks for your wall-to-wall coverage on this. Over long period of time that we've been blocked by the attorney general and his minions from getting the truth to the American people, except for people like yourself.

HANNITY: What's fascinating to me, it was very Clintonesque today when he said, oh, a lie is about intentions. Because you caught him in lies, is that not true?

ISSA: Absolutely. And Ben Quayle did a great job of also making it clear that although he says he's willing to sort of clean house, hold people accountable, he started talking about looking at an entire career, not this just one action, as though Brian Terry's life is not grounds for dismissal, as though allowing weapons to get in the hands of the worst of the worst is not grounds for dismissal. He's even back stepping from firing people at the center of this controversy.

HANNITY: Yes. Well, correct me if I'm wrong, Congressman, Roger Clemens went before Congress and he lied and he's now, has a trial upcoming, is that not true?

ISSA: Absolutely, and even Scooter Libby, who said he didn't remember something was the grounds for the chief of staff to the Vice President Cheney ending up on losing his bar license and obviously going to jail. This attorney general is conveniently not remembering a lot of things or remembering that a week and a month are somehow the same amount of time.

ISSA: Well, they are not only not forthcoming, but today the attorney general made it clear, he's not giving us all the documents our subpoena asks for. He selectively gave us the ones I guess that he thought, quote, "fits this narrow exception" that he thinks is somehow in the law. And, you know, this was very Nixonesque or, you know, we could go through all the president's men, but he made the point that somehow they have this practice of not giving, while not sighting any constitutional privilege or executive privilege. He is simply not going to give us things which go to the very question of who knew, who approved in his office, you know, below him. He certainly is not going to give us answers to when he told the president about it, even though, you know, the president says, he didn't know anything about it and now it turns out he did. The president says he has confidence, full confidence in the attorney general, and he's probably the last man left on earth that does.

HANNITY: All right. You are treating him as a hostile witness. You caught him in lies. Can you explain to everybody specifically what these lies are? And are there going to be any consequences to an attorney general lying to Congress?

ISSA: Well, one of the unfortunate problems is we have to refer to the Justice Department for prosecution.

ISSA: But, yes, well, look, the American people are going to hold the attorney general responsible. There will be a housecleaning either between now and the election or certainly one after the election. But what we are going to continue doing, we are deposing witnesses in the days to come, finishing our evidence trail and we are going to send the package up and expect the president to respond to what is a clear process of mostly political appointees knowingly let this happen. And one thing that came out very clear today, Sean, is that there is a Rahm Emanuel moment that is pretty obvious, that when this disaster was happening, they decided to be opportunist and use it to expand the gun database that they are now executing by their won regulations in four states and asking Congress to expand nationally. Very clearly, they made a crisis and they are using this crisis to somehow take away or limit people's second amendment rights.

HANNITY: Well, that's the amazing thing, as the attorney general said today that this very thing that he once bragged about is now going to fuel a crime wave for years to come. Now, if that in and of itself is not an admission. And that of course, "Lying is just an intention, I didn't intentionally lie it just depends on my motivation about lying, but I lied to you but my heart was in the right place." I can't imagine that flying in a court of law or before a grand jury.

ISSA: Well, absolutely. And of course, he resisted being sworn in today, which would limit the perjury question as to his own false testimony. But you know, one of the other things he said straight up is no one lied to Congress and no one lied in that letter that came to us that's had to be withdrawn because it was factually incorrect. It's just not true and the very e-mails that we have show that. And more importantly, whistle-blowers are coming forward. They are printing out over at Justice various e-mails and other documents and they are starting to get us to our committee because they realize that what is being withheld is simply wrong.

HANNITY: Congressman, keep up the good work. We'll continue to follow the story.

HANNITY: A lot of the mainstream media has ignored it. And thanks for being with us.