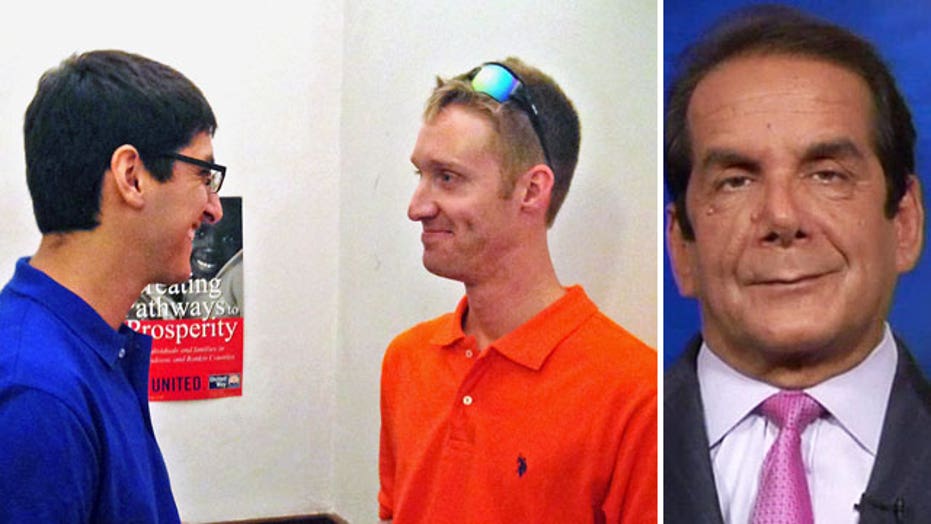 How America is changing

O'REILLY: Figuring out now that lead story how America is changing, we have Charles Krauthammer having come up with three -- three, I got it -- there major reasons the USA is going over to this (inaudible) joins us now from Washington.

And before we get to that, any quibbles with my memo?

CHARLES KRAUTHAMMER, SYNDICATED COLUMNIST: No, I think the basic point is right, clicking on the gay marriage decision.

This is a recapitulation of what happened 40 years ago with the abortion decision. You can disagree or agree with the policy itself, but the fact is they went completely outside the constitution. And it's not so much that they created it right, is that by issuing the decree, in this case, to legalize gay marriage everywhere as in the abortion case. It took the issue out of the political arena, meaning that the people either express through referenda or through their legislatures can no longer pronounce themselves on the issue.

Ruth Bader Ginsburg who, ironically, was one of those who ruled for gay marriage. She said before she has sent it (ph) to the Supreme Court as a criticism of the abortion decision that it prevented a stable social settlement of the abortion issue which at that time was headed and they reform direction, which is exactly what was happening with gay marriage, and yet the Supreme Court steps in while the country is moving on an issue, making a decision state by state, democratically the way the constitution wanted it and says no more debate, no more decisions. Whatever you've -- whatever laws you have or state constitutions you have, they are invalid. We decide the law of the land.

O'REILLY: But that's not what the constitution says. It's clearly a delineation of the three branches of government. Supreme Court is not supposed to make law, and they are. But here is the -- this is even .

O'REILLY: Yeah, this is even worst. This is even worst. They got two justices who perform gay marriages. These judges in this country can, and then they vote on (ph). That's a farce. They should have recuse themselves and look, you know, "We perform these marriages, we believe in gay marriage, but we know that the court has to look at it in at somewhat objective way and evaluate both sides of the story. We're in capable of doing that because we've already thrown into it. So we're going to recuse." That would have been the honest thing to do.

KRAUTHAMMER: But the issue is -- and even the policy -- the chief justice dissent indicated that, you know, on the policy had he beaten state legislature, he pretty might have supported gaybies (ph) or gay marriage. But he says it's not our job .

O'REILLY: Yeah, this is.

KRAUTHAMMER: Our job is to decide what's constitutional and to decide whether anybody else can decide. And he said that's not what we should have done in this case.

O'REILLY: And these guys know it, that's the thing. That's what really troubles me. Each of these nine Supreme Court justices know they're not doing what they are compelled to do by the constitution, they're not.

OK, three reasons why America is heading for a secular paradise. Number one?

KRAUTHAMMER: You try to get me into a Rick Perry situation here? Number one is Charles Darwin. And this is been a secular -- the secularization of the West is as phenomenon at least 150 years old and the main reason is the rise of Science. We could spend a whole hour on that but it's happened everywhere.

The remarkable story about America is that we are the least secularized. The pews in the churches in Britain and France, Italy are empty. They are not empty in America. So that's an interesting for. We had become more secular without a doubt, but nowhere near where the rest of the West is.

O'REILLY: No. But the science has not been able to prove the existence of any kind of force that would create the universe other than a DNA (ph). They have not.

KRAUTHAMMER: I mean, look -- But that's not the point. The point is, whether logical or not or whether you can produce an argument or not, it is a fact that the secularization of the West is a direct result of the rise of science and you might say the narrowing of the areas of ignorance and uncertainty that we had for centuries.

O'REILLY: I only have a minute left so .

KRAUTHAMMER: Whether or not is justified or not as a separate issue.

O'REILLY: I only have a minute so .

KRAUTHAMMER: . but it's a sociological fact.

KRAUTHAMMER: Number two is that the left -- the second or left realizing it wasn't going to win on politics decided to march through the cultural institutions, the universities, the media, Hollywood. And number three, the reason that's important is young people no longer are raised by their parents. They get outside influenced through their ears, through the internet, on television has never before in human history, 68 hours a day, the left controls the culture and the culture, in the end, drives the politics.

O'REILLY: And the parents have abdicated their child rearing responsibilities.

KRAUTHAMMER: Well, abdicated or not, they cannot resist the influence of the culture because of the technology for no other reason.

O'REILLY: All right, Charles Krauthammer everybody.