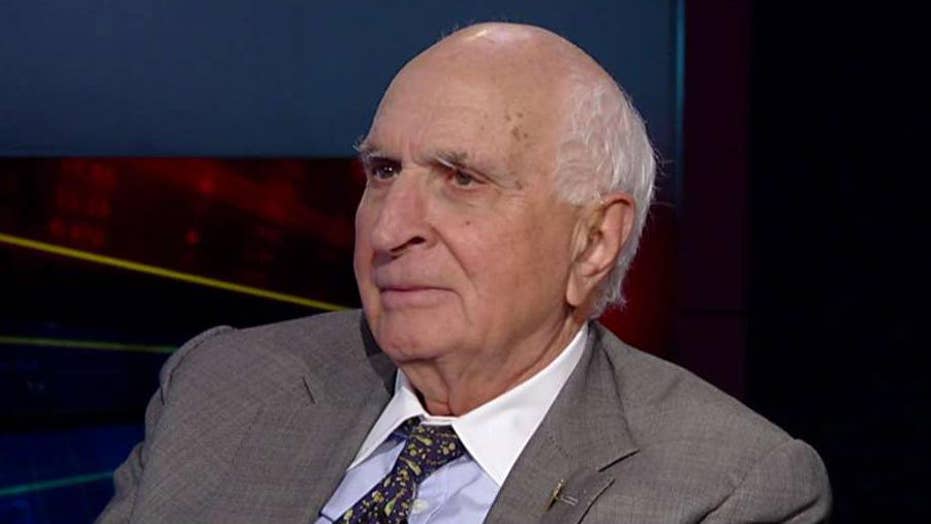 This is a rush transcript from "Your World," December 7, 2017. This copy may not be in its final form and may be updated.

NEIL CAVUTO, "YOUR WORLD" HOST: All right, that meeting is still going on at the White House, the president with the Republican and Democratic leadership, including Speaker Ryan.

They are there with Nancy Pelosi. Have they left? Or what is it, Pam?

Of course, that is Chuck Schumer and Nancy Pelosi leaving earlier today.

So, the Republicans, Speaker Ryan and Mitch McConnell, I would assume, right, Pam?

OK. She just dismisses me like that and says, yes, just that that's what I told you before.

All right, what I do remember, before them coming out, is that I have got Home Depot Ken Langone here, the billionaire co-founder of that great, great, great establishment.

What do you make of this talk to shut down or avoid shutting down the government? And the way they're going to do it is a two-week temporary measure.

KEN LANGONE, CO-FOUNDER, HOME DEPOT: It's a game. OK? They're not going to shut the government down. They know it and we know it. It would be foolish and it would be a black eye for the Republican Party.

CAVUTO: But it's kind of weird that this is the best they can cobble together, two weeks at a plan.

LANGONE: Yes, because they're all -- they're playing a game of chicken with each other.

LANGONE: These people ought to be in Hollywood. They're better actors than they are legislators.

LANGONE: I'm serious. I mean, come on, stop playing with the American people's head. Go down there and get your job done.

CAVUTO: All right, part of the job getting done on tax cuts...

CAVUTO: ... that the reason why they're linked to this spending thing is, a lot of deals and transactions were closed to make sure the tax cut vote comes a certain way by concessions made on the budget, more defense spending that would satisfy John McCain, presumably, more assurances for people who are afraid their premiums might go up for Susan Collins of Maine.

So, that's why they're linked. What do you think of all that, the deal- making?

LANGONE: Order of priority for me, the little guy. Make sure he gets a tax cut.

CAVUTO: Do you think he or she is in this?

I don't think we're going to know until -- like Nancy Pelosi said about the Affordable Care Act, you won't know it when you read it. We have to do something about income inequality in America. I should pay more taxes. I can afford to. Nothing in my life will change.

CAVUTO: Yes, but you're a billionaire. You're different than other people.

LANGONE: But if I wasn't a billionaire, and I had...

CAVUTO: Where do you draw the line at where -- people who should pay more?
Just an arbitrary figure?

LANGONE: That is tough.

I know this much, that if we don't do something about income inequality in America, we're playing with danger, big time. We have got to close the gap. We have got to...

CAVUTO: Do you do that by forcibly changes rates or recognize the fact that guys like you are disproportionately paying the taxes?

LANGONE: I pay a lot of taxes. Guess what? I did pretty good.

LANGONE: And so you know what?

CAVUTO: But so you're not worried that -- when you started Home Depot, I mean, we had everyone kind of kicking in to pay income taxes.

CAVUTO: Hear me out.

And now, now the top 1 percent are paying more than 30 percent of the bill. And you know that, that it's got to be more spread out.

Look, you can't get blood from a rock. These people...

CAVUTO: You can get something, though, right?

LANGONE: Well, these people that are struggling to make ends meet, you can't take anything from them.

But we're missing something in this whole thing about income inequality. What about education? What about preparing these kids? I think there's 60,000 or 80,000 jobs in this city right now that are going crying, $80,000-a-year incomes. But the kids are not qualified to do the work.

Why? Because they're not getting quality educations.

CAVUTO: We throw a lot of money at education.

LANGONE: Oh, we're number one. Of the 30 nations on Earth, we spend more money per student than any other -- the 30 most developed nations.

LANGONE: Look, Neil, I don't want to pay any more taxes. I would prefer not to, but I'm a realist.

I understand I live in a society where stability is very important.

CAVUTO: I know. But that stability is built on fewer and fewer paying it.

I'm not condoning the rich or saying that they're getting -- should be pacified here. But I'm saying that that math can't continue, right? That can't, where you depend on fewer and fewer to pay more and more. Even after this tax cut, we will have half, more than half the people in this country not paying any income tax.

I'm not minimizes payroll taxes, other taxes. It's very real to the people who pay them. But the fact of the matter is, that's a shrinking base of people paying, and it's going to shrink more after these taxes.

On the other hand, take the carried interest.

CAVUTO: So, that should be just treated as such?

LANGONE: And what bothers -- what bothers me is -- and I don't mean to cast aspersions on anybody. But their -- the added income from the pass- through, their added income is in the abstract. They don't need it.

CAVUTO: You think they're getting away with a lot?

LANGONE: I don't think they're getting away with a lot, but they ought to fight over things that matter.

I think, for example, for us to be competitive on a global stage in income taxes for corporations, absolute must. Why? The companies overseas are buying our American companies and moving the stuff over there.

CAVUTO: Well, what about these companies that have now been incentivized in this plan, supposedly, to bring that money back home?

CAVUTO: Let's say they just invest it in their stock.

Would Ken Langone be disappointed in that?

LANGONE: Because they should use it to grow their companies.

Look, number one, remember this. We live in a society. We're claiming we have had tepid growth for the last 10 years. OK? How do you get growth? You get growth by plant construction, by more employment.

I will give you something interesting to think about. Here's where I think they ought to be a little more entrepreneurial. Say to all those companies, here's the deal. You take 10 percent of the money you repatriate, and you have to buy a bond issued by the federal government used for infrastructure construction, for bridges, for roads.

LANGONE: See, well, look, you know, let me tell you about an entrepreneur.

We see things differently. We see the possibilities. We're perennial optimists. We say, not will it get better; it will get better. We need to start thinking out of the box.

CAVUTO: Is this tax plan out of the box or in the box?

LANGONE: I don't know. I know this much.

There are two dragons out there we better be worried about, the deficit and the federal debt. We're going to pay a hell of a price. We are -- at some point are going to be confronted with a serious economic recession. I don't know when. Two years, three years. Who knows?

We can't keep doing with what we're doing with 1 percent, 2 percent interest, OK? And look what is happening to the state pension funds. Why? No return.

Very quickly. We have got less than a minute. How is President Trump doing?

LANGONE: I'm inclined to watch what he does, period. I like a lot of the things he's doing. I love the people he's put around him. I love the deregulation.

We will be -- we were self-inflicting punishment on ourselves.

CAVUTO: Do you like what he's doing thus far?

LANGONE: I like that. The guys he has got around him, I'm really high on.

CAVUTO: What about him, real quickly, him, Donald Trump?

LANGONE: Who am I to judge him, OK? I know this much.

LANGONE: No. No. That was about other things.

Here's what I'm saying. I'm saying, watch what he does. Forget what he says.

LANGONE: Nice seeing you, my friend.

CAVUTO: OK. Thank you very much.

CAVUTO: Merry Christmas to you.

Where are you going? Just stay a little while here. Holy cow. I know you're a billionaire, and you can do what you want, but just chill already.

LANGONE: How do you know I'm a billionaire?

CAVUTO: I looked it up.

LANGONE: No, how do I know?