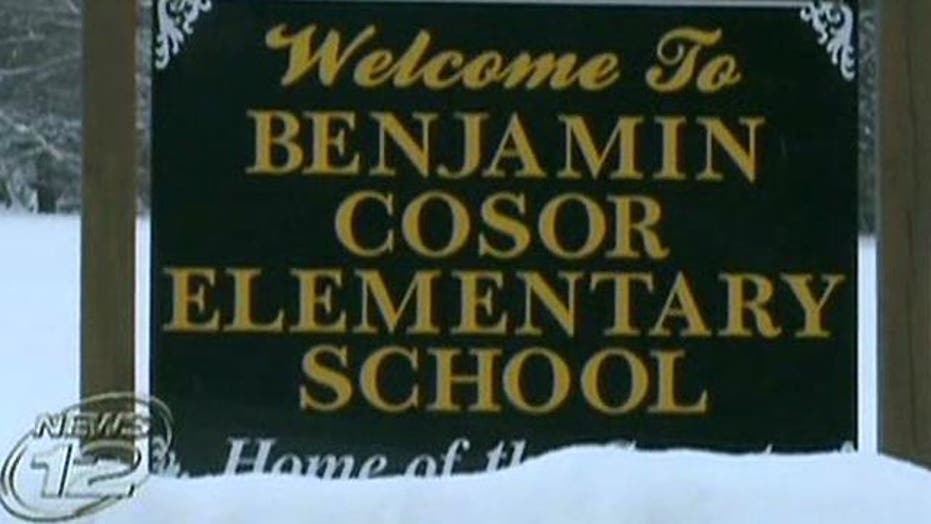 This is a rush transcript from "The Kelly File," February 21, 2014. This copy may not be in its final form and may be updated.

UNIDENTIFIED MAN: At this point in time, it is not a safe learning environment.

The union, I understand you have a contract to go by. You have got a bad drug addict teacher.

UNIDENTIFIED MAN: And it's nice and simple to publicly hanging people, isn't it, until --

UNIDENTIFIED MAN: No, it is ridiculous --

MEGYN KELLY, HOST: Well, those were angry parents sounding off at a board of education meeting in Fallsburg, New York, this week, after heroin and drug paraphernalia were found in a faculty bathroom at an elementary school not once, but twice since December. The parents were just told about it.

The superintendent just sent a letter to parents saying, quote, "An employee of the district found drugs and related paraphernalia in a school rest room." They failed to specify that the drug was heroin and that it was a faculty bathroom. And after the police narrowed the search to a small group of school employees, the Teacher's Union stepped in and pushed those teachers to stonewall the criminal probe.

Joining me now, Keith and Insley Unger, parents of three students at this elementary school, and Robert Hayword, whose son attends the school, as well. This is crazy. So, you found out, let me start with you Insley, you get this letter, it is so generic, they found the drugs and paraphernalia in a school rest room, we're looking into it. Then you found out how that they're about heroine, and a possible teacher.

INSLEY UNGER, KIDS GO TO SCHOOL WHERE HEROINE WAS FOUND: We did. And we actually found out about it all in the same day. The letter came home on Tuesday afternoon, we were sitting on the couch, we looked up and they're across the screen, said the Benjamin Cosor Elementary School. So, of course, we turn up the volume and listen to it.

KELLY: You have a six-year-old in this school.

KELLY: This is crazy, Rob, I know that you have a nine-year-old.

ROBERT HAYWORD, SON GOES TO SCHOOL WHERE HEROINE WAS FOUND: Yes, I do.

KELLY: And now, you have to worry because apparently these eight teachers originally agreed to give urine samples, but then the union step in and said, don't do that. And now none of them will, only the one non-union guy has done it, now the other seven are saying no, we're not doing it. Now you have to worry about whether a heroin user is teaching your nine-year-old.

HAYWORD: Absolutely. And that is the problem.

KELLY: And so, when you went to the school board meetings, did you get any satisfaction out of the superintended or anybody else?

HAYWORD: The only satisfaction I got, I realized that they were all liar over there.

KELLY: Why do you say that?

HAYWORD: Because the carefully edited speech, you could watch them following it, making no eye contact. That is the superintendent. The other guy, you could just see in his face as he is smiling. That is why I sat in the front row. I wanted to see the body expressions as well as pay attention to what they were telling me. They're carefully worded, just tried to appease us, they didn't make me feel comfortable that they provided a safe environment for my child. And I have a problem with that.

KELLY: And Keith, what do you think now? I mean, to send your kids to school, and I am sure I'm assuming you don't suspect their individual teachers, but who knows?

KEITH UNGER, KIDS GO TO SCHOOL WHERE HEROINE WAS FOUND: Right, and that is the issue. I transport kids for the school district. I have to take a drug test to put them on that bus I drive. I now have to send my three children to school and not know if it is their teacher? Or if their teacher is going to OD because he wants to shoot up in the bathroom.

KEITH UNGER: And it is scary.

KELLY: Yes, you think about what just happened with Philip Seymour Hoffman and, you know, the damage that heroin can cause, I mean, it can literally cost you your life. And there is a person who is apparently so in need of this drug in your children's school, that he or she, we assume that it's a he, is shooting it up in the bathroom. I mean, they can't even just do it at home, they have to do it in the bathroom, and so distracted by their behavior that not once but twice they left their paraphernalia behind, including needles. You used to work as an EMT (ph), right?

INSLEY UNGER: I still do. I have a current EMT license in the state of New York.

KELLY: You have seen what this drug can do. Do you have to worry now whether this is going to happen in front of your children?

INSLEY UNGER: It is scary enough to have a person who has either overdosed or who takes heroin in the back of an ambulance, but the thought of having them physically in the classroom as a teacher, as a one-on-one, as a janitor, as anybody, it is nerve-racking. These children have no idea what to look for, nor should they have to. I mean, you go to school to learn, not to sit here and question, OK, well, what happens if my teacher falls over, what happens if my teacher starts convulsing, what do I do?

KELLY: What if the teacher gets clean and goes through withdrawal in the middle of the classroom? There are so many things to worry about.

The school says, look, we contacted the police as soon as the first incident happened on December 23rd, and then another incident on Valentine's Day. There is a criminal probe, that's why we couldn't tell you right away. And these teachers, they have the right to be represented by the union and do what the union tells them, which they believe is, assert their due process rights, and that means, they don't have to give blood, they don't have to give urine, your thoughts on it?

HAYWORD: My thoughts on that? I thought it was totally wrong. I always assumed that teachers got drug tests because they're taking care of the children. Evidently I'm wrong on that one. And I think they should be drug tested. And if they have a problem with that, it is their problem.

KELLY: Yes. It would be nice to see those seven come forward and volunteer to take the test, in particular the ones who really have nothing to hide. Good to see you all. We'll continue to follow it.