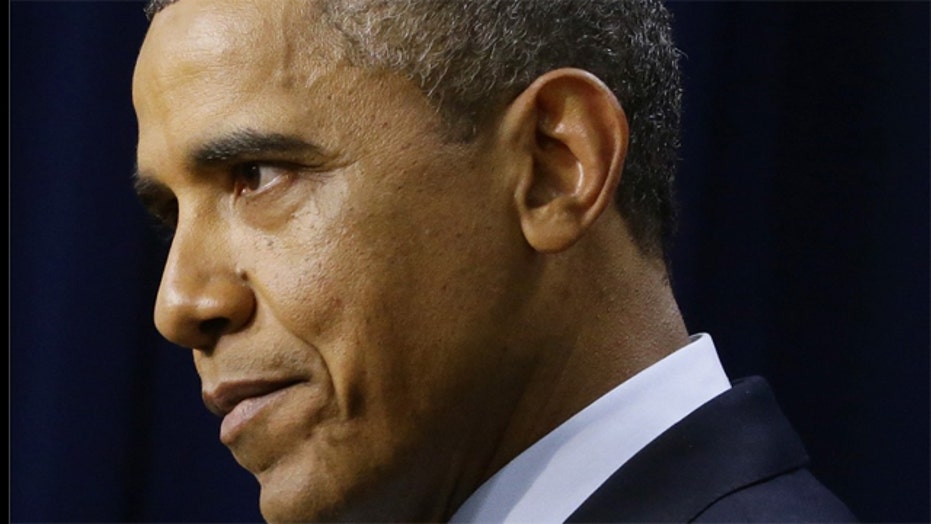 Has Obama expanded the welfare state?

PRESIDENT OBAMA: WE HAVE NOT MASSIVELY EXPANDED THE WELFARE STATE

MICHELLE FIELDS: He's not fooling anyone. All the existing entitlement programs have expanded. Did he forget he created ObamaCare, the biggest entitlement program? The CVO just came out with a report this week that shows that ObamaCare will lead to the reduction of 2 million jobs in America because of the subsidies. So Americans are realizing that it's actually a better deal to stay at home, be unemployed and live off Obama care subsidies and get food stamps and entitlement programs than go out and work. That is the America the president has created.

JONATHAN HOENIG: Absolutely scratching my head, Eric. I mean the president hasn't just expanded the welfare state. His whole philosophy is the welfare state, more specifically a state of force. Welfare is not compassion. It's not good will or charity. It's government force. It's taking money from people who have earned it and giving it to people who have not, and that of course has dramatically expanded, not just with Obama but under previous presidents as well. Back in the early '80s, about 30 percent got some sort of government welfare. It's nearly 50 percent now and it's exploded under President Obama.

JUAN WILLIAMS: This is so bizarre. This is like me being in the midst of Ebenezer Scrooge on the left, the right, all around. This is unbelievable You guys missed the idea that we had a tremendous recession in 2008, an economic disaster and it put a lot of people in economic jeopardy. You want to ignore it and talk about an entitlement president, a food stamp president.

WAYNE ROGERS: Obviously you can't argue with the facts, Eric. Welfare spending itself is up 16 percent. You talk about food stamps is up over 100 percent. And unemployment up 85 percent. By the way, Juan, just for the record, he's been there for five years now almost so you can't say this just happened -- you know, this just happened yesterday and this is George Bush's fault and he inherited this. He inherited some of it. Of course, he inherited some of it, but this is of his doing, he has not helped us one iota.

JONATHAN HOENIG: It's not just that we're the biggest super power but that we're the only super power. What makes a country super? If it were gold or oil, it would be Russia. It would Venezuela. It would be Cuba. But it's the country's ideas, not their natural resources that make it a success. It's the free countries that have always been the most prosperous. It's not surprising to see those disastrous conditions in Sochi. Russia ranks about 140 on heritage list of economic freedom. It's why the per capita income in Russia is $14,000 a year. That's considered poverty here in the still free U.S.

WAYNE ROGERS: I don't know that you can excuse it, but all totalitarian governments are like that. By the way, Sochi is a perfect example of something they're trying to build with. There was no bidding of this. There was no free market of this. Nobody incentivized to do a better job. Nobody going to get a pay raise. There's nobody that's going to get a prize for doing this better. As a consequence, what you have is a government enforced labor almost -- enforced labor camp to get this thing done as fast as possible. They don't care. They're a third world nation, as far as everything except for the military. You can see it every day if you've ever bun been to Russia. You will know. I spent a lot of time there, about five or six years ago. It was awful. You say you get a glass of water that looks like beer. Everything is like that. You're pulling teeth just to get the basics out of them.

JUAN WILLIAMS: Of course, we're the big dogs in super powers and we should be proud of it. Go USA. When I look over there and see what Putin is doing, I want to echo what Jonathan said. It's depression, totalitarian, the stance they're taking on our gay athletes, this is wretched. But the big point to me and the big disappointment in terms of the U.S., is NBC goes over there and sees dollar signs, so they're kissing up to Putin. I think that's reprehensible.

MICHELLE FIELDS: Those are the people that are going to be there. I think most of the people don't want to go to Sochi. It looks bad, they're hearing bad things and they're worried about security. This was Putin's big opportunity. He wanted to show the world that Russia was modern and wealthy. Instead what we've learned is it's corrupt, awful, miserable. He spent $50 billion for this Olympic event and a report came out in Russia that showed $30 billion of those went into the pockets of his associates and friends. Really Russia is the Soviet Union 2.0.

WAYNE ROGERS: I hope it's not that bad, Eric. That would scare me to death. It's technology. You can't stop technology. We have the same with the Internet and iPhones and all of that. Yes, there's going to be abuses with the credit information. Same thing could happen here. In the long run, this is a good thing.

JONATHAN HOENIG: Yeah, I don't know what Wayne is talking about. It's nothing like the Internet. Wayne, no one forced you to get on the Internet. No one forced to you get an iPhone, but that's exactly what this is.

JUAN WILLIAMS: I think that Wayne's right. I think we're going to have fewer accidents, fewer traffic jams. And my car's already a computer. If we can get people using their lipstick and their cell phones to act more responsibly. I'm all for it. They're already watching us through speeding lights, red light cameras. We're already under observation.

MICHELLE FIELDS: The government can't even create a health care website. You think I'm going to get on the road with a bunch of cars with some government communication system. Absolutely not. It's going to be a 200 million car pileup. And hackers have already proven that they can remotely tap into these systems. They can shut down the engine, turn it off and put the brakes on at high speed. No I'm not getting in that car.

WHAT DO I NEED TO KNOW