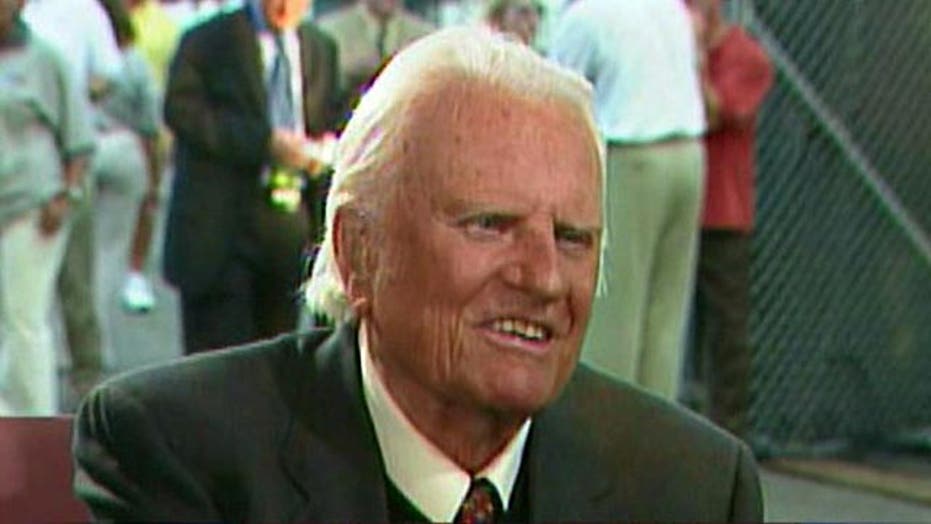 A look back at Sean Hannity's Rev. Billy Graham interview

Highlights from talking to the influential religious leader

This is a rush transcript from "Hannity," April 18, 2014. This copy may not be in its final form and may be updated.

SEAN HANNITY, HOST: And welcome to this special edition of "Hannity," "The Power of Faith." Now, in honor of Easter, throughout the hour tonight, we're going to be showing you some of the most powerful interviews that we have done with some of the most recognizable and influential Christian leaders.

And tonight, we begin with my sit-down with the Reverend Billy Graham back in 2005. Now, since his ministry began in 1947, Billy Graham conducted what he called crusades in 185 countries on six continents, and it began in 1947 in Grand Rapids, Michigan, when he was just 29 years old. And when I sat down with him in 2005, well, he had performed more than 400. I joined him as he embarked on what was billed at the time as his last crusade.

HANNITY: Reverend Billy Graham, very good to see you. Thank you for being with us.

HANNITY: How are you feeling?

HANNITY: Now, they keep saying that this is your last crusade.

BILLY GRAHAM: It may be.

BILLY GRAHAM: It might be. I don't have the physical strength to go on very much longer.

BILLY GRAHAM: And my wife is an invalid. I have responsibilities at home now that I haven't had in the past.

HANNITY: What does that mean to you that this is your last crusade?

BILLY GRAHAM: It means it's great to be in New York for the last week because I've held so many in this area. And in 1957, we were here 16 weeks every night.

HANNITY: Right. You know, that was the amazing thing. It was only supposed to go on for a couple weeks. Then you said, "We'll have one last night in Yankee Stadium." You didn't have room for 20,000 people -- 120,000 people showed up.

HANNITY: And then you ended up doing it throughout the summer, through Labor Day. You never planned on it. So New York is particularly special for you?

BILLY GRAHAM: Oh, very special. I love New York. And every time I see that sign that has red on "love," I feel myself in there with the people.

HANNITY: Yes. What is it, Reverend, about you that you can attract these crowds that others cannot attract? Why are you...

BILLY GRAHAM: (INAUDIBLE) God. I think I started out with some friends in the media, like Henry Luce, who became very close friends, and Randolph Hearst, whom I never met, but he certainly helped support us in the beginning. There's a lot of that type of thing. And in England, I had held a major crusade there before I came to New York, and we stayed there 12 weeks.

BILLY GRAHAM: And we were supposed to stay two or three weeks. And they played it up big in the press. Then I toured Europe, and all the stadiums we went to were filled. In Berlin, we had 100,000 people in one night (INAUDIBLE) Berlin.

HANNITY: You have -- I looked at the numbers -- you have for 60 years over 210 million men, women and children, it's estimated (INAUDIBLE)

BILLY GRAHAM: I don't know about that.

HANNITY: Well, that's what it says, about that.

HANNITY: Got a little higher?

BILLY GRAHAM: Yes, I remember the first time I ever preached, and I'm going to tell it tonight maybe, about how I was very nervous and very tense. And I had four sermons. I preached them all four in 10 minutes, and that was the beginning, in a place called (INAUDIBLE) Florida, in northern Florida, in a little tiny church. It was a cold night, about 40 people, and I was so nervous.

HANNITY: Do you get nervous today?

HANNITY: Are you nervous now about tonight?

HANNITY: Yes, I haven't preached a sermon in -- since September last year.

BILLY GRAHAM: No, in the Rose Bowl.

BILLY GRAHAM: In California. And I am. I'm tense and nervous. And I'm nervous sitting here with you.

HANNITY: Oh, you are not!

HANNITY: You're among friends.

BILLY GRAHAM: I want them to remember that I was faithful, faithful to the gospel, faithful to the call that God gave me. And when I get to heaven, I'm going to ask him why he called me because I was much (ph) used to milking cows and working on the farm than I was preaching.

HANNITY: Your son, Franklin, earlier today told me that he felt you were like a turtle put at the top of a fence pole. In other words, you couldn't have got there yourself.

BILLY GRAHAM: Absolutely. I had to have my wife. I had to have a wonderful staff of people through all the years. I started out as the president of a small college in Minnesota in 1947, I believe. And I had five years of experience in the college. Then we went to Los Angeles. And the press got back of what we were doing, and we went back and went to Boston for my next series of meetings. That was in 1950.

HANNITY: You mentioned something that stuck with me. Do you not know what you're going to say tonight?

HANNITY: Comes from the heart.

BILLY GRAHAM: Yes, I think that I failed by not studying more and praying more and spending more time with my family.

HANNITY: Has the world gotten worse in six decades? Do you see more evil in the world, less evil, is the world getting better?

BILLY GRAHAM: Always been the same.

HANNITY: Always been the same?

BILLY GRAHAM: Everybody's a sinner before God. And we magnify it today because we have television and we have so many other technologies that make what happens in some other part of the world in our living room.

HANNITY: But you don't think -- you don't see a difference. Really, that's fascinating to me when you see all the changes in the world in the last 100 years in human history and human evil. And you agree there's evil.

BILLY GRAHAM: Well, look at 200 years ago, or less than that, the Civil War, where we were at each other throats, brother against brother and cousin against cousin. And we haven't gotten that low yet.

HANNITY: Reverend Graham, it's an honor to meet you.

HANNITY: Thank you very much.