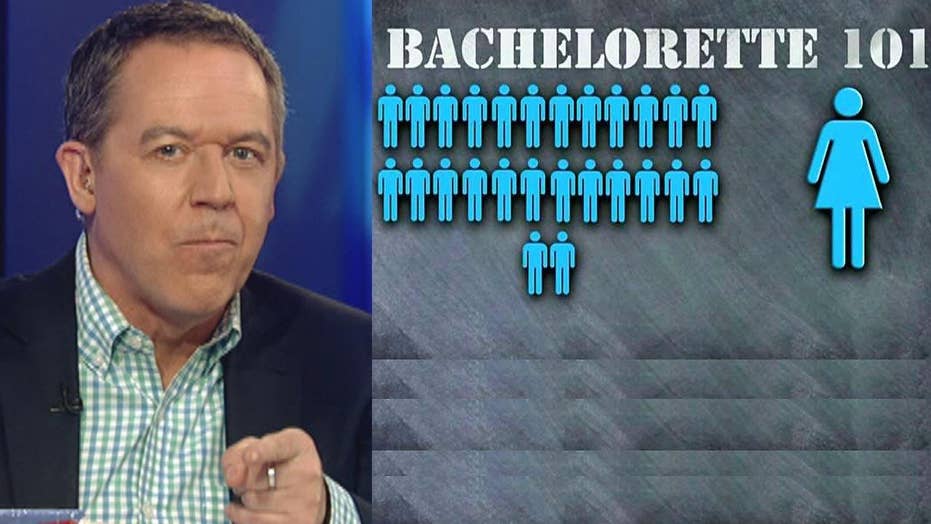 Gutfeld's lessons from 'The Bachelorette'

Dating show exposes one of the great illusions of our time

I watch "The Bachelorette," the show that has 26 men vying for the hand of one woman. I watch it because it exposes one of the great illusions of our time -- and I love the outfits.

Consider this fact: For the world to accurately reflect "The Bachelorette" ratio of men-to-women, you would need six planet Earths with its current male population. For the world to reflect the show's female ratio to male, you'd have to remove 3 billion women from Earth. These are all rough estimates.

Fact: There are 3.4 billion men and 3.4 billion women on Earth. Truly, "The Bachelorette" misrepresents reality. You know when you sell a car and you have all the buyers stop by at the same time? That's this show. It's false scarcity, an illusion tricking you into thinking if you don't act now, there will be none left. See any store that advertises "two days only" or "just one left in stock." It's the same thing.

Every big decision you make -- buying a house, a car, or for women, dating a guy in New York -- the urgency is driven by exaggerating the lack of supply while increasing the impression of outside desire.

It's bad enough to want it, but it's worse when others want it, too.

So to beat this, simply ask yourself one question: Are you pursuing something to have it or to enjoy it? If it's to have, then you won't enjoy it, since having it was the whole point.

Lastly, all of you men attacking me for choosing "The Bachelorette" over the Stanley Cup, I'm sorry, but soccer is just not man enough for me.