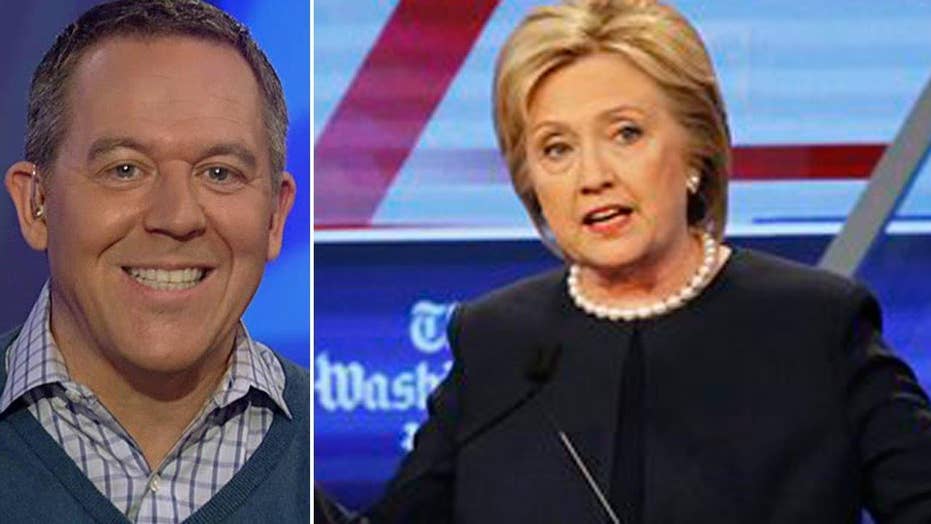 Gutfeld: Why would Hillary lie? Because she's Hillary

Clinton questioned about Benghazi and email scandals at Democratic debate

HILLARY CLINTON, PRESIDENTIAL CANDIDATE: When he was engaging in rhetoric that I found deeply offensive, I said "Basta."

GUTFELD: Basta. It gets worse. At last night's debate, Hillary Clinton refused to say whether she quit the race if indicted over her e-mail mess. She got snippier than a pair of salon scissors:

JORGE RAMOS, UNIVISION DEBATE MODERATOR: If you get indicted, would you drop out?

CLINTON: Oh, for goodness -- that is not going to happen. I'm not even answering that question.

GUTFELD: It's like when Fonzie walks in the "Happy Days." She's the woman equivalent of that test where they blast a puff of air in your eye: painful and unsettling. Even more callus, she claims the Benghazi families lied when telling the media that she told them of video caused the attack that killed their loved ones. Ramos played a video of Sean Smith's mother, Pat Smith, recounting how Hillary told her it was a video, when they knew it wasn't:

RAMOS: On the night of the attacks in Benghazi, you sent an e-mail to your daughter Chelsea, saying that an Al Qaeda-like group was responsible for the killings of the Americans.

RAMOS: However, some of the families claimed that you lied to them.

CLINTON: She's wrong. She's absolutely wrong. I and everybody in the administration, all the people she named, the president, the vice president, Susan Rice, we were scrambling to get information that was changing literally by the hour. And when we had information, we made it public. But then sometimes we had to go back and say we have new information that contradicts it.

GUTFELD: Well, would you look at that? The audience booed a question about Benghazi. And why not, when you're more obsessed with free stuff than the deaths of your own citizens, grace never enters the picture. So why would grieving families make up a story, the story we all heard the day it happened? The answer is they wouldn't. The better question is why would Hillary lie and impugn the character of these families? The answer is: She's Hillary.

So last night, what did we see? In one case, she lied to those families, and the other case about e-mails, she lied to herself which causes her now to lie to all of us. It was nearly four years ago, Clinton and her palls lied about that video to covered their butts and win in election. And now, she lies again about that same video to cover her butt and win in election. It's deja vu, but only if you gave a damn.