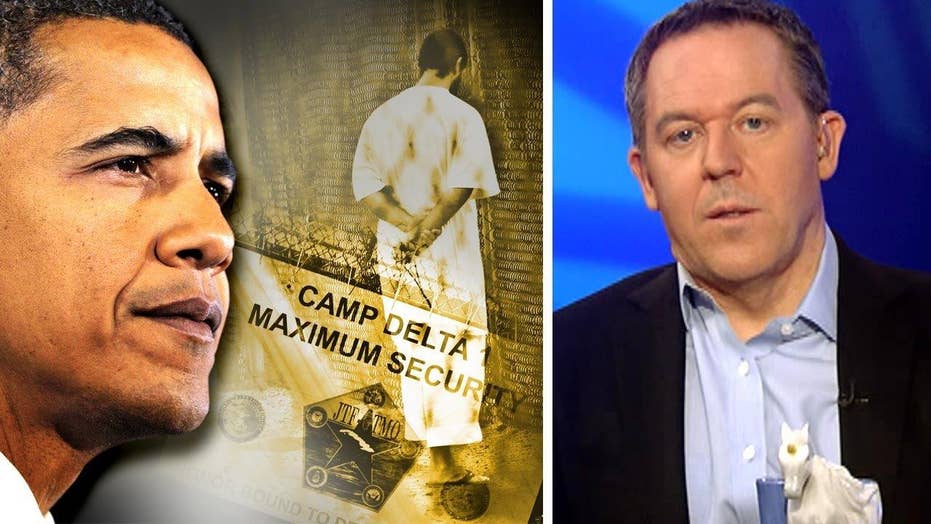 Gutfeld: We pay the price for Obama's obsession with Gitmo

The president is so obsessed with closing Guantanamo Bay, he'd release high-risk heathens, knowing many head right back to exact horror on innocents

PRESIDENT BARACK OBAMA: When it becomes clear that something is not working as intended, when it does not advance our security, we have to change course.

The detention facility at Guantanamo Bay does not advance our national security. It undermines it. It is counterproductive to our fight against terrorists, because they use it as propaganda in their efforts to recruit.

GUTFELD: You know when you've become so obsessed with one thing that you ignore everything else? It is the mark of a "cat lady": Consumed by felines, she shuns family, hygiene, concerned neighbors.

Gitmo is Obama's pile of cats. He is so obsessed by it, his house stinks. And at the expense of our safety, he'd release high-risk heathens, knowing many head right back out to kill. And it's all based on a myth that bad things done to us are caused by mean things we did first, like Gitmo. As a recruitment tool, it breeds terror. So I guess Gitmo caused terrorists to invent a time machine to go back to September 11 and attack us? That's crazy. This must make those Americans working at Gitmo feel great. Your president thinks you cause terror. He also says Gitmo undermines our standing in the world. Sorry, Gitmo didn't do that. For that answer, find a West Wing mirror. He also said Gitmo is pricey -- the first time in history that a leftist cares about your money.

But Gitmo shaming give leftists a fake concern without having to judge our enemies -- like say, Cuba. Seriously, of all the bad things in Cuba, what bugs Obama is Gitmo? Forget the four decades of socialist hell, run by murderist leftists, turning every person into a pauper. Yeah, Gitmo is worse. You know Cuba has no freedom of the press. I guess freeing terrorists takes priority. To him, that's closing a chapter on our history. Makes you wonder what book he's been reading.