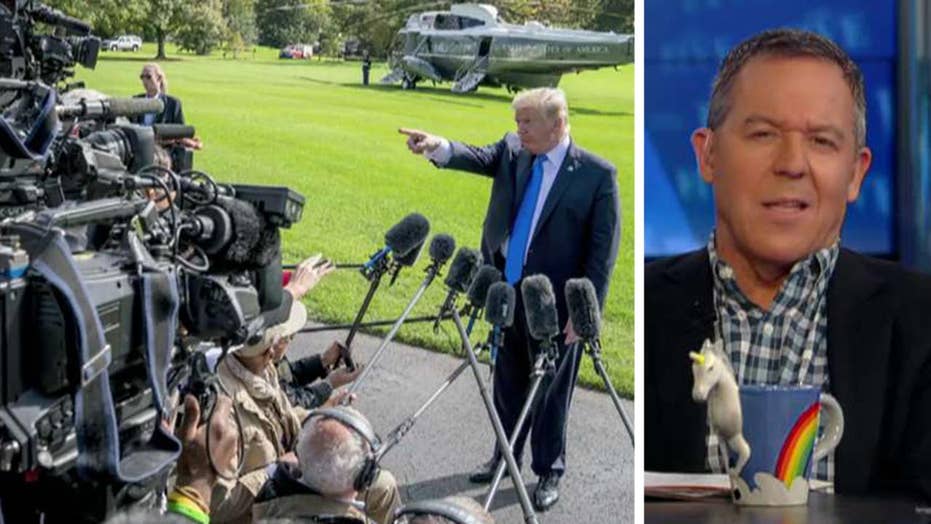 Gutfeld on the words media uses to describe Trump

It's true: The press thinks Donald Trump is stark raving mad. The Media Research Center counted the words reporters used to describe Trump and found he was "angry" 23 times, "furious" 17 times, "outraged" 8 times. He was also "venting," "infuriated," "livid," "erupting," "lashing out," "on a tirade." The good news? No "spontaneous combustion." That's for after the midterms.

So why all this language? Well, it's to make you think the guy with a finger on that famous button is bonkers. Absent any harmful deeds by Trump and faced with blooming optimism about America's direction, the media is like a pack of cats looking for a sack: Out to create a story that fits their own infuriated furious eye bulging narrative. So they traffic in workplace rumors, the stuff that exists in all offices since the beginning of cubicles. Heck, even Jesus dressed down his apostles.

But we get it: Trump's no Jimmy Carter. Thank God. I mean, who'd you rather have? A nice guy mocked by the world or a loudmouth who keeps the world guessing and therefore cooperating.

Now Trump is bombastic but most bosses are. They use their voice like an instrument, as a call to action to wake up the slackers, to get the team to do actual work. That voice isn't there to soothe the concerned or troubled souls in the media. And it's always about the media. They're like ignored teens. And they just hate the new guy who's making them work for their shrinks and drinks. They need someone who makes them feel important by echoing their phony virtues. After Obama, the media got so flabby, they should thank Trump: He's the one who put them on a press room diet where they eat nothing but their own words.