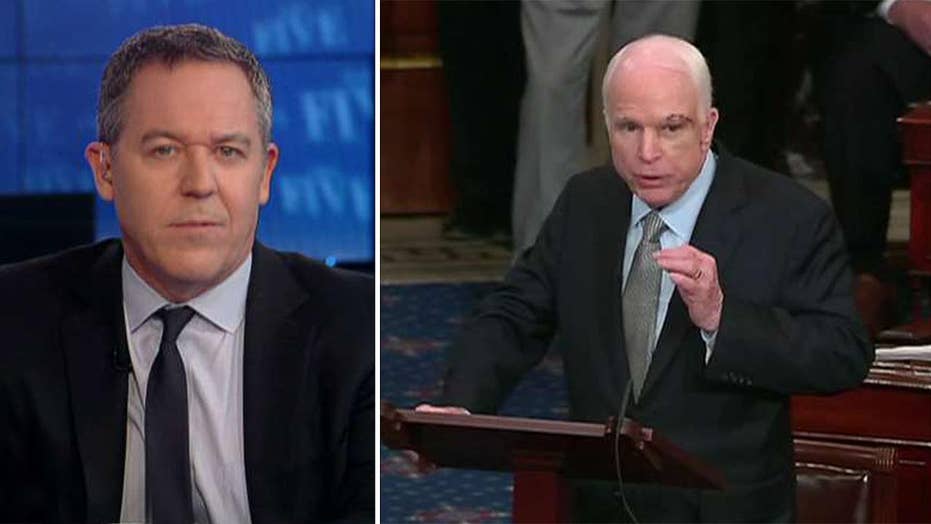 Gutfeld on the life of John McCain

Senator John McCain was an independent thinker, a round peg in the world capital of square holes.

Life is all about holes. You spend your life trying to fit into one, but that's the last thing you should want because when you die, trust me, you'll fit. No matter how round a peg you are, eventually you go nicely into a rectangular hole. It's your job to do what John McCain did: Never willingly fit, never lie down and quit, make a fuss, make everyone work harder. In fact, you can measure a life by the size of the hole needed to accommodate it. Make sure yours is McCain's size.

There are people whose exit leaves a Grand Canyon-sized space that can never truly be filled. Senator McCain left that space. And while condolences may often feel trite, they can help fill that space, especially when there are millions of them. Senator McCain was foremost an independent thinker, a round peg in a world capital of square holes. He owned his thoughts, critics be damned. His experiences taught him to shrug stuff off stuff that would have left us in tears. Five and a half years in a prison camp will do that to you, and that's real diversity.

He was feisty, funny and real. We need a good John McCain and not just every generation but every day. Somebody who reminds us that we don't all have to act the same and who knows that there is a difference between a good idea and the latest idea.

The Earth is covered in cemeteries, endless green acres of rectangular holes. There's one near you and in your future. But if there's an army of round pegs filling square holes won't be easy. And life, be a John McCain, be a little less predictable tomorrow than you were today. Realize that politics is only a small part of life, not life itself. Be the round peg that refuses to fit in.