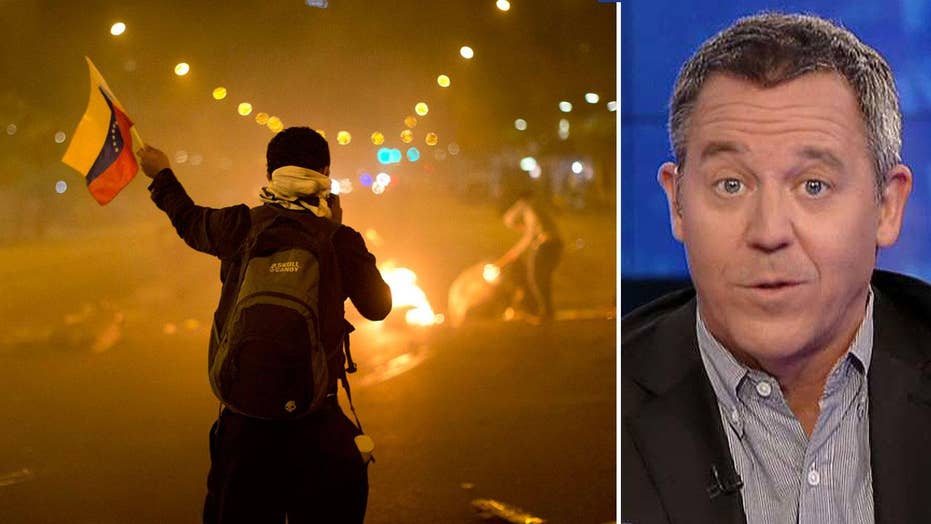 Gutfeld on the consequences of Venezuelan socialism

Where are socialist state's fanboys now?

If I were a professor, I'd teach a course called Socialism 101, where every student must spend every moment on Venezuela. Their eyes glued to the grim results of policies endorsed by the Bernie Sanders of the world. The class actually is happening right now. But is anyone watching? Not if "Game of Thrones" is on or if President Trump tweets. Those take priority.

It's too bad. For the past decade, we have watched an oil-rich country descend into chaos, where toilet paper is worth more than actual currency and their currency not worth it a crap. It is Socialism 101. A government that controls production and distribution creates scarcity followed by a sham elections, arrests, dictatorship, corpses in the street.

But it never starts out that way. It begins with a left-wing populists and its fan base. Self-absorbed elites portraying a holy hell as a heaven and waiting.

So, where are they now, these Venezuelan fan boys? Sean Penn, Jeremy Corbin, Oliver Stone, Michael Moore -- he's doing a play down the road -- Danny Glover, or the writers at Salon who once labeled Venezuela a miracle. Where are they hiding? Why aren't they saying anything? I guess when you see the starving kids, the dying babies, infant mortality at 30 percent, maternal death up 66 percent, it is hard to show your face. As apologists, they played a role in it. The technical term: useful idiot.

As people die in the celebrities' utopia of the month, the stars inevitably move on, off to find another radical to romance. Funny how this never happens in free markets. Maybe if we killed more people, the stars would love us.