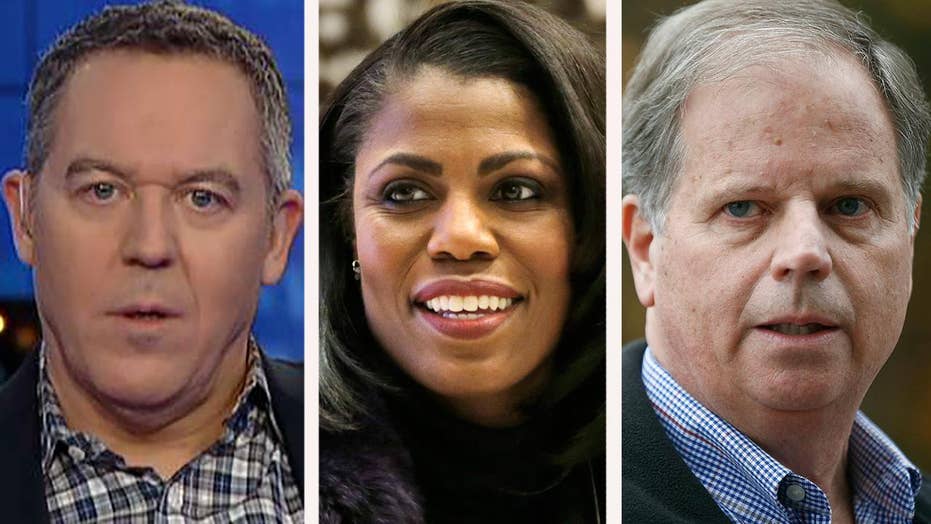 Gutfeld on Omarosa and Alabama

Doug Jones wins, Roy Moore loses and Omarosa Manigault is out of the White House.

It's the news that shocked the political world: Omarosa is out. We now go to the White House staffers for a response.

GUTFELD: Very emotional, apparently. So what exactly happened last night? Well, we have tape of how it might have unfolded:

DONALD TRUMP: Omarosa, you wait outside with Juan.

OMAROSA: Let me ask you a question if I may.

TRUMP: Omarosa, I didn't call for you yet.

OMAROSA: I've been running around for weeks.

TRUMP: We've all got problems. Life is full of problems.

Omarosa has to go. You're fired.

OMAROSA: Thanks for the opportunity to be here. Thank you all.

All right. On to the real news: Doug Jones wins. Roy Moore loses and Al Franken keeps his pajamas on. There are those on the right who are bummed because a Republicans loss makes it harder to fulfill Trump's agenda. To them, I say relax. The silver lining to this cloud is actually bigger than the damn cloud. First, this is no referendum on Trump. It's a referendum on a state election that made all of us squirm -- including you. You can tell by Trump's polite tweet after he was relieved not to have this albatross around his neck. Now the party must get to work and find a real candidate to unseat Jones.

But here's the real good news: The only reason we had this election was because Donald Trump won. It's true. Imagine it's October 2016 and a genie offers you this deal: You can win the White House, change the political landscape, dump the Clintons, but you'll lose a Senate seat in a year. Wouldn't you take that deal? Of course you would. Sure, the Republicans blew the primary which got us this mess, but it could be far worse. You could still have that seat, but under Hillary.

As for you, Doug Jones, stop grinning and open your mind. You're already a lame duck. A lefty in Alabama is like a popsicle in a sauna, which is why you nearly lost to the most flawed candidate ever -- your butt saved only by Republican write-ins. So grab lunch with the president. You already have something in common with him: Your opponent sucked.