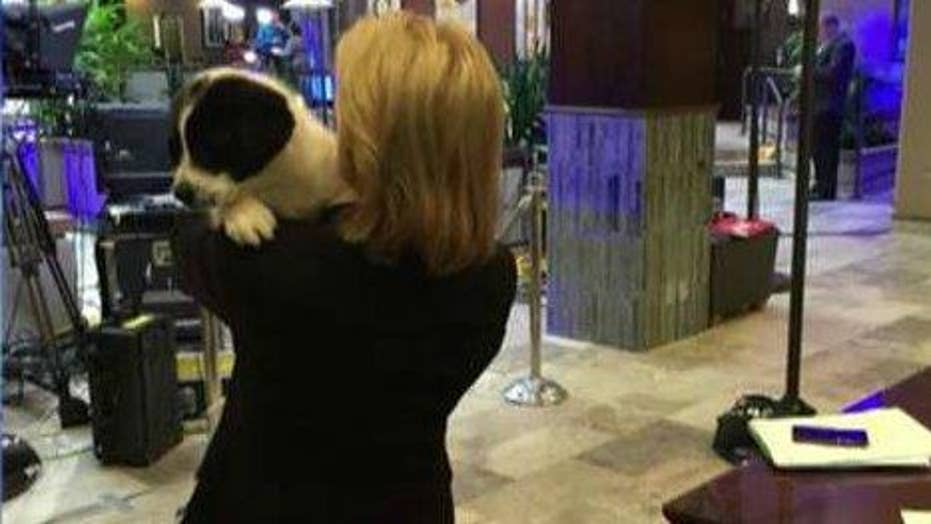 Greta: Thank you to 'The Five' for helping pups find homes

Greta's 'Off the Record' comment to 'On the Record' viewers: In the midst of NH primary coverage and debating the issues, 'The Five' managed to multitask and help some adorable puppies find their 'forever homes.'

Let's go 'Off the Record." I want to give a shoutout it to "The Five," who in the midst of their fabulous Iowa caucus coverage, managed to do what they do so ably, multitask, and doing something near and dear to my heart, helping rescued pets to find homes.

So, during one of their shows in Iowa, "The Five" featured these adorable pups in hopes of finding great homes for them. So, how did they do? Well, check out Kimberly Guilfoyle just two hours ago:

KIMBERLY GUILFOYLE, CO-HOST OF 'THE FIVE': We have some follow-up because take a look at this, Squat was adopted by Angie Benza (ph) from Northwood, Iowa and Moose's new home in Michigan adopted by Bill and Stacy Daniels. Most incredible people wrote a great letter to us all and so Greta and I were writing back and forth that we would like to be adopted by them as well.

Okay, that's the best. By the way, I did meet Moose in Iowa and here's a picture of me with Moose in my arms. Like Kimberly, I fell in love with Moose. I should have cut and run with him when Ihad the chance. I could outrun Kimberly - maybe.