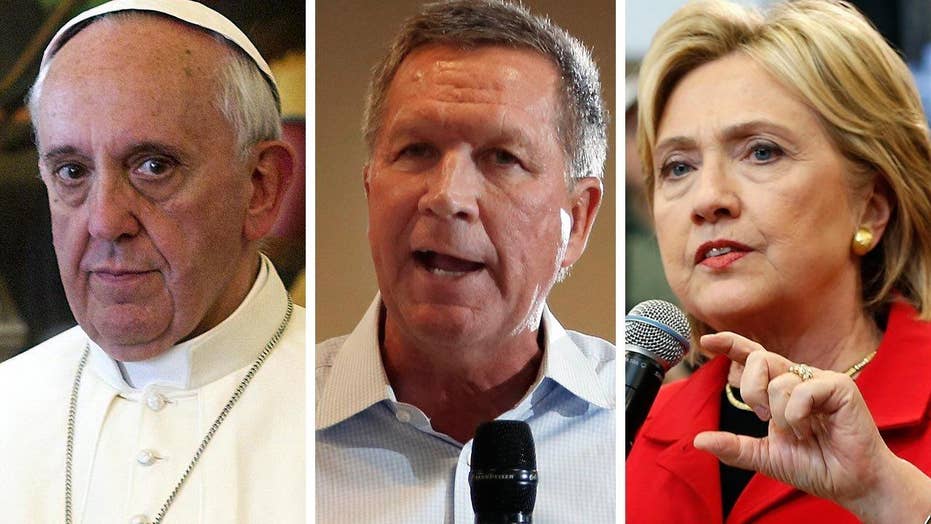 Greta's 'Off the Record' comment to 'On the Record' viewers: To everyone involved in the 2016 presidential race, candidates and reporters alike - Let's just focus on issues and solutions instead of smacking rivals. After all, we all live in glass houses

Let's all go "Off the Record." Remember last week, when Pope Francis said the person who thinks only about building walls and not building bridges is not a Christian? We all know who he meant - Donald Trump.

Well, the Twitter universe went absolutely wild, pointing out the man the pope who was critical of Trump and walls has some pretty high ones himself at the Vatican.

And then there is the statement yesterday by Governor John Kasich talking about his first run for State Senate in Ohio in 1978.

JOHN KASICH, GOP PRESIDENTIAL CANDIDATE: How did I get elected? Nobody was -- I didn't have anybody for me. We just got an army of people who, and many women who left their kitchens to go out and go door to door and to put yard signs up for me.

Then, Secretary Hillary Clinton sharply criticized Governor Kasich for his line about women leaving their kitchens. And Clinton tweeted, "It's 2016. A woman's place is wherever she wants it to be." Well, rewind to her husband's 1992 presidential campaign when then candidate Clinton's wife, Hillary, said this:

HILLARY CLINTON, DEMOCRATIC PRESIDENTIAL CANDIDATE: I suppose I could have stayed home and baked cookies and have this. But what I decided to do was to fulfill my profession which I entered before my husband was in public life.

Ouch! Baking cookies. She got in trouble for that. So, my message to everybody and I mean everybody. I even throw myself into this one. Perhaps we should focus more on issues and solutions and not smacking the other guy.

Because guess what, we all, and I mean all, live in glass houses. And that's my "Off the Record" comment tonight.