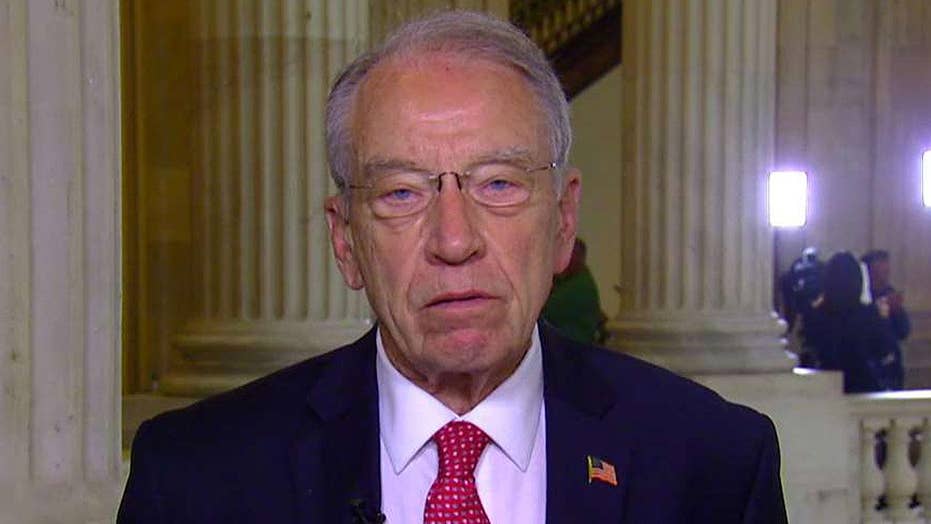 On 'Your World,' the Senate Judiciary Committee chairman reacts to the firing of Comey, calls for a special prosecutor to oversee the Russia probe

This is a rush transcript from "Your World," May 11, 2017. This copy may not be in its final form and may be updated.

NEIL CAVUTO, HOST: With us right now is Senate Judiciary Committee Chairman Chuck Grassley on what the president said, when he said it.

Senator, very good to have you. Thanks for taking the time.

CAVUTO: I know there is not much you can tell me about private meetings you had with the former FBI director. But you did come very close to verifying what the president just told Lester Holt of NBC News when you talked about Mr. Comey briefing you and the ranking member, Senator Feinstein, on the targets of various investigations.

You said that: "It wouldn't be appropriate for me to reveal those details before the professionals conducting the investigation are ready."

You went on to say, sir, that, on Tuesday: "The president's letter said that Director Comey told him he was not under investigation. Senator Feinstein and I heard nothing that contradicted the president's statement."

So, it sounds like you're saying -- and I don't want to put words in your mouth, Senator -- the president was telling the truth.

GRASSLEY: I -- I can only stand by what I said.

And I was very careful how I said it, because I didn't want to violate anything that goes on in those secured briefings. But I can say I didn't hear anything that indicated or contradicted what the president said. Now, you -- a lot of people are getting into, was it appropriate for the president to ask those questions?

CAVUTO: So, you seem to be casting doubts as to whether it's appropriate for Director Comey to be telling the president.

GRASSLEY: I will leave it up to Mr. Comey whether or not he violated anything by telling the president that, because I can't make that judgment.

CAVUTO: All right, I understand that, Senator. But it would have happened no fewer than three times.

Now, the reason why this is getting to be such an issue, as you already outlined, is that there's confusion about who relayed what and when. I didn't even know about this dinner that the FBI director had, Mr. Comey and the president, and obviously that issue came up.

Do you think that an issue, regardless who is asking that, that that kind of thing should come up at a dinner?

So, I think it's a pretty closely watched situation that nobody gets into those things, unless there's a very good reason for doing it.

Senator, you also pointed out, "Now Mr. Comey is no longer the FBI director, you said, but the FBI should still follow my advice. It should confirm to the public whether it is or is not investigating the president. Because it has failed to make this clear, speculation has run rampant."

GRASSLEY: Well, I prefaced that in my remarks by saying that, normally, for the average American person, it shouldn't be made public.

But I think, when you're talking about high-level public officials that -- and there ought to be a reason for letting the public know whether somebody is being investigated. And I don't want to say whether it's the president or the vice president, member of Congress or the Senate or a Cabinet maybe.

But there's some point where the public's business ought to be more public, if you're going to have accountability in government.

CAVUTO: This comes at a time, sir, when your North Carolina Republican colleague Senator Burr and Justin Amash in the House have said, you know, that maybe now is the time to create an independent Russia commission.

GRASSLEY: I think the reason we got into this way back in January is because we want transparency, we want to get to the bottom of whether or not Russia -- what role they played in the election. There's no evidence whatsoever now that they changed one vote, but that suspicion is out there.

And if you're going to have people be less cynical about the institution of the government, we ought to get to the bottom of it. Well, that's -- we're in the process of doing that.

A special counsel has been suggested. A special counsel never releases any information unless there's an indictment. It's going to take a while to crank up a special commission. And they obviously would give a report. But that's delaying things.

We have got four committees of Congress working on it. We don't need any lost time. We ought to proceed where we are and get to the bottom of it the way we're doing it.

CAVUTO: The reason why I mention is, Senator Burr went on to say: "I'm troubled by the timing and reasoning of Director Comey's termination. His dismissal further confuses an already difficult investigation by the committee," hence going back to this idea of an independent commission.

Others have recommended a special prosecutor. They argue that, left in the hands of committees that are dominated by Republicans, you will never got to the bottom of that. What do you say?

You're seeing Whitehouse of Rhode Island and Graham of South Carolina working very closely in the subcommittee of my committee. I don't know about the House of Representatives, but those two environments in the House, there's a great deal of bipartisanship. I don't think that's legitimate.

Acting FBI Director McCabe went in the hot seat today, Senator, and said there's no widespread loss of confidence at the FBI, directly contradicting President Trump, who said, in light of what was going on with Comey and how he handled the whole Clinton e-mail mess, that there was.

GRASSLEY: I think that that's a judgment people make.

CAVUTO: Senator, is it your sense that whoever the president appoints to replace Director Comey, they shouldn't have been actively involved in his campaign, thereby potentially ruling out Chris Christie, Rudy Giuliani, people like that?

GRASSLEY: I believe that, with all of the problems that we have getting a new administration going, for reasons beyond just Comey and that vacancy, there ought to be every safety taken to make sure we don't become more controversial.

CAVUTO: Senator, I would ask you, it's not as if you guys don't have other things to do. You have a big economic agenda, an effort to repeal and replace the Affordable Care Act, Obamacare, move on tax cuts. Are you worried that this is going to get delayed?

GRASSLEY: No, because we have a division of government between executive, legislative and judicial, and Congress has its own role. And we're not being affected by it if we have a determination to move forward.

As chairman of this committee, then, Senator, I just want to be very clear. Is it your view, vantage point of heading Judiciary here, that any push for an independent prosecutor or an independent commission is unwarranted right now, even with what you heard from Mr. McCabe today?

GRASSLEY: That's my personal view. And I thought you were quoting Burr to have a special commission, and not McCabe.

CAVUTO: I'm just saying, the initial things that and the conflicts and the contradictions you heard from McCabe today on other matters, the one I alluded to before.

GRASSLEY: Well, I would be expressing a lack of confidence in what I respect about Warner and Burr, what they're doing on the Intelligence Committee, and what Whitehouse and Graham are doing on the subcommittee of my full committee.

CAVUTO: I did want to get you a -- one last answer as well to respond to Democrats who keep using the term Nixonian, who go back to Saturday Night Massacre, referring to the time when Richard Nixon get rid of Archibald Cox, the Watergate prosecutor, as well as his acting attorney general and deputy.

GRASSLEY: Well, the other day -- and I want to give a longer answer.

But the other day, I said they ought to suck up and move on. But let me give a further explanation. You have got to remember that a key person in this decision, because the president asked them for their advice, was a memo by Rosenstein. He was approved by the United States Senate 94-6. He served under both Republican and Democrat presidents.

And he has wide respect. And the president appointed him. And if you're a member -- a Democratic member of the Senate and talking about Nixonian, you're really saying that you're losing confidence in one of the people you voted for that President Obama had great respect for and kept in his administration. It doesn't add up to me.

CAVUTO: Do you buy what The Washington Post is reporting, Senator, that Rosenstein was upset with being fingered making and being responsible for these chain of events and pushing Comey out?

GRASSLEY: I think that -- well, it's my understanding that, since then, that's been discredited. That's all I can respond to at this point.

Senator Grassley, very good catching up with you. Appreciate it, sir.