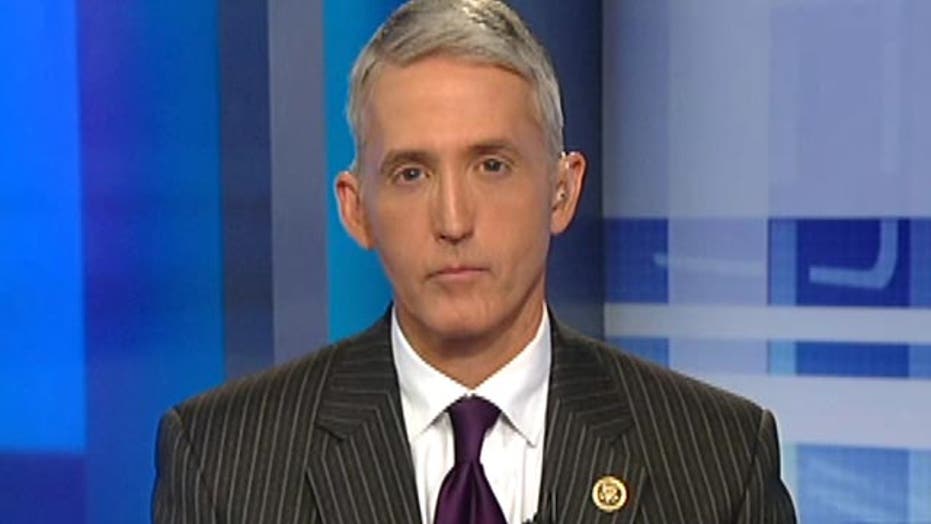 Gowdy: Why the Benghazi report will be delayed until 2016

This is a rush transcript from "On the Record," April 22, 2015. This copy may not be in its final form and may be updated.

And today, news that the highly anticipated Benghazi report will now be delayed until 2016. That means it will come out in the middle of the presidential election year. And House Speaker John Boehner is blaming the Obama administration's former Secretary of State Hillary Clinton.

REP. JOHN BOEHNER, SPEAKER OF THE HOUSE: The administration has made if virtually impossible to get to the facts surrounding Benghazi.

ED HENRY, FOX NEWS CHIEF WASHINGTON CORRESPONDENT: The Republican terrorism in of the Benghazi Committee suggesting he might put out his final report just a few months before the 2016 election.

BOEHNER: They could clean this up a whole lot quicker if the administration and former Secretary Clinton were in a position to actually cooperate.

UNIDENTIFIED MALE: Has Hillary Clinton gotten back to you?

REP. TREY GOWDY, CHAIRMAN, HOUSE BENGHAZI SELECT COMMITTEE: She has not, but her lawyer has been good about getting back.

BOEHNER: They have got a lot more work to do.

Nice to see you, sir.

VAN SUSTEREN: You realize if this comes out end of this year, the year 2016, the credibility is going to be pinched because people will say it's political, you wait until Secretary Clinton was running for president.

GOWDY: It could be. Of course, that assume the report would be critical of her. I don't make that assumption. We're still in the process of gathering facts. If the report is not critical of her, then she would probably want it to come out closer to the election. But it's not going to come out in the middle of 2016. I hope it doesn't come out in 2016, period. I hope we are done before the end of this year. And I say hope because there are certain variables that I cannot control.

VAN SUSTEREN: All right. What's the problem? I mean, why isn't this moving faster?

VAN SUSTEREN: It seems to me if you made requests by a certain date, drop-dead date, I would probably make some time in November of this year. I would say it's pretty fair. In the courtroom, where both you and I are from, to draw an adverse inference, meaning it would be unfavorable to the administration.

GOWDY: To the administration, absolutely. If DOD were not producing documents to us, you could draw that inference. I'm reluctant to draw a negative inference about the Department of Defense or our military. You are right, in the courtroom that happens. I'm not sure the court of public opinion that people would want to draw a negative inference. I think they would just conclude, well, Gowdy, you finished too quick. You should have waited until the documents came in.

GOWDY: Cooperative from the standpoint is she has never once evidenced a lack of willingness to come in to talk to us --

VAN SUSTEREN: Lack of willingness, sure, I will come in and talk to you like in 10 years. If you said to her I want you here on July 5th, and has she said she will?

GOWDY: She would come in November of 2014. Think back to November of 2014, that's when David Kendall and Elijah Cummings wanted me to bring her. That is before we had her emails. So I would --

GOWDY: Well, we have 300 now. We had eight in November of 2014. So if I had done what they asked me to do and expedited this, I would have had a conversation with her in the dark. I would not have had had her emails.

VAN SUSTEREN: Could you not just bring her back and say now you gave me eight emails and now we have 292 more. You didn't give them to me before so now come back and talk to me about this.

GOWDY: Absolutely. Someone would say you are bringing her back and forth before -- it's harassment, you are vindictive, you should have just called her once. I mean, we are trying to do this the right way, which is gather the evidence and have a single conversation with her about Benghazi. Greta, there are two people who could expedite this process much quicker than me or you or Elijah Cummings.

VAN SUSTEREN: And they are?

GOWDY: President Obama and John Kerry. President Obama controls the administration and John Kerry controls the State Department. If they sent a message to the folks that are reviewing our document request, give these folks what they need to complete their report, or give them a legal reason why you're not going to, but quit playing this game about asking for priorities and what do you need first and are you sure you really need it, give them what they ask for, this would be done much sooner than 2016.

VAN SUSTEREN: You have asked Secretary Kerry or President Obama let's stop playing the games. These are documents I want. We have the right to ask for this document either, you know, give them to us or --

GOWDY: I have not had that conversation with President Obama. We have been very clear with the Department of State, the sooner you comply with our request, the sooner this will wrap up.

Look what happened with the emails, Greta. They didn't bother to tell us they didn't have her record. So when I say I've lost confidence in the State Department's objectivity, that's exactly why.

VAN SUSTEREN: I hope it gets done sooner than later. I realize you are not getting all the documents. But if it doesn't get done by the end of the year, I think it's fair who dragged his feet, who wouldn't give you documents and who what was in the way, and I think the American people can draw a fair inference from that.

GOWDY: I want it done before 2016. And to that end, we're doing four witness interviews a week, whereas we were doing two. That's ambitious for a staff our size, four. We are trying to accelerate it but I have to have the documents.