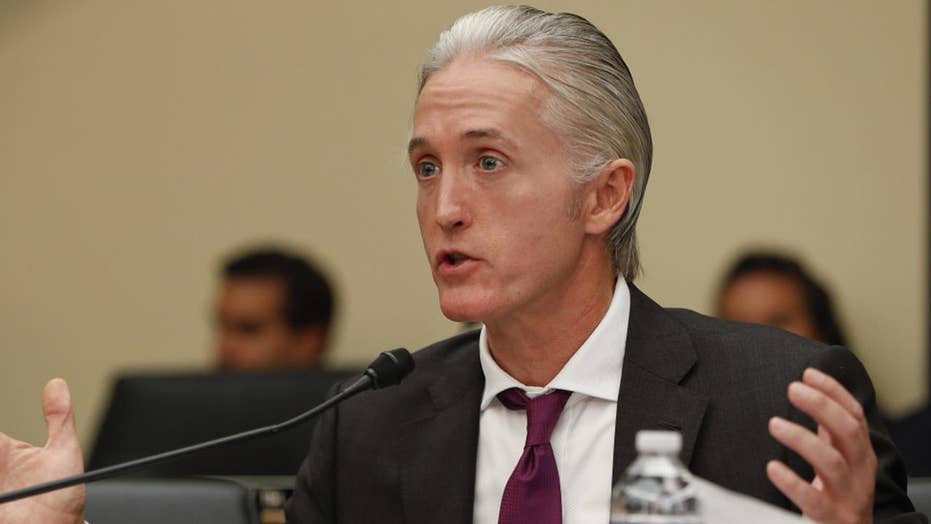 Gowdy defends FBI use of informant in Trump campaign

'Special Report' All-Stars on the politics of the Trump-Russia investigation.

This is a rush transcript from "Special Report with Bret Baier," May 30, 2018. This copy may not be in its final form and may be updated.

I'm even more convinced that the FBI did exactly what my fellow citizens would want them to do when they got the information they got, and that it has nothing to do with Donald Trump.

SARAH SANDERS, WHITE HOUSE PRESS SECRETARY: Let's not forget the deputy director of the FBI was actually fired for misconduct. The president is concerned about the matter and we're going to continue to follow the issue.

BAIER: OK, so Trey Gowdy is one of the people who has seen the documents, he's read them. He's also been briefed in the classified briefing, and is saying that he doesn't have a problem with what the FBI did as far as an informant in or around the Trump campaign. Here is the president last night.

DONALD TRUMP, PRESIDENT OF THE UNITED STATES: So how do you like the fact they had people infiltrating our campaign? Can you imagine?

GOWDY: It was President Trump himself who said, number one, I didn't collude with Russia, but if anyone connected with that the campaign did, I want the FBI to find that out.

SEN. MARK WARNER, D—VIRGINIA: What worries me beyond the Russians themselves or the collusion issue, but the president's willingness to make broad based ad hominem attacks against the whole integrity of the FBI.

BAIER: So what about this and where we stand and the Attorney General Sessions comments, all of it? Let's bring in our panel, Byron York, chief political correspondent for the "Washington Examiner," A.B. Stoddard, associate editor at Real Clear Politics, and Guy Benson, political editor at Townhall.com, also on radio with Marie Harf, who I guess right is holding down the fort.

BAIER: OK. Your thoughts on Trey Gowdy and what this means for the investigation.

GUY BENSON, POLITICAL EDITOR, TOWNHALL.COM: I think we need to pay very close attention to what Trey Gowdy because he has extraordinary access to actual information about this. We all chatter about it and speculate all day and all night, but he knows more than 99.9 percent of us do because he has seen actual documents. So when he comes and says this was an appropriately predicated investigation and the informant within the Trump campaign was not a spy or acting inappropriately in any way, I think that matters.

And many in the media are seizing on that element of his interview with Martha MacCallum. But the quote also to me that sticks out, he said, quote, "It has nothing to do with Donald Trump himself." That is significant. If Gowdy is saying there was this informant, which there was, what he was examining was not targeting the president. That matters.

BAIER: Byron, that's true. As you look at the coverage around the horn, the second part really got chopped off.

BRYON YORK, CHIEF POLITICAL CORRESPONDENT, "WASHINGTON EXAMINER": The first part got ignored. The second part -- I think there are a couple of reasons to explain this. One, Trey Gowdy as a federal prosecutor I think has more trust in the Justice Department then Devin Nunes does. I think it's pretty clear here.

BAIER: We should point out that we haven't heard from Devin Nunes. He was out and about and talking a lot until that briefing.

YORK: And he has not talked about the briefing. There are other people who were in the briefing who have not talked about it as well. He is not the only one. But I think the important thing to this morning is the House was trying to get documents about this informant. They were trying to say, for example, did the informant issue, give reports to the Justice Department? If the informant talked to George Papadopoulos, did he write it up? Did he give it to the Justice Department? The fact is they haven't seen that stuff yet. So the Justice Department can say we followed all the rules. Everything is great, don't worry about it, we did it by the book, but the House hasn't seen the stuff yet.

BAIER: The other question is if the president-elect is getting classified briefing is as president-elect, why is he not in the loop if it had nothing to do with President Trump? Why was he not told what the informant is trying to do about finding any Russia connection in those briefings? One would think he had briefings along the way.

A.B. STODDARD, ASSOCIATE EDITOR, REAL CLEAR POLITICS: He was briefed. The Hillary campaign was briefed. They were told that this was happening. And people are questioning Trey Gowdy -- they are impugning his integrity, his motive here today.

STODDARD: No, but I'm talking about his critics here. I'm talking about people calling him a phony, saying he's covering up for a corrupt FBI because in the fever swamps and in travel battle, people want to paint this like he is a secret Loretta Lynch-Hillary Clinton-Obama partisan fighting to cover up a corrupt FBI. He is doing this because he knows what President Trump is doing is what Senator Warner describes. He's launching an assault on the intelligence community and the law enforcement agencies that we depend on in this country, and he's doing it knowingly.

What is Rudy Giuliani running around telling reporters in town? The president thinks this is working. He's branded it "spygate." It's working. This is a campaign to discredit Bob Mueller's findings and nothing else.
Trump knows there was no spy infiltrating his campaign. He knows that it wasn't him that they were after, that they were checking out Russians that were trying to get into his campaign and connect with his campaign, but he's doing it anyway.

WARNER: People have got exhaustion from the day the day, back and forth of this story. I think the American public will be tired of it if this is not wound down in this calendar year.

BAIER: I think that's significant. He's part of the intelligence committee that was looking into this who is really aggressive in the beginning and seems to be kind of saying we've got to wrap this thing up by the end of 2018 whether it's before the midterms or after.

BENSON: Basically echoing the vice president from a few weeks ago urging Robert Mueller to get this thing finished up soon. And I think it makes sense on some level. Investigations don't need to be unending and forever, which seems to be the standard that some Trump critics want in this case.
It's a cloud that continues to hang over him. If the point is to prevent the Russians and other hostile powers from influencing our elections again in the future as the attempted to do in 2016, it would be nice to know what happened before the next election. So what Warner said there I think you are right is significant, a Democrat saying, OK, let's go.

BAIER: The other story, obviously "The New York Times" had this story, not a surprise to some people that the president may have said why don't you get back in the game to Attorney General Sessions on his recusal. Here is the president on tape and also Trey Gowdy weighing in on this.

TRUMP: Sessions should have never recused himself. And if he was going to recuse himself, he should have told me before he took the job and I would have picked somebody else.

GOWDY: If I were the president and I picked someone to be the country's chief law enforcement officer and they told me later, oh, by the way, I'm not going to be able to participate in the most important case in the office, I would be frustrated, too.

YORK: I think the sound you played from the president was from July of last year. He's still mad about it, and he's always going to be mad about it because he believes that that the grounds that Sessions used to recuse himself were knowable before Sessions was even appointed attorney general.
And I think when Trey Gowdy said, hey, maybe Sessions could have said, wait a minute, will have to recuse myself from this extremely important case, the president is clearly still mad about it, but frustrated because the chairman of the Senate Judiciary Committee who would be responsible for confirming a successor as attorney general, has basically said to the White House, I think we are busy. I don't think we can confirm another attorney general.

BAIER: That's where we are tonight. Next up, the big dinner date tonight as the Trump administration courts North Korea in New York.