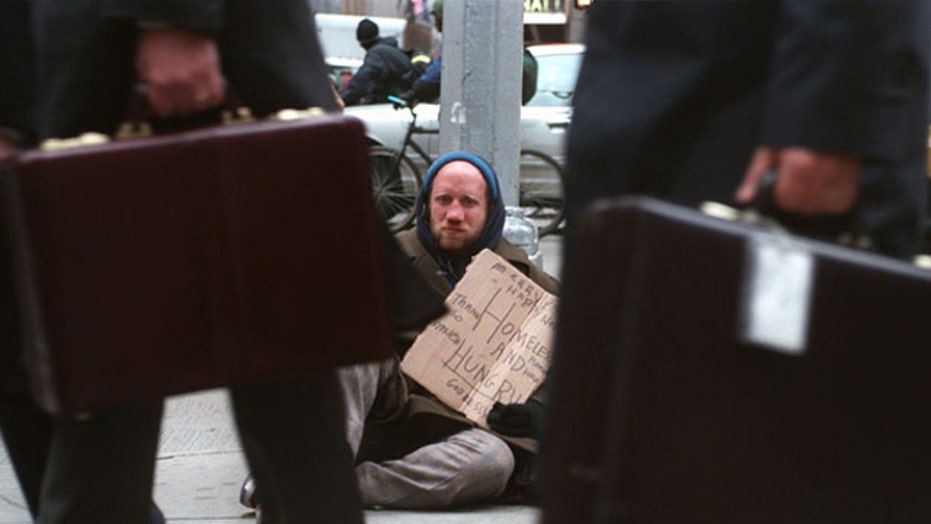 Poverty is a painful reality for nearly 1 in 5 Americans

JONATHAN HOENIG: Interestingly, before the War on Poverty began, the poverty level had actually been dropping precipitously. In fact, it fell by about half from 1950 to the mid-1960s, when Lyndon Johnson began the war on poverty. Since then, as your piece pointed out, it's been $16 trillion spent on the War on Poverty-that's actually more than we've spent on all the military wars in history, and the net result, as you pointed out, is higher poverty levels. The safety net itself is destructive. It creates basically two classes: victims, that is destructive people, and parasites, who are the recipients of the welfare. I'll tell you, it doesn't help their long-term prospects, either.

STAR PARKER: It's not just the spending, alone. What happens with the welfare state is that it rewards ill behavior. What we've seen is marriage collapse as a result of the means test that are attached to government dependency. When marriage collapsed, you end up with the scenario we have, where 40 percent of American children are now raised in single-headed households. So with that you have poverty, there's just no question. The values now we're starting to see in the suburbs that we thought were insolated in our inner-city communities and our ghettos are now spilling out. The White out-of-wedlock birth rate today is 8 percent higher than where Blacks were in the 60s when they started this social engineering. That's the problem.

BOB BECKEL: Let's correct something-the fact is that in the 1950s and early 1960s, you're right, the poverty rate was falling. It also was the greatest growth of the middle class in the history of this country, and most of that was people who were in the suburbs, so that's not a surprise. What has happened, at least demographically, is a lot of people fled the inner city. A lot of minorities who were in the middle class went-I can use my own area, Washington DC, in Prince George's County, which was almost all White is now almost all Black.

WAYNE ROGERS: I think the statistics are somewhat misleading when Jonathan quoted them the way he did. After 1996 when the Clinton administration, by the way, changed the Welfare Act, poverty was actually reduced for the next ten years. So this is a recent phenomenon up from 2008 to today, that we've had this massive increase, and it's been a huge increase just in the last four or five years. The statistics don't tell you all of that.

WAYNE ROGERS: I'm in favor of the Fourth Amendment. Any time you violate the Constitution-the Constitution was written for a purpose. We're a society of law, not of men. We did not expect those kinds of things to happen under any circumstances, and there's no excuse for it happening. When you start suspending civil liberties-and abuse, too, it's going to get abused. The federal government abuses everything. You have people there who don't know what the hell they're doing and have no respect for the Constitution, and therefore they abuse it. If you empower them, they're going to abuse it.

BOB BECKEL: Wayne's exactly right. Whenever you allow the rules to be stretched, and in this case, way overstretched into the Constitution, you're going to have people involved in those programs take the ultimate path they can to get the most information. I think one of the things we need to pull in here, by the way, are the phone companies that have helped the NSA, allowing them to interrupt their trunk lines. I mean it is the worst invasion of privacy. The NSA has been doing this since the 1950s, but it used to be that they targeted people who were potential enemies to the United States, not everybody.

STAR PARKER: Americans are becoming more and more suspicious about our government and their overreach into our freedoms. The TSA patting us down, the IRS looking at us in a different way depending on your political persuasions-and now you can mix up-I mean what incompetence, to say we're listening to Egypt at 20 Old Country Road and you end up listening to 202, which is Washington DC. These bureaucrats are totally out of control and I'm glad we're looking more closely at what is happening in our so-called "security area."

JONATHAN HOENIG: They're evading the actual, real war. All this snooping, all this spying on Americans is actually an evasion of the real enemy, which is Jihad and state-sponsored Islam. I mean at least the Egyptians are denouncing it. At least Nigerians are actually trying to fight it. It's like us-we can't make up our mind on the Muslim Brotherhood, on militant Islam-so instead, we have to worry about our own government spying and actively working not against the enemy, but against Americans.

BOB BECKEL: If I won I'd come to "The Five," but if I worked for Jonathan I wouldn't show up to work, I can tell you that. There are a number of people that have jobs that when they wake up in the morning they don't exactly go running off to get there. I think that 68 percent is vastly overstated.

WAYNE ROGERS: I wouldn't give it to Jonathan because he's not a charitable case, but I'd certainly would give some of the money away if I won. I think Bob is absolutely right. The 68 percent is-when you're faced with something like that, someone's going to give you $10 million-yeah and I've got a lot of gold bricks to sell you, too. I don't believe it.

STAR PARKER: I'm hopeful. I think the numbers might because they're just decent, hardworking people, and I can see it reflecting in these numbers. And $10 million is not a lot of money, frankly, because the government's going to take half, your family is going to smooch. All your missing cousins, they're going to be right at your door. And you have to hire private security because you never know if somebody's going to try to kill you now.

JONATHAN HOENIG: Forget $10 million-think about the people who have hundreds of millions. Billionaires, the entrepreneurs-they still go to work in the morning. It's because people get a lot more out of work. Any element of a creative life fuels a happy existence, and work has a real value unto itself. Americans invented the phrase to make money: "we're into production, we're into creation, we're into thinking." So I'm not surprised, even if you won $10 million, most people would not want to go sit on the beach for the next 40 years of their lives.

WAYNE ROGERS: PROTECT YOURSELF AGAINST RISING INTEREST RATES WITH (TBT)