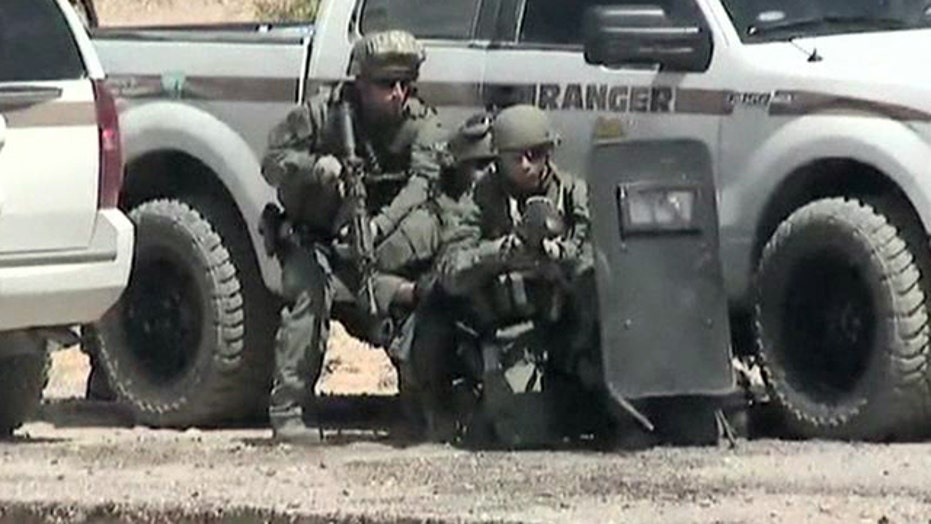 How the government is running wild

This is a rush transcript from "Hannity," April 23, 2014. This copy may not be in its final form and may be updated.

SEAN HANNITY, HOST: As we told you in our last segment, there is major concern that the federal government could be eyeing yet another massive land grab. This time, it's northern Texas. Now, the state's Attorney General Greg Abbott is warning that the BLM wants to seize over 90,000 acres of land near the Red River, close to the border of Oklahoma.

Now, earlier today, Texas Governor Rick Perry -- he addressed the controversy on "Your World With Neil Cavuto." Watch this.

GOV. RICK PERRY, R-TEXAS: I don't think Americans want to see another one of these exhibitions from the federal government of them coming in with armed troops over an issue that ought to be taken care of with a little common sense.

It's not a dare, it's a promise that we're going to stand up for private property rights in the state of Texas, and I don't have a problem in the world with Attorney General Abbott's words here. But the key on this from my standpoint, Stuart, is the federal government already owns too much land.

Are we going to relitigate every piece of private property that we got in this country because we have a federal government that's out of control?

Karl, let's start with the Cliven Bundy situation. All right, maybe he owes grazing fees money. Do you surrounded his property with snipers and shooters, sharp shooters and tasers and dogs and 200 agents? Is that the way to handle it?

KARL ROVE, FMR. BUSH SR. ADVISER, FOX CONTRIBUTOR: No, and nor do you have the majority leader of the United States Senate go out and them domestic terrorists. It both diminishes what domestic terrorism actually is and elevates this and pours gasoline on it. And it's time to lower the temperature regarding the Bundy farm -- the Bundy ranching operation and find a way to settle this.

HANNITY: As a Texan, what do you make of what the lieutenant governor and what the governor said today? I'm in agreement with them. They're not going to back down, either.

ROVE: No. No. Look, Texas is a different situation than Nevada. Texas -- there are virtually no federal lands in Texas. When we joined the union, we kept control of our public lands. And what the federal government is apparently talking about doing here is, along the Red River that separates Texas and Oklahoma, the river moves back and forth, and new land is created sometimes south of the river and sometimes new land is created north of the river.

And what they're talking about is laying claim to all of the land that has been created south of the river during some period of time. And this would be absolutely -- I think the governor -- Governor Perry had it absolutely right. This ought to be settled by common sense.

There's no reason that the federal government should say, We're going to try and establish -- a rim of federal land that may consist of several hundred feet of land or several hundred yards of land south of the river just because it's been created by the natural forces of nature sometime in the last God knows how many decades.

But this is -- this -- if the federal government does this, the Texas Farm Bureau, the Texas Southwestern Cattle Raisers, the Texas Cattle Feeders -- there'll be a bunch of organizations that'll step up and fight this tooth and nail and they'll be backed by the state of Texas. You heard it from our attorney general earlier today and you heard it from our governor.

HANNITY: I think the lieutenant governor's going to be the next governor. Juan Williams...

HANNITY: I'm sorry, the attorney general, Abbott, is going to be -- sorry about that. But Juan, let me go to you. I would think this is something you and I agree on, and that is the issue -- all right, maybe in the case of Bundy, he owes some grazing rights (ph) that his cattle ate government grass. OK. Do you surround his ranch with the 200 agents, snipers, dogs, tasers and go out there to that extent? Does that bother you?

JUAN WILLIAMS, FOX POLITICAL ANALYST: Well, yes, I think it's an overreaction, Sean. So we do agree on that point. I think, though, he was clearly breaking the law. I think it clearly was government land and I think...

HANNITY: There's a better way to handle it, right?

WILLIAMS: But I also don't like the fact that then it became a magnet for people who thought, you know, Hey, it's World War III. They're coming there with guns and they start making outrageous claims about attacking the government.

HANNITY: ... he's got dead cattle. He's got people tasered. They got dogs and they got snipers surrounding his ranch! I mean, over grazing fees! It seems -- look, if every American that owes the government money, including IRS agents that got bonuses that didn't pay their taxes, you know, there'd be an awful lot of agents out there surrounding a lot of people's property!

WILLIAMS: Well, let me just say that if it's a matter of somebody breaking the law in a city or anywhere, I think it should be applied equally. And if, clearly, Mr. Bundy had lost in court...

WILLIAMS: ... I believe three courts. So I don't think there's any doubt...

WILLIAMS: ... he was -- law enforcement had some right to act.

HANNITY: So what do we do, Karl, when -- we're highlighting these cases. I had a couple on from Colorado. They bought property. They owned the property. The government surrounds literally millions of acres that the government had. Government went in, insisted on their little cabin. They lost money on the deal because they couldn't afford the legal fees anymore. Then you got, you know, World War II vets that they want to take their homes that are on the water, prime property that they lived in, in one case, 46 years, because they want to build condos! This isn't for a hospital, a road, a school.

HANNITY: This seems to be government abuse to me, government...

ROVE: We've seen this before. I mean, we had a very important eminent domain case that rose up through the courts that originated in Connecticut.

ROVE: Yes, Kelo, which -- where the federal government -- where local -- excuse me, local authorities were basically saying, we're going to take people's property because we want to enter a public-private partnership to make money. And you're right, the power of eminent domain is necessary, but the power of eminent domain can also be abused. And it clearly is being abused in the instances that you talked about earlier today.

HANNITY: Juan, if they offer people a great value for their land, market value, a little above market value, pay for their moving costs and they need a hospital, a school or a road and it's going to benefit the community, I understand eminent domain. I don't understand when they're taking a World War II vet's property so they can build condos and get more tax money.

HANNITY: Sean Hannity already pays 60 cents of every dollar he makes in taxes there, Juan!

HANNITY: Yes, you did.

WILLIAMS: I set the bomb off. All right.

But anyway, you get my point. Look, if this is in the best interests of the people, of the American people or a local government -- remember, in the cases we're all talking about here, the city council, the state legislature, somebody had to approve it on a democratic basis. It's not as if you have some storm troops coming in and grabbing somebody and taking them out.

ROVE: May I disagree strongly about this? This is a question of degree. And if a local community -- if the leaders in a local community want to seize somebody's private land in order to create a hotel or to build condominiums or to engage in some kind of profit-making venture with private individuals, I think that is an abuse of the power of eminent domain!

If you say, we need to have that because we need to put a road there, fine. If you say, There's no other possible location for this school but here, maybe I'd understand it. But the idea that somebody can grab control of the government of a locality and then use the power of eminent domain to engage in the basest form of crony capitalism, I think is deeply offensive!

WILLIAMS: It's not grabbing, Karl. Karl, it's not -- nobody's grabbing. This is a democratic process...

ROVE: No, no, no! Wait a minute! Wait a minute! There is no vote by the people to allow that to happen. It is somebody inside government, often inside the regulatory apparatus. And look, even if it is the city council, I don't want the city council to come and say, oh, we like Juan Williams's house because we think it'd be a great place to put some condominiums. Juan has to move out because we, the city council of whatever little town it is, have decided that in our greater wisdom, we can make more tax money by doing this! First of all...

WILLIAMS: Karl, you need to have...

ROVE: Most of these do not work out!

WILLIAMS: You need to have faith in elected officials in this country and in this government and in the wisdom of voters. And we select people, it's not some guy locked in bureaucracy in a basement making a decision here.

HANNITY: Why are you bowing at the altar of the right of a government to steal somebody's property...

HANNITY: ... for no public use except they want more tax revenue!

ROVE: Most of these instances are not where somebody runs for office for the city council saying, if you elect me to the city council, I'm going to declare that that World War II veteran's property is subject to eminent domain...

ROVE: ... so we can build condos. In fact, most of these things are done by political insiders...

ROVE: ... insulated from public pressure. If you -- in most instances, where these things come up, where there's eminent domain, where they go in on these kind of things and the public learns about them...

HANNITY: All right, we got to roll, guys.

ROVE: ... a lot of people tend to lose their jobs!

HANNITY: Guys, good to see you.

WILLIAMS: ... in Texas, the attorney general is writing letters. How about...

HANNITY: Good for him!

WILLIAMS: ... our politicians have a lot to say here...

HANNITY: I'm on their side!

WILLIAMS: It's a democratic process. That's the process.

HANNITY: Oh, that's the process? All right. Look, you try and mess with Texas. Good luck to you, my friend. Federal government's going to lose again.