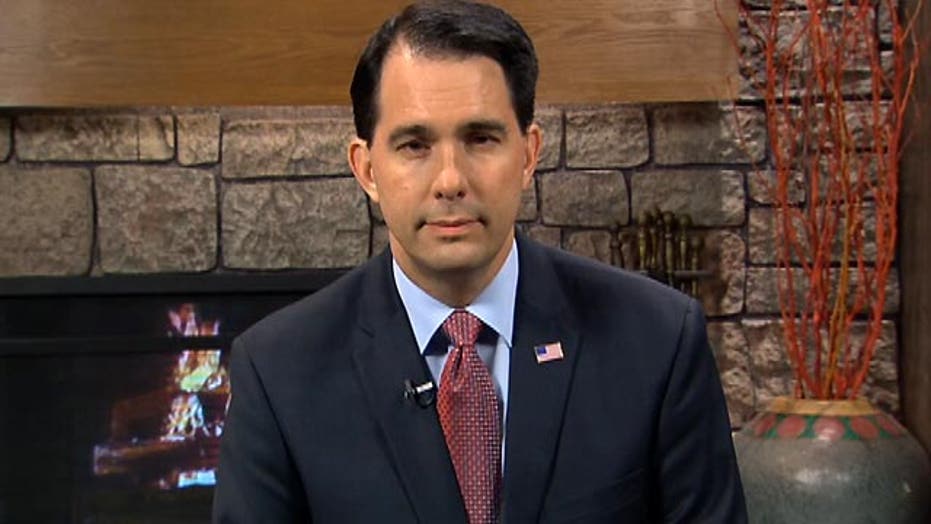 Gov. Scott Walker urges the GOP to 'get out there and lead'

This is a rush transcript from "Hannity," November 7, 2014. This copy may not be in its final form and may be updated.

SEAN HANNITY, HOST: Welcome back to "Hannity." So my next guest, Wisconsin Governor Scott Walker -- he won his third election in four years this past Tuesday, solidifying his rock star status in the GOP. And sorry to break to the Democrats, but Walker is just getting started.

Take a listen to what El Rushbo, Rush Limbaugh, had to say on the undefeated governor's latest victory.

HANNITY: Joining me now, the man himself, Governor Scott Walker. High praise from the master. And by the way, I say ditto. I agree with him. This -- this -- they went at you with everything they had, Governor.  Good for you.

GOV. SCOTT WALKER, R-WIS.: They did indeed. But in the end, we felt here in Wisconsin, and I think across America, people want to be for something, not against something. The people in Washington, the big government special interests, they tried to tell our voters what they were against. We clearly laid out what we were for, for lower taxes, for better schools, for a better future for our children and grandchildren. And people in our state said, "We don't want the Washington top-down artificial government knows best approach. We want the organic, fresh, new, exciting buildup from the ground up approach" that we embraced.

WALKER: Oh, they had everybody. They had Bill Clinton. They had Elizabeth Warren. They had the president of the United States, who came in a Tuesday before the election in a ward that went 99 percent for him in the last election, and they couldn't even up the vote there. They brought in Richard Trumka. They brought in not just the AFL-CIO, but three national union leaders came in from the NEA, AFSCME and the AFL-CIO, and they all said I was their number one target in America.

And I said it was simple. That's because we took their power away, the power away of the big government special interests in Washington, and we put it in the hands of our state's taxpayers, and they didn't much like that. But the taxpayers did.

WALKER: It's tens of millions of dollars. And remember, it's not just what they spent this time. They literally started almost four years ago. On November 2nd of 2010, a Web site was registered called Recallscottwalker.com. That was four years ago.

WALKER: They started in that spring with millions of dollars. They ran the recall election, which cost us something like $80 million, and then they were back at it again this fall.

HANNITY: You know, it's interesting because I was in Wisconsin about four weeks ago, and I was commenting about -- I mean, if you believe the ads, you are the devil. You're Satan, or the son of Satan, one or the other. I mean, they were brutal.

HANNITY: Let's go over -- because I actually think what people like yourself, John Kasich cruise to reelection, Rick Scott -- you got -- look at, for example, in Texas, you got a new governor there. Rick Perry had been there 16 years, Wendy Davis, the so-called star, was going to take over -- Bobby Jindal, Nikki Haley reelected.

What was -- what was the debt when you came into office? What is the debt now? How much have you lowered taxes? And how many jobs have been created? What was the unemployment numbers?

WALKER: It was $3.6 billion in deficit when I came in. We now have about a billion-dollar surplus that this spring, we gave back to the taxpayers. For the third time this year alone, we lowered taxes. Taxes have gone $2 billion lower since I've taken office. Property taxes and income taxes both alike are lower than they were four years ago. Imagine that, property taxes are actually lower in a typical home -- the levy, not the rate -- the actually levy is lower.

HANNITY: Wow! You know, because I think this is a template or a model that should be duplicated on a national level. Give me advice, you would say to -- now that Republicans have control of the House and Senate, don't you think the answer is putting conservative solutions like you used that work for the people of Wisconsin -- isn't that a key component if they want to stay in power?

WALKER: Absolutely, Sean. You'll get a kick out of this. Four years ago, when we came in, everything was Democrat. November 2nd of 2010, we switched it all. My assembly and Senate Republicans came together a few days after the election, and I said, "It's put up or shut up time."

What I meant by that is we flipped everything, and if we were just a little bit less bad than the Democrats who were in before us, the voters would have every right to throw us out. Obviously, we did stand up and lead. We did exactly what we said we were going to do.

WALKER: Get out there and lead, show the American people you can get something done. That's what they're craving.

HANNITY: I was happy about your election.