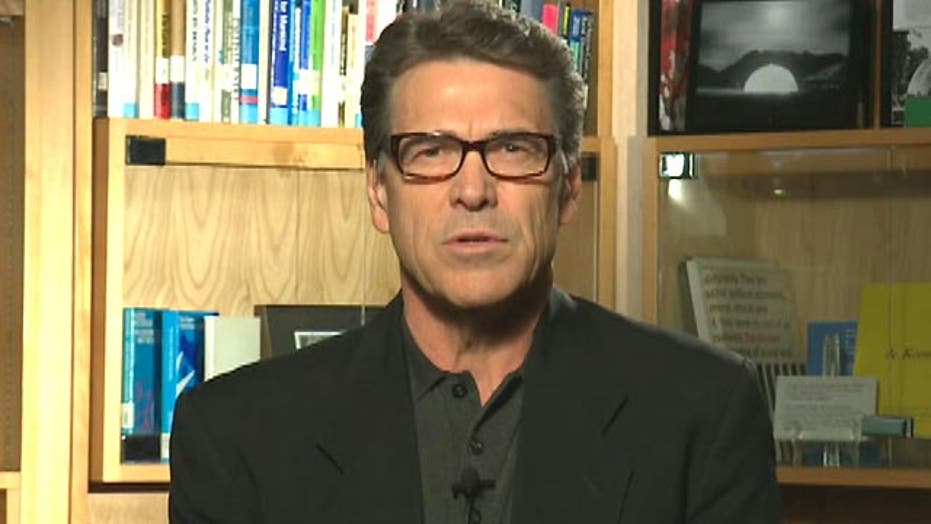 Gov. Perry on securing the border, crises around the world

This is a rush transcript from "Hannity," July 23, 2014. This copy may not be in its final form and may be updated.

SEAN HANNITY, HOST:  Joining me now to outline his plan to actually send the National Guard to the border, Texas Governor Rick Perry. Governor, welcome back.  Good to see you, sir.

HANNITY: Have you heard from the president at all since you met with him when I was down with you on the border? Has he gotten back in contact with you?

PERRY: No. Obviously, we're moving ahead. We're not going to wait for the federal government, whether it's the administration or for Washington, D.C. For that matter. The crisis is full-blown. Everyone understands what the issue is here.

And not only have we been dealing with this for a number of years now, it's come to the point where the details of the criminal activities have become so clear that we no longer can wait for Washington to secure the border. And Texas is going to do it with our law enforcement and with our National Guard.

HANNITY: You know, Governor, I just see this pattern, a lack of urgency by the president! We have a crisis at the border. We've got our closest ally in Israel under fire in a ground war and we're lecturing them to pull back after 1,600 rockets have fired in. We got a VA where our vets are dying, and nothing has happened in the two months since that has been announced. And on top of that, you know, you have Sergeant Tahmooressi's rotting in a prison. He needs medical attention.

What's going on? Where's the president's urgency here? Does that not shock you?

PERRY: Well, there certainly seems to be a hesitancy to act by this administration, but I can't get into the president's mind. I don't know what he's thinking. All I have to work with is what reality is.

And the reality is that Texas citizens are being put in jeopardy by this porous border. And Texans no longer, and I think Americans no longer can see a border that is open for the type of individuals that are coming across.

Sean, there have been over the course of the last five years, since the fall of '08, over 203,000 individuals who have come into Texas illegally that have been booked into our county jails. Those individuals have been accounted for over 3,000 homicides and over 8,000 sexual assaults.

We can't afford to wait for Washington to secure this border. We've had enough, and we're going to secure the southern border.

HANNITY: Governor, you know, I've been down to the border, everywhere from San Diego to the Rio Grande twice now. And my -- the time that I spent with you in the briefing before we went out on a helicopter tour and out with the border patrol, the Texas border patrol, was very revealing.  You had a Navy SEAL. I think his name was J.J., if I'm not mistaken, you know, gave a presentation -- 642,000 crimes, some of them real serious crimes, like you're mentioning here, in seven years against Texas citizens by illegal immigrants.

And the more important aspect to me, as bad as that is, is Yemen, Pakistan, Afghanistan and Syria -- they're catching people from these countries crossing our border. That concerns me. That's a national security issue. Reaction.

PERRY: As we shared with you, the comptroller of public accounts, Susan Combs (ph), who has a ranch our in far west Texas, on her ranch last week, there were three Ukraine individuals that were apprehended on that ranch. So we are seeing, obviously, individuals from countries that have strong terrorist ties being apprehended, as well as individuals who are committing crimes against the citizens of our state.

And those numbers that I gave you, Sean -- those are just in Texas.  We realize that, you know, they're not just stopping in Texas. Individuals with criminal intent on their mind are going into the other 47 contiguous states, as well.

HANNITY: Yes. You know, is it true that right now, because of this influx from Central America and Honduras and Guatemala and El Salvador and elsewhere -- is it true that 70 percent of the border agents are spending time on paperwork and spending time on taking care of those kids, in other words, that it is even more urgent than when I was down there, and that's why you decided to put the National Guard down there?

PERRY: That's one of the reasons. Obviously, having the Border Patrol being distracted from their primary duty, which is to control the border from the standpoint of individuals who would come in, the drug traffickers, the other criminal elements that we see along that border. And the influx of these young unaccompanied children has been a big distraction for the Border Patrol.

So having them back doing their job -- and as a matter of fact, I shared with you last week that the president was not aware that the Border Patrol was even back 40 to 50 miles away from the border and they need to be moved forward. He was not aware of that, and I think he appreciated me bringing it to his attention. I hope he did.

It's the reason I also asked the FAA for the approval to use drones.  And that's obviously -- the president was asked for that approval as well, to use those drones to be able to look down, to make the identification of whether individuals are involved with activities that are inappropriate, and then send those teams in very quickly to apprehend them.

HANNITY: All right, Governor, thank you. We're going to continue to follow this story.

HANNITY: It's a really important one. It's sad that...

PERRY: It is indeed.

HANNITY: ... our government is not doing their job, but obviously, you're going to take care of it on your own end as best you can. We'll be down perhaps again soon. Thank you so much for the tour that we had when we were down with you.