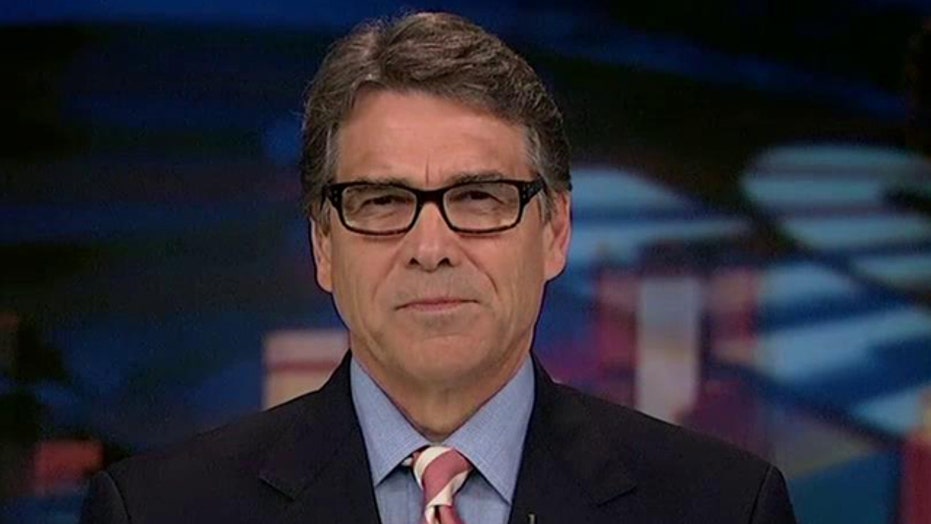 This is a rush transcript from "Hannity," September 18, 2014. This copy may not be in its final form and may be updated.

SEAN HANNITY, HOST: Amid new concerns about terrorists entering and exiting the U.S. freely, the top Democrat on the House Intelligence Committee, Dutch Ruppersberger -- well, he recently told The Washington Examiner, quote, "There was an American that went over, was radicalized, trained to be a suicide bomber and then came home to see his parents, left, went back, and when he went back, he killed himself and a lot of people. That's an example of what's concerning to us. When you have a passport, you can go back and forth with impunity."

Here with reaction to this new news tonight is -- Texas Governor Rick Perry is with us. Governor, Welcome back. Good to see you.

GOV. RICK PERRY, R-TEXAS: Sean, it's good to be with you. Thank you.

HANNITY: Governor, I sat there with you in that intelligence briefing -- Yemen, Syria, Pakistan, Afghanistan -- now, here it is September the 10th, and we discover that four people literally cross the border, four individuals with terror ties that they've had in the past. It shouldn't be a surprise. Not a surprise to me after sitting through that briefing. Is it to you?

PERRY: No, it's not a surprise. And it's the reason that we have been bringing this to the attention of the federal government for some time and the actions that we've taken not only back in the earlier part of this year, when we moved our Department of Public Safety troops down there and the Texas Ranger recon teams, our Parks and Wildlife wardens, and then obviously, we bolstered that with the Texas National Guard to go down and augment, as well. And the result that we've seen is, you know, a substantial decrease in the number of apprehensions. So the message is getting back.

But with that said, I think not just Texans but Americans are still -- and they should be -- substantially concerned that the southern border of the United States and Mexico is potentially a place where radicalized terrorists could penetrate into the United States with intent to do harm to American citizens.

And that's the reason that the federal government continues to fail, from my perspective, in securing that border, putting the resources there that we know can make that border substantially more secure than it is today.

HANNITY: So clearly, the Guard that you put down there, the Texas Guard, you're saying, has had an impact inasmuch as the word has gotten back, Don't come here because you're going to get caught.

PERRY: Right. That's correct. And your common sense tells you that that's how it works. It's how it works in a neighborhood. That's how it works on an international border. If you will put the resources there, the boots on the ground, the technology in the air -- again, we've had this request in to the Federal Aviation Administration for some period of time to allow for the use of drones to look down to identify the activities that are going on, so you can send fast response teams in to meet the threat, whatever it might be. And they've refused to do that.

Again, I just don't think we've got the -- I don't think we've got the federal government's agreement that this is as big a problem as what a lot of us in this country -- and I can assure you that those farmers, those ranchers, those individuals who have seen these people penetrating across the border, crossing their land, and then that's not to mention the thousands of criminal activities that have gone on by individuals who come into the state of Texas and then go across this country and committing criminal acts.

HANNITY: Let me ask you, for all the talk about dealing with ISIS and sending troops over to Iraq and at least involved in air campaigns, if we're catching terrorists at our border now -- and as I sat through the briefing with you, and they're coming from Yemen, Syria, Afghanistan, Pakistan -- can you explain to me why there's not a level of urgency placed on this, considering that is our most vulnerable area in terms of where enemies of this country can cross?

PERRY: I can't. I think this country is capable enough to multi-task and to deal with ISIS and with our allies over in the Middle Eastern region. We need to use, obviously, every tool that we have to destroy these individuals and destroy them there, take out their command and control. We can do that with air strikes. We can do that, obviously, with the Peshmerga, who is a great fighting force that's in the northern part of Iraq.

A secure border allows for you to have economic security, as well.  Those that would say that, you know, somehow or another, you're putting people on the border and that's hurting the economic side of this -- they're wrong.

PERRY: ... northern -- or excuse me, our southern border.

HANNITY: You were called reprehensible and said it was an attack on good relations by the president of Mexico. You fired back a pretty hard- hitting letter to him yesterday. You want to tell us about that?

PERRY: Well, Mexico has been a long-time partner with the United States, and particularly with Texas. They're our number one trading partner. We have some great opportunities. This president has put into place in Mexico some reforms that are really good for that country, when it's coming to opening up their oil and gas industry, for instance.  They've done some things that have been very, very forward-thinking.

But with that said, they still have some challenges. And if we're going to be good partners, if we're going to be good neighbors, then we ought to be able to have a civil, thoughtful conversation about how to address these issues. And they are failing in their securing of their southern border. I mean, all of those children, all those individuals that are coming across that we saw in May and June, July -- that was because Mexico has failed in its responsibility to secure their southern border.

PERRY: And so when I bring that up to this president, he needs to understand that we're serious about this. We're going to be good neighbors. We're going to try to be great trading partners.

HANNITY: I just think you need...

PERRY: We're going to point out where they're failing.

HANNITY: I think you also need to point out to them what they do to illegal immigrants from Central America. They put them in jail and they send them right back. So just tell them we're just going to follow their laws, so -- all right, Governor, good to see you. Appreciate you being with us.